Earlier this month I wrote about my trip to New Orleans. I had so much fun that I had to split it up into two posts- one about iRetreat conference and exploring the French Quarter, and one about my swamp tour. Today, as part of Netflix’s #StreamTeam (for which I receive a free membership and some extra fun freebies), I’m going to share my tour of New Orleans, American Horror Story-style! 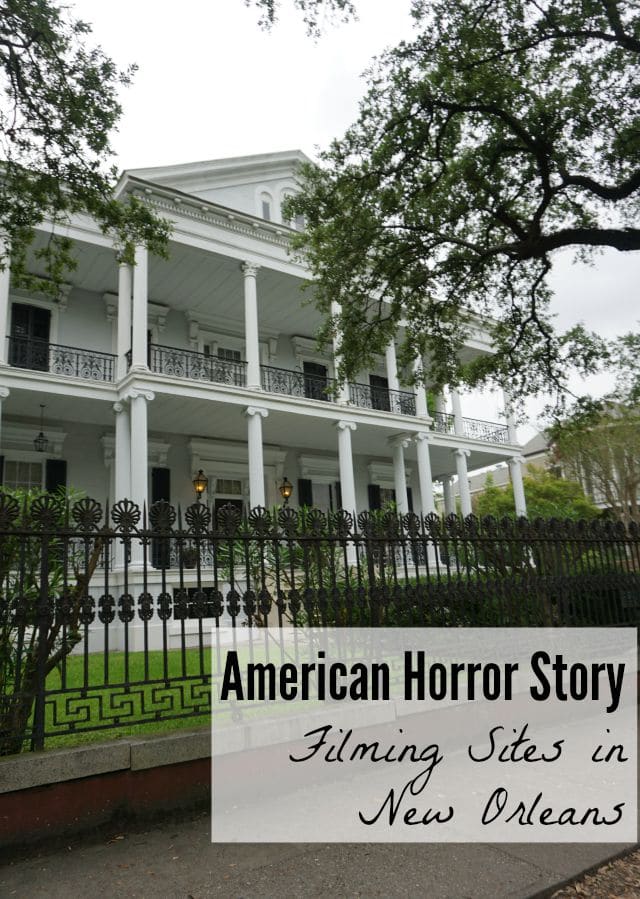 I was already excited to be visiting a brand-new (to me) city, but one of my favorite shows was also filmed there! Some time last year I was folding laundry, and I was caught up on all of my shows, so I opened up Netflix and decided to try something new. A lot of my friends had been talking about American Horror Story on Facebook, so I started Season 1, Episode 1.

Well, I was already a horror fan so I was hooked right away. I binge watched season 1, season 2, and then I started catching up on the then-current season, season 3, which was American Horror Story: Coven, and filmed in New Orleans. 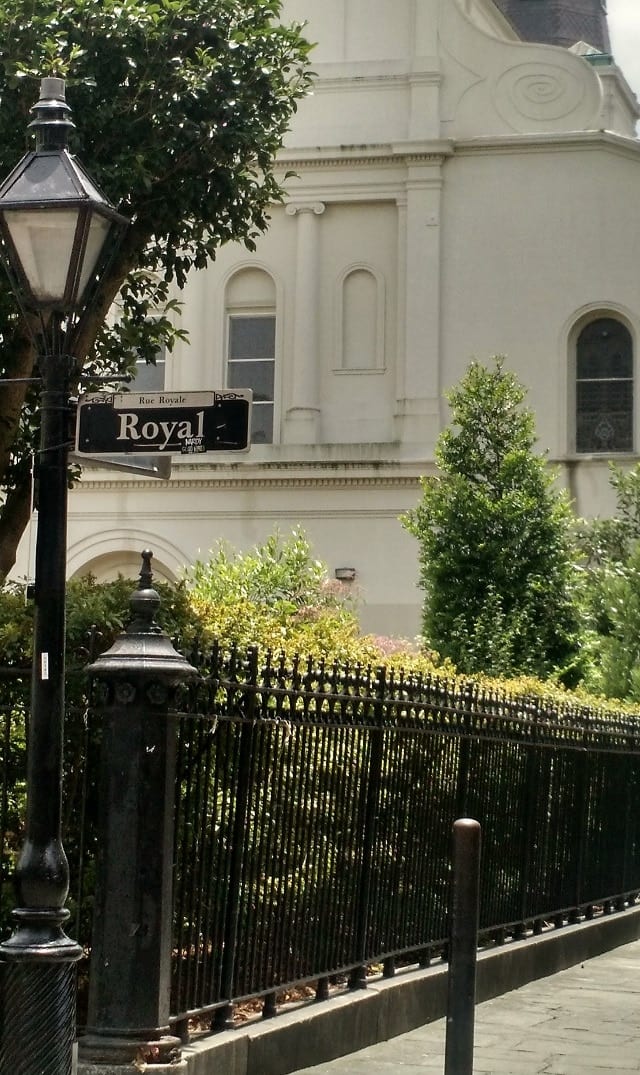 So after my conference ended, I headed out to see all the filming sites I could see. I started my tour on Royal Street, which can be seen several times, in different episodes.

First, I walked over to Vacherie Restaurant. You can see the witches walk right past this corner at the end of the first episode. 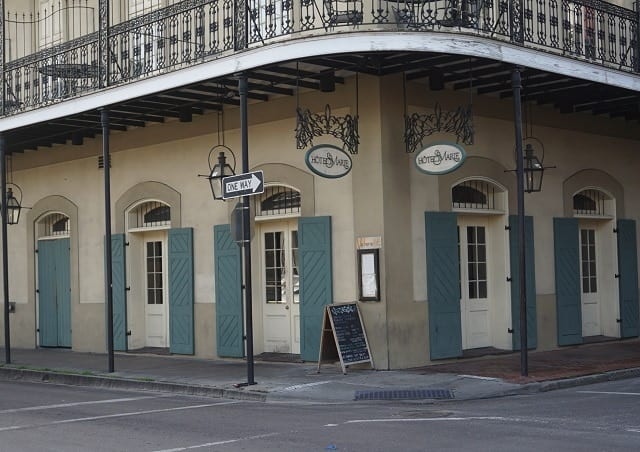 Backing up a bit, earlier that morning I enjoyed some beignets at Cafe Du Monde, and I could see the Crescent City Connection (the bridge in the distance) from where I stood looking over the water. In episode two, Zoe drives Kyle over the bridge to the swamp. 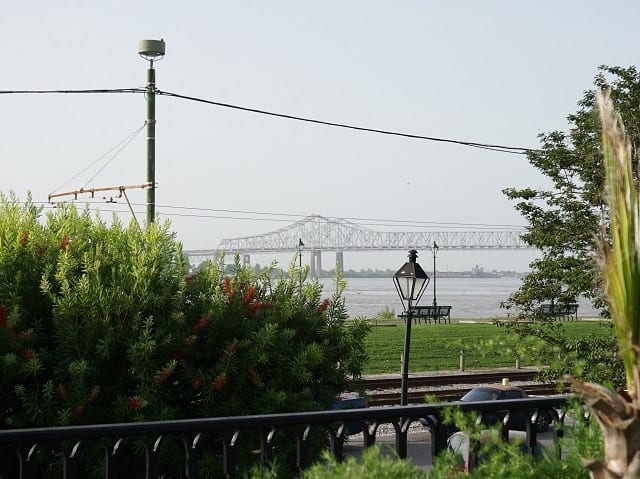 Walking up Royal, I made my way to the Lalaurie Mansion, the actual house where Kathy Bates’ character lived. Madame Lalaurie was a real person who allegedly tortured her slaves and skipped town before getting caught. 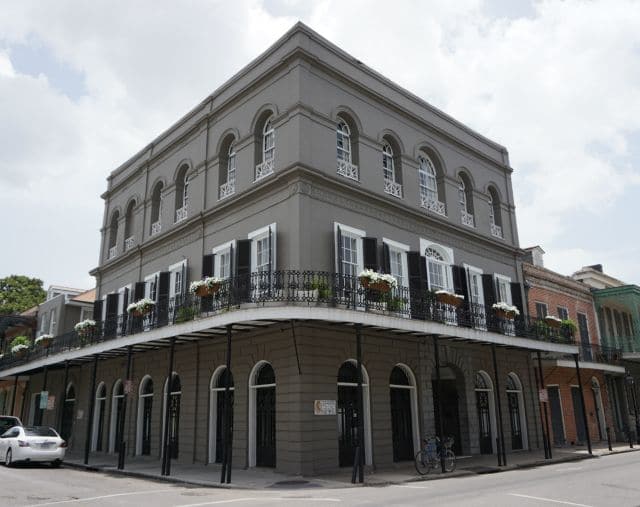 This gorgeous building sits on a corner and is currently a private residence. The actual Lalaurie Mansion was not used in filming, but it is a regular stop on all the ghost tours in town.

The Gallier House, which sits adjacent to the Lalaurie Mansion, was used in filming for exterior shots of the mansion. 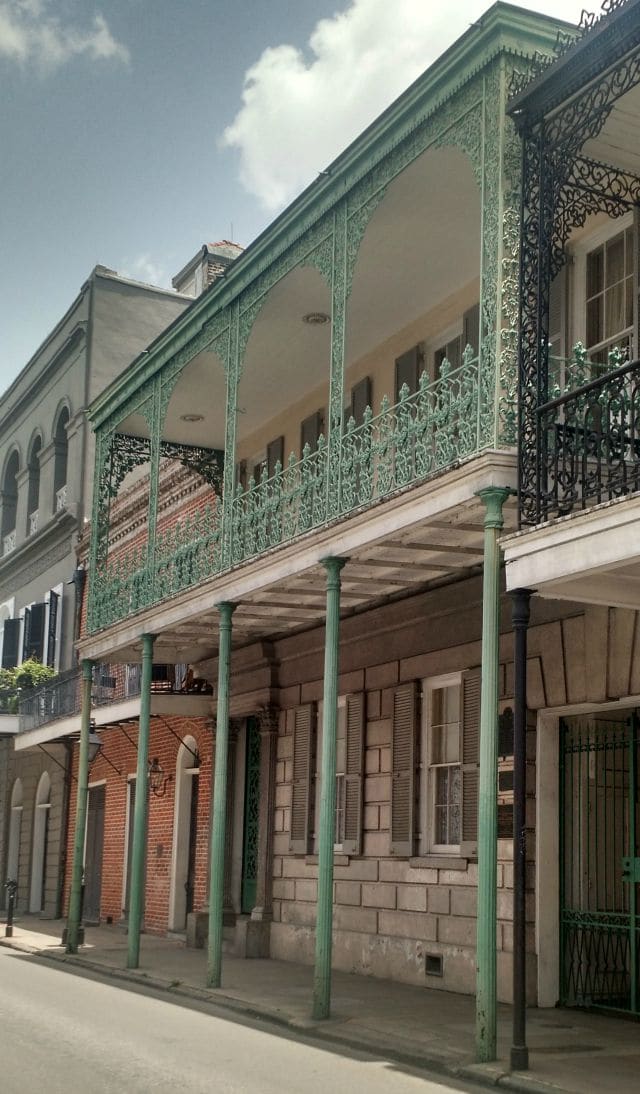 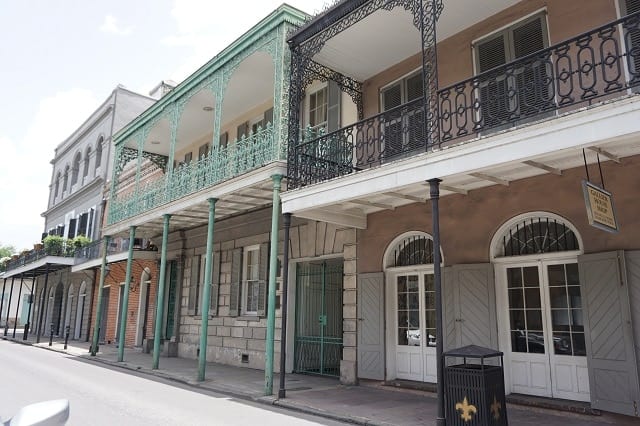 Above you can see the Lalaurie Mansion, Gallier House, and the “Gallier House Shop” where you can enter for tours.

The Hermann-Grima House, however, was used for the interior shots of the Lalaurie Mansion in the show. That house is pictured below, though the exterior was not used in filming. 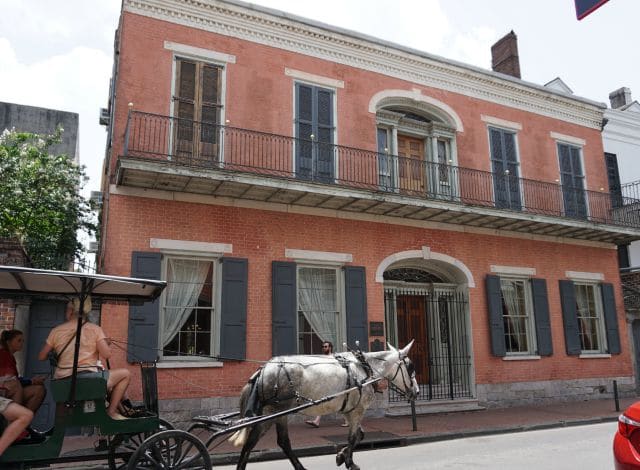 Both the Gallier House and the Hermann-Grima Houses offer tours, and they are managed by the same historical society. In fact, if you want to tour both, you can get a discount on your second tour.

I just wanted to tour the Hermann-Grima House, so I could see the interior where scenes were shot. The Museum and Shop next door (pictured below) is where the tour began, and that building also includes the original stables that were used by owners of the home. 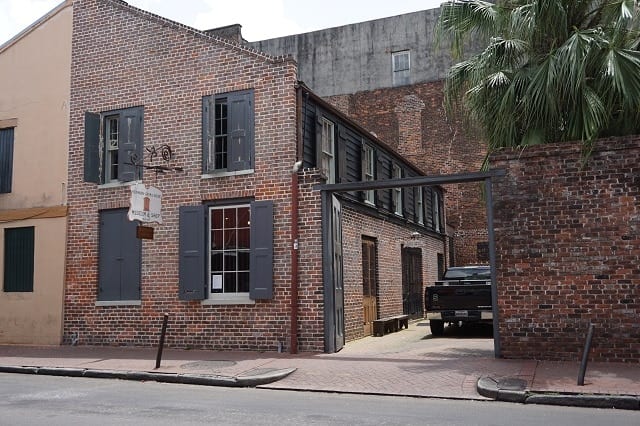 Below you can see the entrance for the tour and the Hermann-Grima House, beyond it. 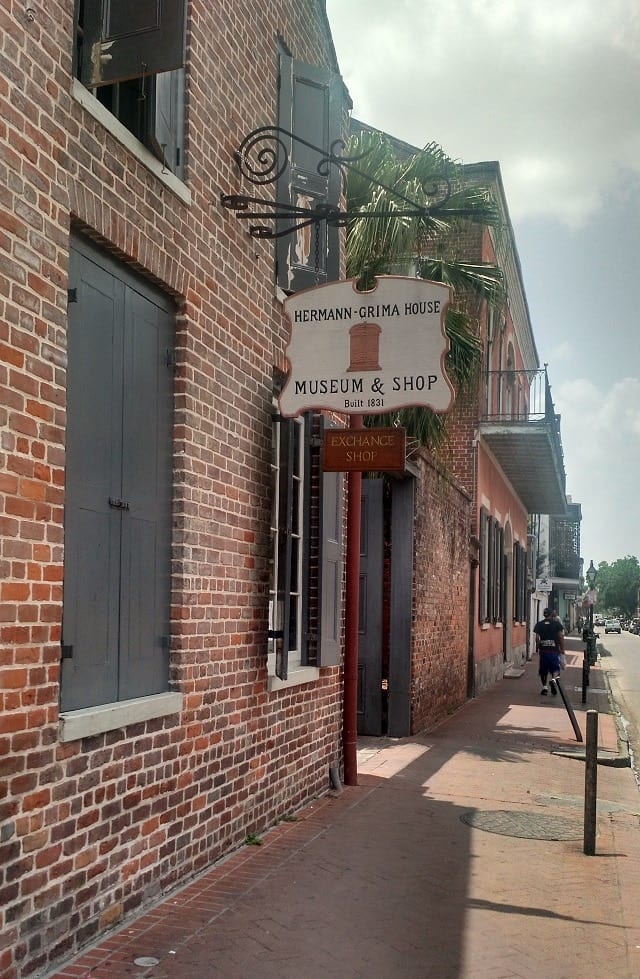 Unfortunately, we were not allowed to take interior shots on our tour, but if you are ever in New Orleans, and you are a fan of the show, I highly recommend taking the tour! They actually did not mention the show on the tour at all, but several of the rooms are very recognizable, and the historical information alone was very interesting. 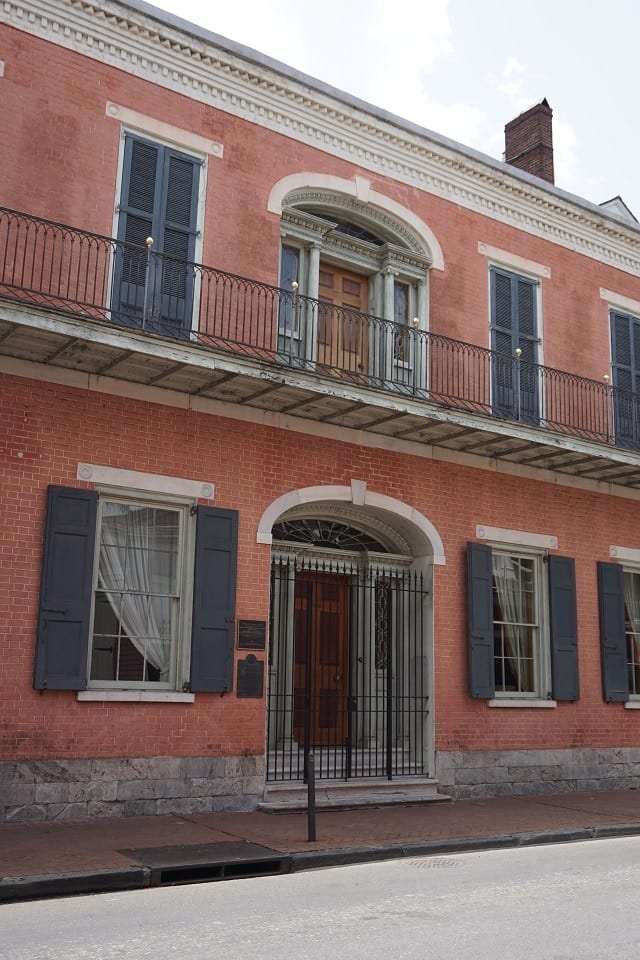 You can visit the website for the two houses, and even see a virtual tour of the Hermann-Grima interior (which you will recognize from the show, for sure!). As soon as I got back to my hotel room, I started up episode one, and I sat there going, “Oh my gosh, I stood right there! I saw that piano! I saw that mirror! I stood where Kathy Bates stood!” #fangirling

Later that afternoon, I took the streetcar to the Garden District, got off on Jackson Avenue, and I walked down to the Buckner Mansion, which you may know as Miss Robichaux’s Academy for Exceptional Young Ladies. 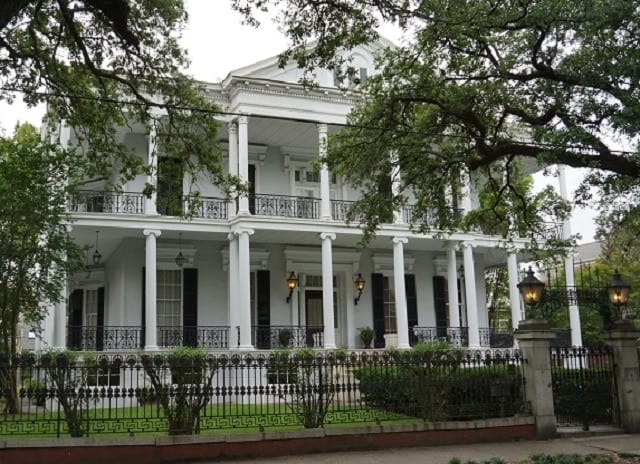 My first impression was that the front yard was so much shorter than it appeared in the show. But the house was instantly recognizable, and completely gorgeous. This, too, is a private residence and cannot be entered, but I wasn’t the only AHS fan outside taking photos! 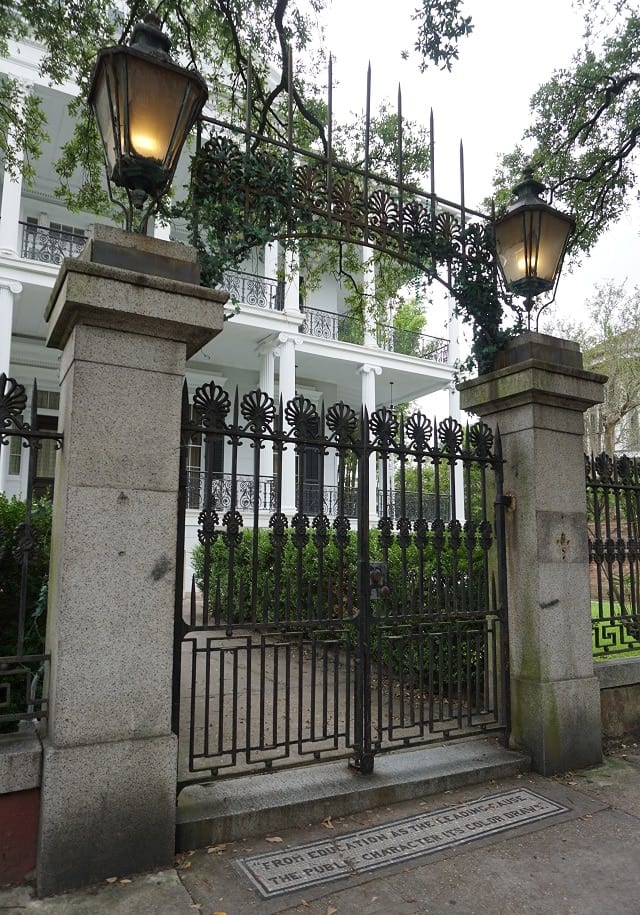 After taking photos and admiring the Buckner Mansion, I walked down Magazine Street quite a ways, to Louisiana Avenue, and I found Atchafalaya, the restaurant where Fiona and Madison have brunch, in episode three. 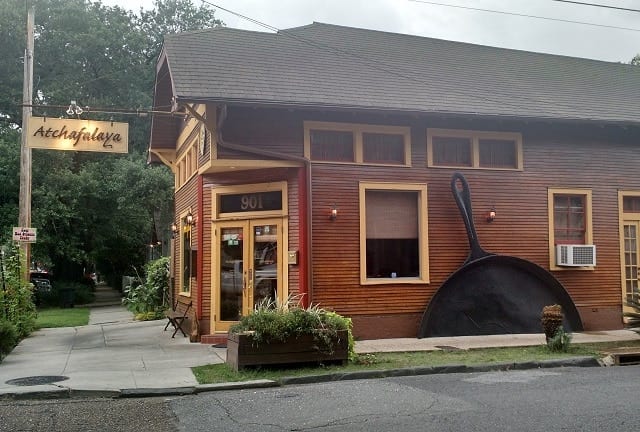 The witches dine at a table on the street, maybe the same one I saw stored on the side porch (it was about to rain), and Madison makes a random guy stop and stand in the middle of the road. I rewatched the episode, and the place he crosses is perfectly visible in some of my photos.

There are lots of other locations to visit in New Orleans, including the cemetary where they filmed some scenes, and the cemetary that houses Marie Laveau’s actual tomb. These are just the places I was able to make it to during my visit.

For more in-depth information on these locations and others, I highly recommend this Deep South Magazine article, which is where I got most of my information for visiting the sites. 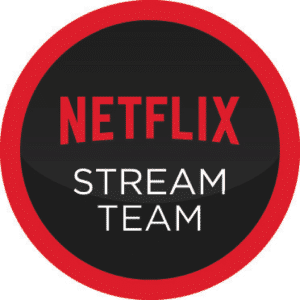