If you know me, you know I love to organize. Give me a junk drawer and a can of coke, and that sounds like a pretty great Friday night. Well, what’s the one room in the house that is filled with lots of tiny things and a few tiny people who like to strew them all over the place? That’s right, the kids’ room! Here is how we have gone about organizing toys.

A few months back, my husband and I decided we had to come up with a new way of organizing toys that would help to keep the mess under control, but which also allowed our kids to see the toys they have, easily get out what they want to play with, and pick them up themselves.

Let’s start with a look of how our kids’ room usually looks: 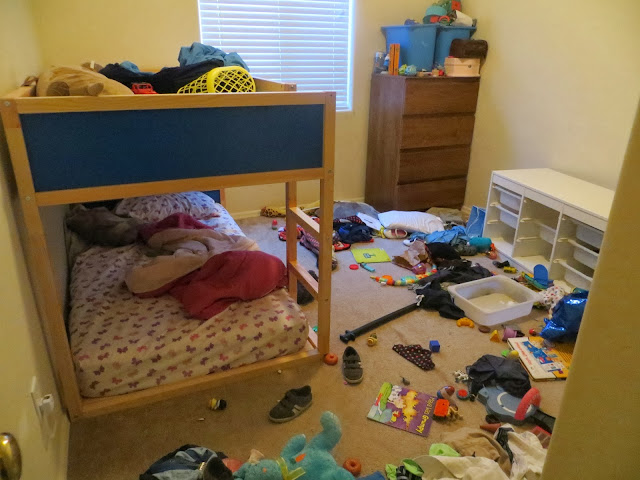 Unless you are a mom wizard or spend 23 hours a day picking up toys, this is probably the reality if you have small children. The solution for organizing toys is to streamline a quick and easy way to pick up.

Our main solution came from IKEA, but I’m sure similar items can be found in other stores. We use the Trofast storage system for organizing toys, which looks like this: 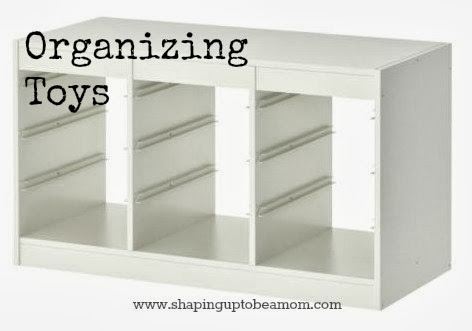 I love this guy, because he can hold a variety of different-sized bins. You could put in three large bins, one small and one medium in each section, a total of nine small bins, or some combination of the above. They also make a wood version which looks really nice, but white matched our kids’ room. 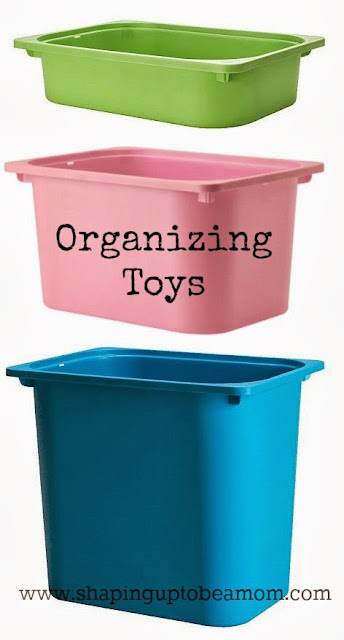 We started with two large bins on either side and three small bins in the middle. The large bins held two different train sets, and the middle bins held “guys” (superheroes, Disney characters, etc), fake food, and vehicles. Yes, we have a boy.

As the kids got a little older (and we added a girl), the trains didn’t get used as much, but they were taking up a lot of real estate, so we opted for six more small bins, so that we could separate the rest of the toys a little better.

Here is what our Trofast guy looks like today: 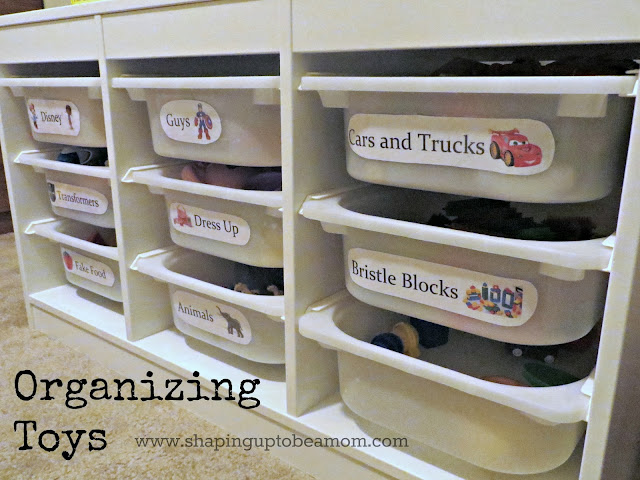 The labels we just printed off the computer and affixed with packing tape. The use of words and pictures means that my two-year-old can pick up her toys, because she can see the pictures and know what goes in which bin. At the same time, my five-year-old who is starting to read can use the pictures to learn some new words.

Also, since these bins are interchangeable, the labels leave no question as to whether the fake food goes in the middle of the first section, or the bottom of the third section. Wherever the label is, that’s where the fake food goes!

Cleanup is easy. Because the bins are already organized by type, there’s no more organizing to do- just toss the toys into their bin. When I want to clean up fast, I just sit by the toy box and have the kids toss me all the toys in the room. and I put them rapidly in their bins. The Trofast system includes lids that fit these bins, if you think that would be a good solution for you, but I thought it would just cause extra clutter.

While the toy box does hold the majority of our kids’ toys, it doesn’t fit the largest items. You could always store those on the top of the box (I also love this one because you don’t have to flip the top open to use it), but we like to keep the top free for playing on. Instead, we utilize the kids’ closet for help in organizing toys. 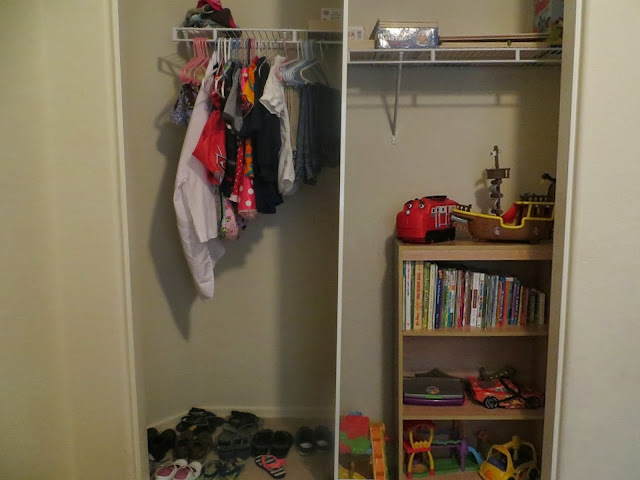 Puzzles and games go on the top shelf of their closet and only brought down when they want to use them. Outside toys go…outside! We also keep a couple of bins in the garage of older toys that they have grown out of, but which we will use for our younger kids.

This is how we go about organizing toys. It works for us because it means that all of their toys have a place, and while it’s easy for them to transport them to and from the living room, none of the toys “live” in the living room. 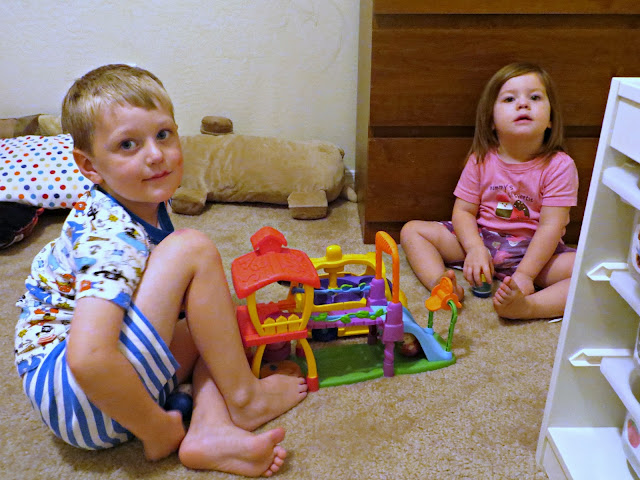 Make Over Your Medicine Cabinet

This 1-Minute Hack Will Save You Hours

They are getting so big!

Great idea!!! I need to make little labels like that for Elijah’s buckets. Brilliant!