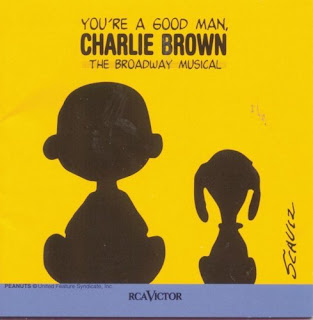 A week or two ago I got an advertisement on the Tucson Theatre mailing list from the director of my audition #6, and who has worked with Daniel in the past, saying he needed a choreographer for his middle school/high school production of You’re a Good Man, Charlie Brown.

I happened to be free during the rehearsal times, and that is one of my favorite shows, so I emailed him my resume, and he hired me! We met a few times to talk and fill out paperwork, and Thursday was the first rehearsal I went to.

It is going to be a great experience, I can tell! First of all, I’ve come to realize that, as far as theatre goes, choreographing is really my strength. I’m a good performer, a good singer, actor, and dancer, but I don’t consider myself to be outstanding at any of those. In fact, one of my better attributes as a performer is that I CAN do all three, whereas some people are extremely talented in one area but not so much in the others. Anyway, especially as I’ve been working with Daniel as his show choir choreographer, I’ve realized that people have different strengths. Daniel is a really great teacher and leader, and I’m a very good choreographer and second-in-charge. He’s good at writing the music and making the decisions, and I’m good at creating and teaching dances and having a good eye for fixing things. Maybe I just like the responsibility without the accountability…? :) ANYWAY…

The kids in the show seem really great, and they are a little rambunctious, but for a musical I’d rather have that than kids who are too inhibited! They picked up my choreography a lot better and faster than I expected them to, and I think the show is going to be fabulous. The director cast it VERY well, and there is some real talent there. He got the two nerdiest boys in the school to be double cast as Linus, the two sickeningly sweetest little girls to be Sally, and a wiry little boy to be Snoopy, who I know will just go to town on “Suppertime,” and the boy cast as Charlie Brown is super talented and a great leader for the rest of them.

I’m so excited to be doing all the numbers. I’ve always wanted to choreograph this show, and now I am! I was listening to the soundtrack in my car the other day and I kept thinking, “Oh, I can’t wait to do this song…oh I can’t wait to do THIS song!”

I think the show is going to be outstanding, and I hope everyone will come to see it. It will be performed the weekend of January 30th. I’ll post more details as we get closer!

Get in the Holiday Spirit with Ghostlight Theatre

Tap Your Heart Out

Sounds like fun. I am sure it will all be AMAZING!!! Me and Elise will totally come and watch it in January. Can’t wait to tap tonight! ;)