I thought it would be hard to come up with ten songs that could serve as the soundtrack to my life, but it only took me a few minutes! These songs are not necessarily my top ten favorite songs, though some of them would be likely contenders, but they are all special to me in some way or another. For some, it’s a lyric that hits home, and for some it’s the association with an experience or time in my life. 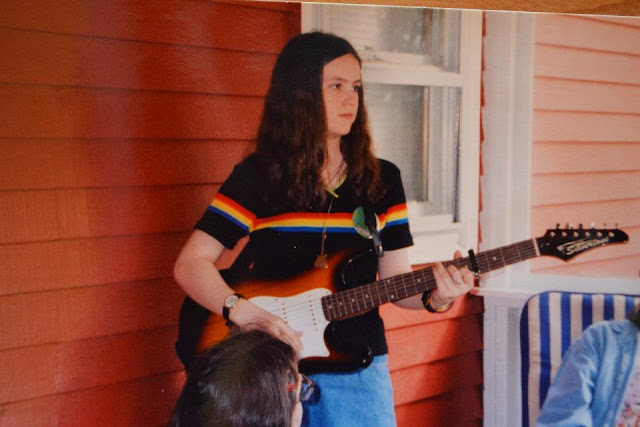 In no particular order:

“One minute you’re waiting for the sky to fall,
the next you’re dazzled by the beauty of it all.”

The version of this song that is on the Greatest Hits album is a live version, and I used to listen to it on my Discman (90s list, coming soon!) while walking home from the bus stop in middle school. As soon as they begin the song, the audience erupts into massive applause, and I used to blast it into my headphones and pretend the applause was for me as I turned onto my street.

“Live right now, and just be yourself.
It doesn’t matter if it’s good enough for someone else.”

4. “The Next Ten Minutes,” Jason Robert Brown, from the musical The Last 5 Years

A song where a couple decides they want to spend the rest of their lives together, from one of Daniel’s and my favorite musicals.

“Will you share your life with me, for the next ten minutes?
…and if we make it til then, can I ask you again, for another ten?”

5. “No More,” Stephen Sondheim, from the musical Into the Woods

“Running away, go to it. Where did you have in mind?
Have to take care, unless there’s a where,
you’ll only be wandering blind.
Just more questions. Different kind.”

“The sun is up, the sky is blue
it’s beautiful, and so are you.”

So very many nights during my middle school/high school (read: formative, hormonal) years I fell asleep listening to music, and this was one that I listened to a lot. Really the whole album (greatest hits).

8. “I Get To Show You The Ocean,” Georgia Stitt

I sang this to my kids before they were born and while they were little babies. I grew up on the beach, and now that we live in a landlocked state, I miss it! Luckily I’ve had the opportunity to take both kids back to my hometown and show them where I grew up, and take them to the beach. I hope I can continue to do this as they grow older.

“I get to show you the ocean. Tomorrow morning we’ll start.
Let’s wake up early and search for a starfish.
I’ve got your swimsuit. And you’ve got my heart.”

Pretty much I just love this song. It’s like modern Motown, and that’s cool by me.

10. “The Schmuel Song,” Jason Robert Brown, from the musical The Last 5 Years

This is a long, somewhat silly parable song, but it turns emotional real fast as the husband encourages his wife to follow her dreams. Daniel and I saw this show live recently, and I was kind of on the fence about how much I was going to allow myself to get emotionally involved in the performance, but when the actor (our friend) sang the last 14 words of the song (which is pretty much the basis of Daniel’s and my marriage), I completely lost it and just sobbed into a kleenex, trying to be quiet!

“Have I mentioned today how lucky I am to be in love with you?”

Gotta go! After writing this list and reminiscing, I’m in need of some more kleenex!

WIW: To Get A Haircut

I love posts like this! It’s so much fun to reminisce.

I LOVE THIS!! Yep, number 8 made me cry! Couldn’t even get past the title of the song. Those sweet grandkids will definitely grow up knowing the wonders of the beach!!

I mostly took songs from my current play lists, now I see so many good songs from middle school and high school that I should have included! Great list :)

Oh my my my Megan.
I did The Last 5 Years about 6 years years ago (REALLY tough to sing!) And I LOVE your choices from JRB. Amazing. ‘Schmuel’ is such a great little tale, and the closing line got me every single night. Ah-mazing.

The Beatles, Barenaked Ladies AND Simon & Garfunkel!? Love this list!! <3

I love your list! Your reasons are so sweet and really thoughtful. I had a sweater just like that when I was a teen too!

Thanks for linking up! Love your list. – <3 your newest follower.