Running your own summer day camp? Hillary is back with some fun sport games kids will love! These are perfect for a sports-themed week at summer camp, daycare, preschool, or homeschool! 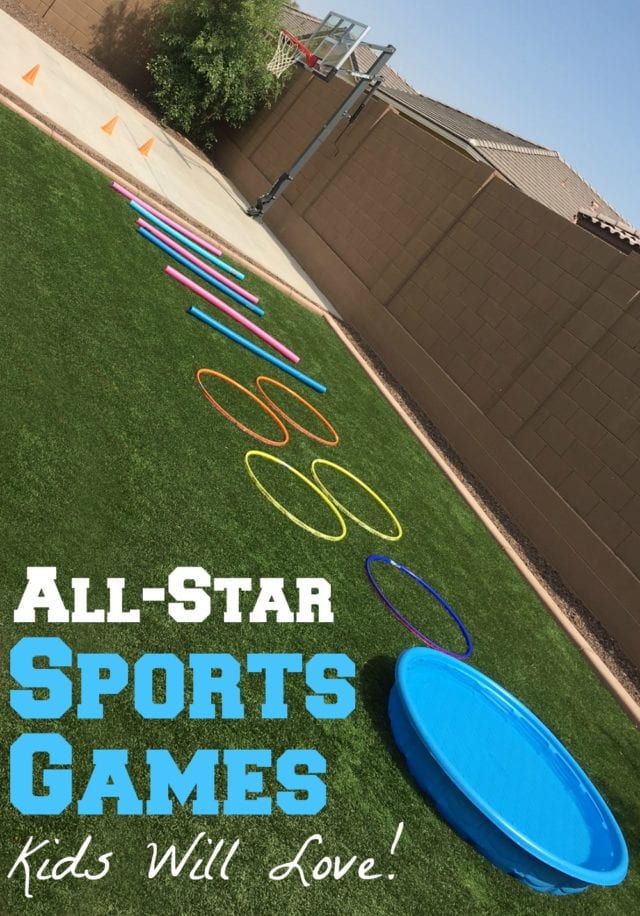 Sports week was a huge hit! We actually had to waitlist kids because so many were interested in attending. It was a favorite for the kids as well as for me. We had an absolute blast!

There are so many different things you can do with a sports summer camp week. We did three themed-days: Baseball Day, Basketball Day, and Football Day. This helped me plan and organize better because I could focus activities on these specific sports.

For sports week we were outside in my backyard almost the whole time. In Arizona. In the summer. And of course we were having record-breaking heat- pushing 120 degrees! I had to get a little bit creative so this is how we did it.

I had a baby pool in my backyard filled with water and water balloons. I had a baseball diamond set up and a plastic wiffle ball bat. I split the kids up into two teams and explained the rules of water balloon baseball.

The rules are super simple. Each kid gets three pitches. If they explode all three balloons then they get a home run. If they hit the balloon and it doesn’t explode, they get one base per hit. Every kid on the team gets to get a turn batting, and then we switch teams. The kids were super into keeping the score so I didn’t even have to worry about that.

Note: I highly recommend buying the pack of water balloons that tie themselves. They are about $7-$8 dollars for 100 balloons, but they are worth the price!

Next, we did a basic water balloon toss. The kids partnered up and tossed a water balloon between them, backing up one step each time they successfully tossed and caught the balloon, until it burst on one of them!

Next, we had pitching practice. This was basically a way for all of the kids to go wild and crazy throwing water balloons but not throwing them at each other. They all got to throw balloons at the “strike zone” drawn on my back fence until all water balloons were used up.

The hour and a half went so fast outside that it was already time for clean up. Once all of the water balloon pieces were picked up I handed out otter pops. This was great motivation for the kids to pick up all of those little pieces of balloon! The best cleaner-uppers got to pick their otter pop color first! 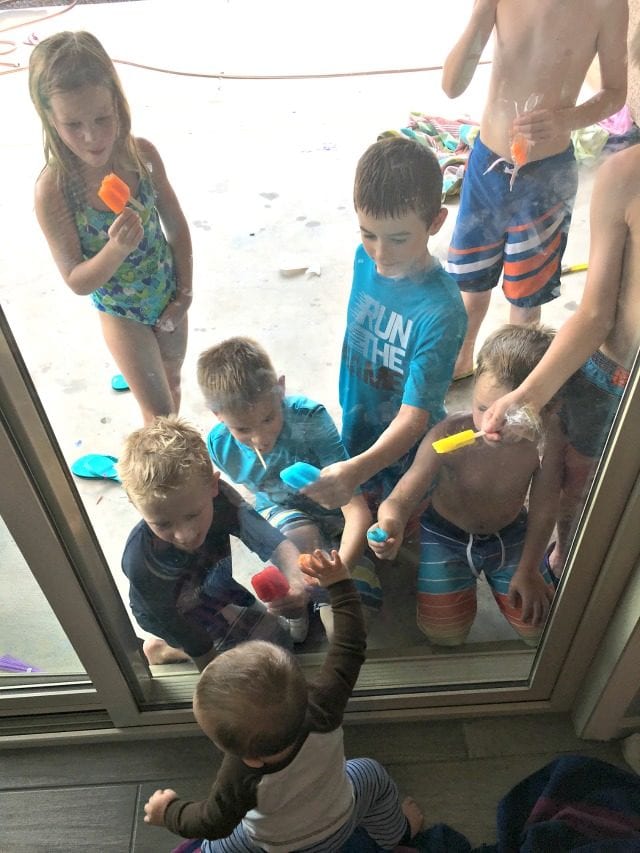 Next up it was time for our cool down activities inside. We made “bats” with paper plates and popsicle sticks. Each kid got their own bat and their own balloon (no water this time!). They took turns in pairs pitching to each other and hitting home runs.

After they were done with that, we played indoor volleyball with a balloon. I tied a string across my family room, and the kids had to keep the balloon in the air. As the game got easier, I added more balloons.

I set up an obstacle course in my back yard using pool noodles, a baby pool, hula-hoops, cones, and our basketball hoop at the end. 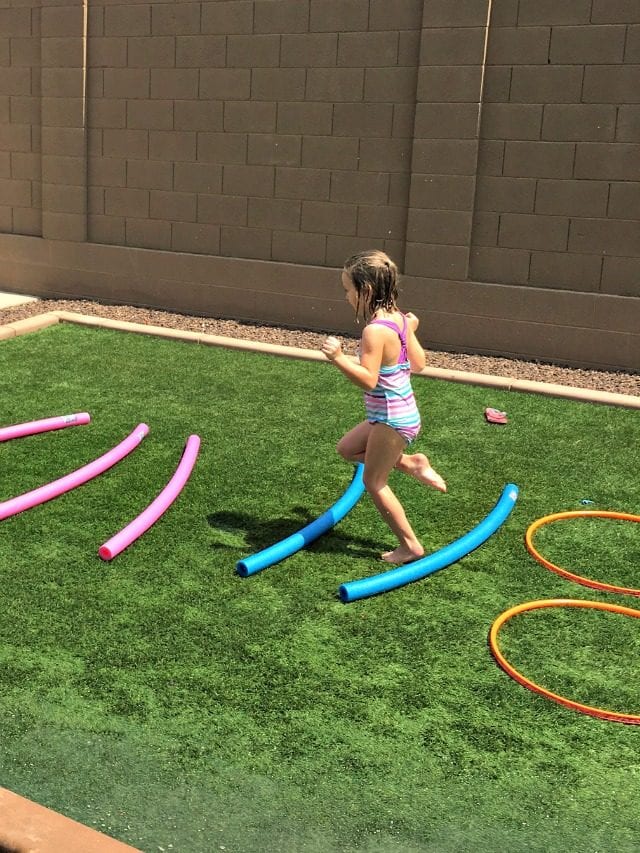 The kids lined up and when it was their turn to go they had to dunk themselves in the baby pool, hop over the pool noodles, high step in the hula-hoops, dribble around the cones, and shoot a lay up at the basketball hoop!

After the obstacle course, we cooled down with some water races. I split kids into four teams. Each team had a bucket they had to fill with water…by using a plastic cup full of holes!

We did it relay style so when it was their turn, they ran to the baby pool, filled up their cup, ran to their bucket with their cup over their heads, dumped the remaining water from their cup into their bucket, then ran back to their team and tagged the next person in line. 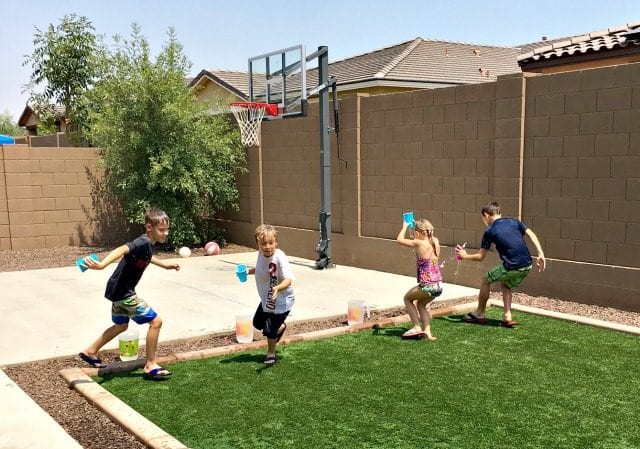 I was the judge watching the buckets to see which team had their bucket overflow first. We played that game a few times because it was so fun!

After all the outdoor fun, we came inside to dry off, cool down, and make hamper hoop basketball hats! 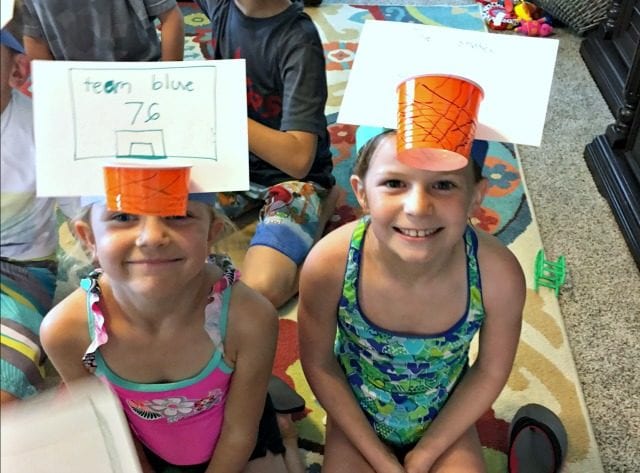 These were a huge hit for the kids and for the parents. Think of the game Hedbanz, but instead of a card it’s a basketball hoop! This was super easy to do! 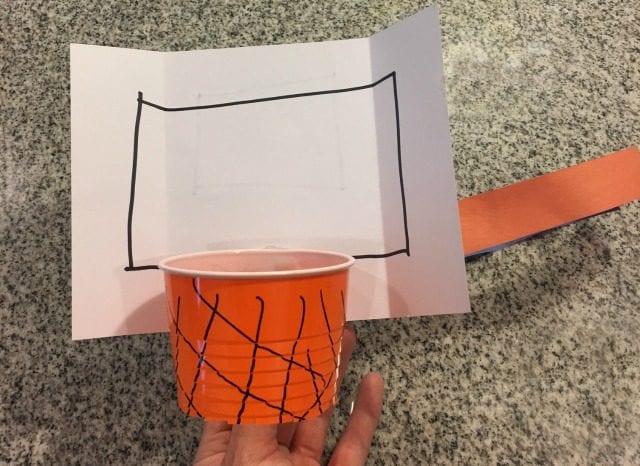 The last day of our sports week was Football Day. We started out having the kids line up and run wide receiver drills.

I had them run a wide receiver “route,” and when they turned around I threw them the football (we used water balloons again!). We had kids who were waiting in line be pretend defensive players to make it harder for the wide receiver.

The younger kids didn’t seem to care about points, but the older boys were looking for a victory!

I found a picnic blanket at Walmart and cut out different shapes and awarded each shape a different point amount. On their turn, they tried to throw a water balloon through one of the holes. 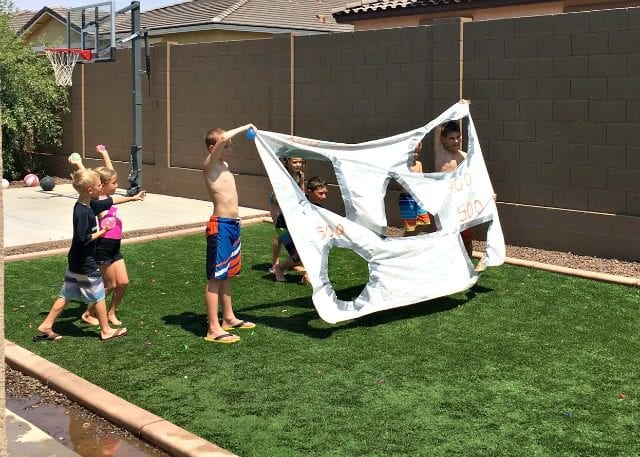 Kids took turns tossing, catching, and holding the tarp up high. Whatever water balloons I had left after this I let the kids play catch with, and then had them do quarterback “drills” at the wall (aka throw the water balloons at the wall!).

After they picked up all of the water balloon pieces, we had otter pops and snacks!

After we were good and sweaty, we came inside to cool down and make our football kickers!

Any football fan knows that sometimes a game comes down to a field goal kick. We made our kickers “catapult-style” out of popsicle sticks and rubber bands. 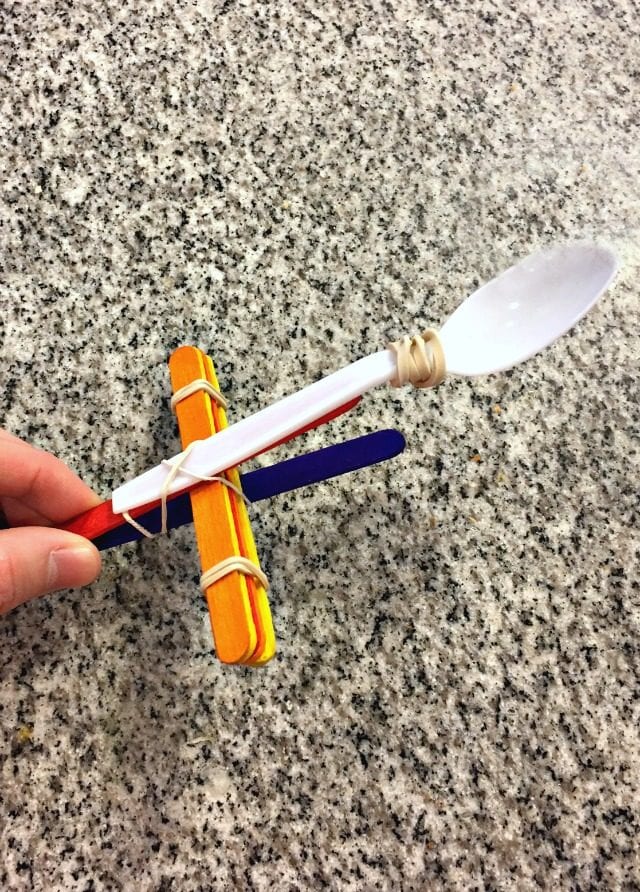 They’re really easy to make but the kiddos will need some help from an adult so make sure you plan extra time for that.

We used puff balls for footballs. Once they made their field goal kickers, they paired up and took turns flicking their popsicle stick kickers. One kid would make a field goal putting their hands together in ‘L’ shapes while the other kid “kicked,” then they would switch. This was a winning activity for sure! 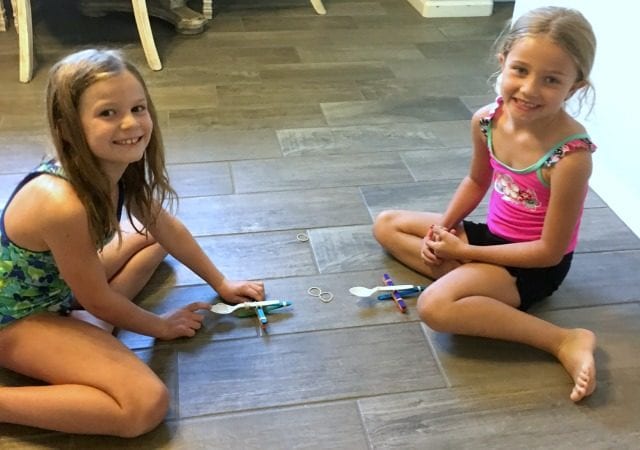 Another fun game we played during the week was “Coach Says.” This is just like Simon Says, but with a sports theme. I would have kids take turns being coach while I needed a minute or two to set up the next activity.

There’s no doubt that kids absolutely love games, and what better way to teach them a little about different sports, than with these super fun sports-themed activities?! 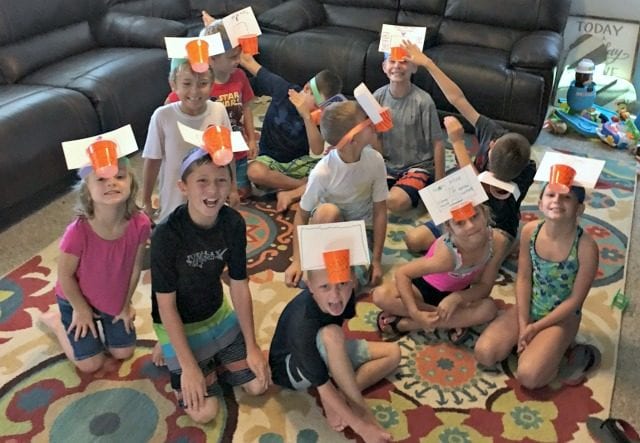 Check out our other themed-week ideas!