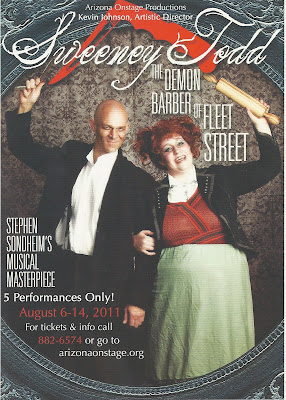 Well we are now in full swing rehearsals for Sweeney Todd! Daniel and I are both having a blast. He has been really lucky over the past three years to have performed in a string of quality shows, with decent to leading roles. I have been lucky as well, getting lots of working choreographing, but virtually no performing. It is very nice to be in a show with professionals! At one rehearsal I looked around and thought, “What is wrong right now? What feels off?” And the answer was- Everyone is really talented! So great to be a part of a talented, professional cast!
So far things are going great. I started out as choreographer (which is mostly just movement/staging, as there is very little actual dance in the show), and I’ve since been promoted to the title of Associate Director. The Director is a really sweet guy who is a good friend of ours now, and he said after realizing how much I was helping to form the show, he wanted to offer me that title. It will be rightly deserved, too, because he is a little (okay a lot) scatterbrained, so I’m doing a lot of the logistical work, organizing rehearsal schedules and making sure all the bit parts are cast, etc, in addition to a ton of artistic work with the ensemble and leads as well.
Here is the back of the ad cards that are going out: 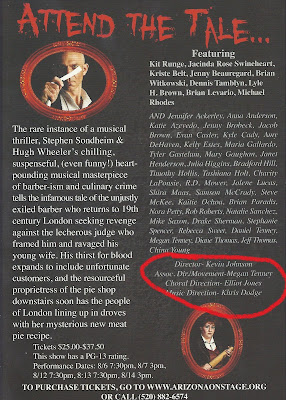 I circled in red the part where I’m credited. Both of our names are above there, as well, as part of the ensemble.

The show is going to be amazing; I’m really excited. I’m basically eating, sleeping, and breathing Sweeney Todd right now, and I couldn’t be happier about that! The cast is made of up THE best performers in Tucson, and it’s bringing together a lot of people who knew about each other but hadn’t worked together yet, so now we’re like one big happy family! Right?!

And on top of the fun we’re having, it’s a paid show! We are each getting paid to be in the ensemble, and I have yet to get my contract, but I will get paid as the associate director as well. It will probably even cover all the gas we’re using to get to and from rehearsals!

In other news, we have 8 DAYS UNTIL MAINE! I’m really excited to go, but of course disappointed in my weight loss efforts. More about that in a different post, but let me briefly say that at this point, I think the best thing I could possibly do is go running each of those 8 days (or otherwise work out for about an hour a day), and drink water, water, water!