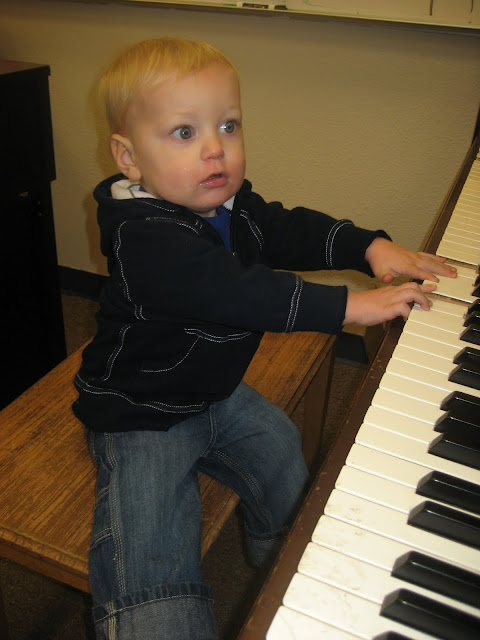 It seems like our little guy has done a lot of growing up lately, and I just wanted to document some of the things he can do now and what he’s been up to!

In most areas, Carter is very advanced. When I read a long list of things that babies should be able to do at 12, 15, 18, and 21 months, he could do everything on all the lists through 18 months, and many of the things on the 21 months list (this was at least a month ago, and he is 16 months now). The one area he is behind in is oral language! So far the only word we’ve gotten out of him is “woof” as in “what does the doggie say?” He does not even say “mama” or “dada” regularly, though he does say “mamamamama” at times, and I think sometimes he is referring to me. Anyway, I’m sure he will begin talking soon, as he babbles a LOT!

However, his receptive language skills are fabulous! He can point to things in books including dogs, cats, and all kinds of animals, babies, cars, etc. He can touch on command his nose, eyes, ears, hair, teeth, feet, hands, tummy, belly button, diaper, and bum-bum. He knows when he has dirtied a diaper and will do a hand motion to let me know. He knows people and will go to them when asked, including Mommy, Daddy, Gramma, Grandpa, and Aunt Mallory, for starters. He waves goodbye and also does the sign for “all done” when he’s finished eating. He can follow complex commands such as “go to your room, get a book, and bring it back to me.” He learns new words quickly, and usually only has to be told once what something is before he will refer to it on command.

His newest language-related skill is being able to nod “yes” and shake his head “no” appropriately. He’s been able to do both actions for awhile now, but he just recently started nodding yes when he means yes, and shaking his head no when he means no.

He LOVES to give hugs and “loves,” especially to babies. If he sees a baby, he has to go give him or her a hug. He will usually give hugs and kisses to Mommy and Daddy on command, and if he’s going down for a nap or bedtime, he will hug everyone in the room!

Carter loves to play, and his favorite toys at the moment are trains! He got several for Christmas and loves to play with them. He also loves his tools and “fixing” things. He loves to put things together, and he is always entertained when he has two objects that fit together somehow, such as the straps on his booster seat and changing table.

He walks and runs all over the place and is just beginning to learn how to dress and undress himself. His favorite animals are dogs, and he likes to look out the window to see if our neighbor’s dog is outside. He also loves to play the drums, and he gets to play around with a real drum set when we take him up to Daniel’s classroom. He seems to really enjoy music, as he also loves to play around on the piano and dance to records at home (yes, records).

Carter also loves stroller rides and car rides. He loves to visit Gramma’s house and play with all his toys there. He definitely favors his Mommy at home, but when we go to Gramma’s house, he wants to be with Gramma all the time!

Carter has a sweet tooth, so we are doing our best to keep that under control and limit what he gets each day (harder at Gramma’s house!). In general he is a good eater and will eat most things that are put in front of him (he just prefers the chocolate!).

Speaking of teeth, he has his bottom two, as well as one more on the top (to the side of the two front teeth) that has just come through. We’re expecting the top two any day!

Carter is about 24 pounds and 32 inches tall, which puts him just a little on the smaller side (he is so lean- no baby fat on this guy!). Our ward took him in the nursery when he was just 13 months, so he goes there regularly now for the second and third hours of church. Apparently the other kids love him because he’s the littlest, and the ones who have a hard time saying “Carter” call him “Pardner!”

Overall, we couldn’t be more pleased with our special little guy, and we love to see how he changes from day to day. It seems like he’s growing up so fast, and we are treasuring every moment that we get to have him.

Carter, we love you!

The rest of the house

You forgot a few skills- Carter can recognize many Beatles songs and he can identify John, Paul, George and Ringo. :) He also recognizes “Hark the Herald Angels Sing” and does the head motion that the Peanuts characters do. :)