An Ode to OOB

I grew up in Maine, and we lived in Old Orchard Beach until I was 9. It wasn’t until I moved away that I realized how much I loved that little beach town, and how much I would miss it! We went back for a visit in July, and it had been three years since the last time I visited. Too long! I already wish I was back there again.

If you missed reading about our trip out, you might want to read part 1 of our epic road trip. This post will continue on with the story!

We arrived in Old Orchard Beach at 10pm on July 3rd. We had been driving most of the day, and the kids were asleep in their seats. It was dark and rainy as we drove through the streets I hadn’t seen in over 3 years.

The whole time we were in Maine, I kept saying, “This is my childhood!” I said it about places, foods, activities. I was so thrilled to be back home and showing my husband and kids where I grew up. 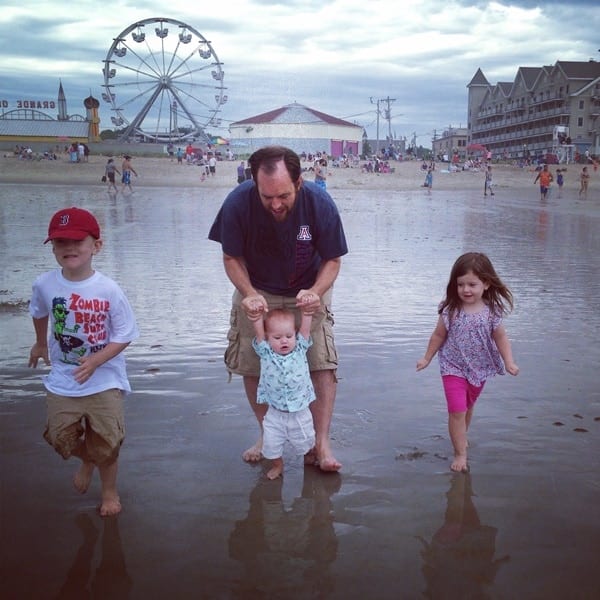 What’s so special about OOB? Well I think we all probably have a soft spot for the place where we grew up, but besides that, it’s a pretty cool town. In the summer, at least! It’s definitely a seasonal kind of place. While everyone flocks to Arizona in the winter, everyone seems to be in Old Orchard during the warmer months! We were happy to be out of the Phoenix heat and on the beach.

Also, my family has a little history with OOB. My mom’s parents met downtown, where my grandfather ran the ferris wheel, and my grandmother sold tickets. My parents also met there, while my mom was working at a bike rental shop and my dad worked at a restaurant. And wouldn’t you know, Daniel and I met there too, 10 years ago! It’s definitely our special place.

My parents rented a beach house for two weeks, for this trip, but we got to Maine a few days early. That first night we stayed at a motel a little further away from the beach, as everything close was booked up or probably very expensive. The next morning was July 4th, and Harrison and I got up early and left to get some donuts for breakfast.

I knew that the elementary school I went to for Kindergarten, 1st, and 2nd grade, St. Mary’s, had been torn down years ago. In 3rd grade the school consolidated with two other elementary schools in the area, and we moved to a new building, and then later St. Mary’s was torn down and a Dunkin Donuts built in its place. That was the Dunkin Donuts I went to that morning, and as I drove over the cracks in the pavement to get to the drive thru, I remembered how that was where my parents would drop me and my brother off in the mornings. After getting our donuts, something caught my eye, and I quickly pulled into a parking spot. 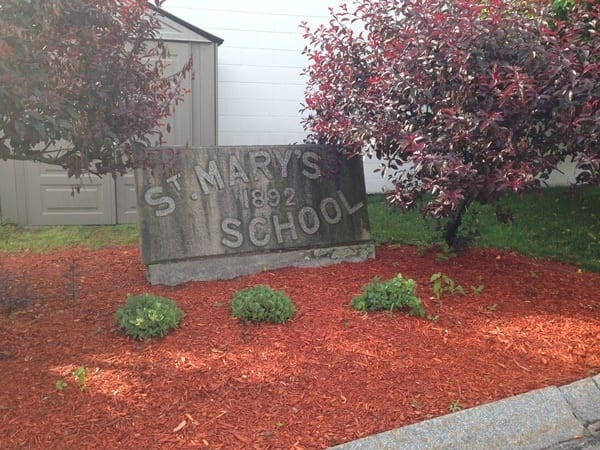 I don’t know how long this memorial has been there, but it completely warmed my heart to see it. Even though it’s not there any more, that WAS where my school was, and that WAS where I spent a good chunk of my childhood, and clearly I’m not the only one who wants to remember it.

After a donut breakfast, and a quick nap for Harry… 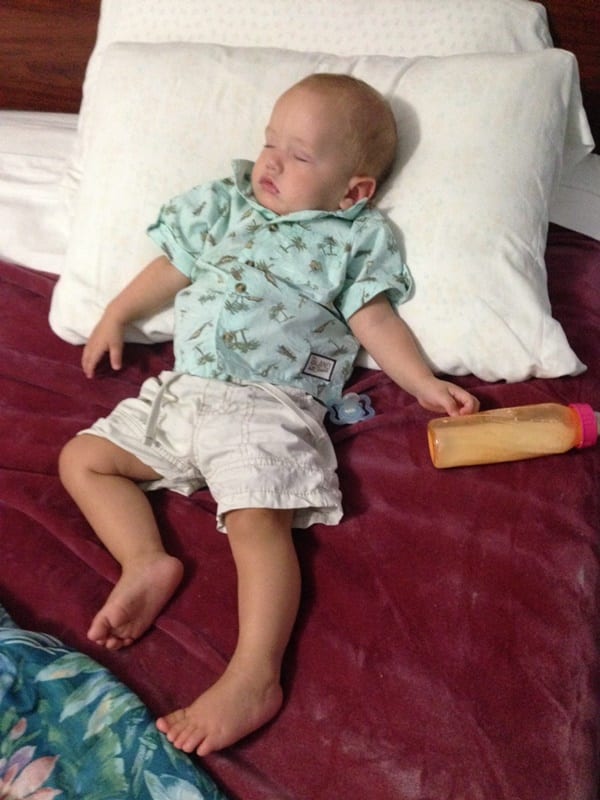 Traveling can be tiring!

…we drove back to OOB, parked, and fed the meter for a couple of hours. 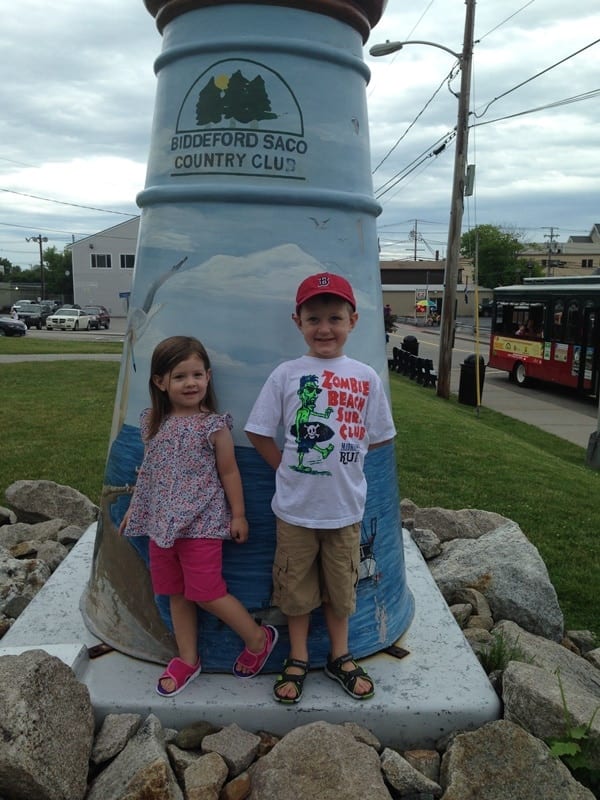 Old Orchard has a downtown area with lots of shops (oh the shopping!) and places to eat (oh the food!), as well as a pier and an arcade/amusement park. And the beach is just steps away.

Carter got his toes dipped in the Atlantic when he was just 5 weeks old. We took Vanessa there when she was 5 months. It took Harrison a whole year before he got to visit the East coast, but we eventually got him in that cold water! 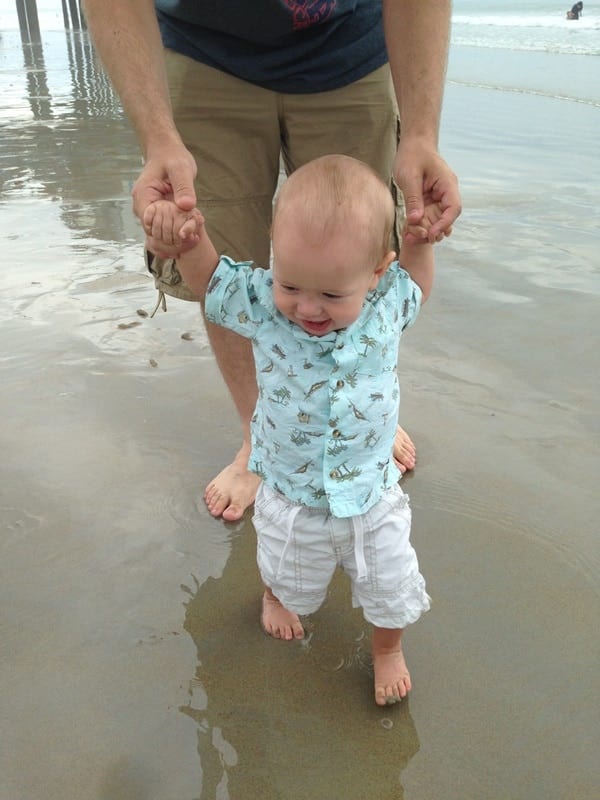 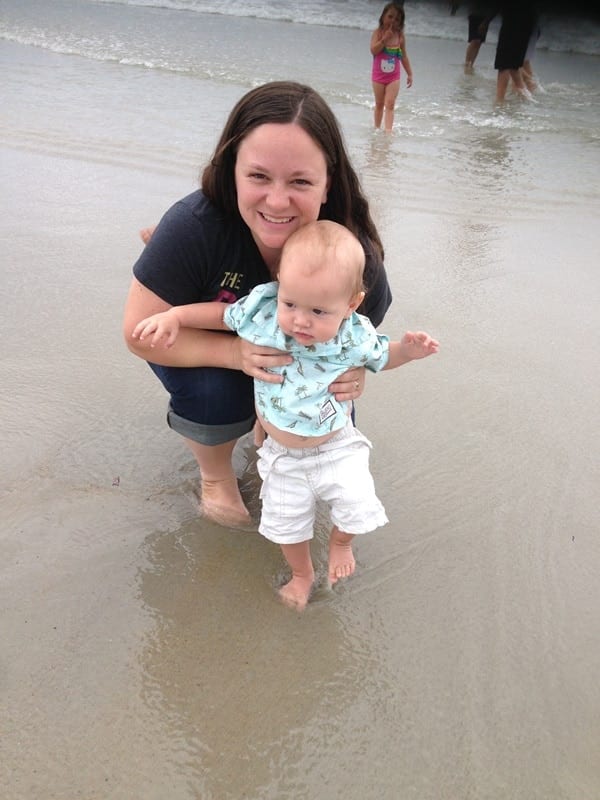 We took the kids down on the beach, and they immediately took to running around and playing in the sand and water. The beach is truly the ultimate playground for kids. Or the ultimate sandbox I guess! You don’t have to tell them what to do- they just know!

We weren’t planning on getting wet that day, but the best laid plans… 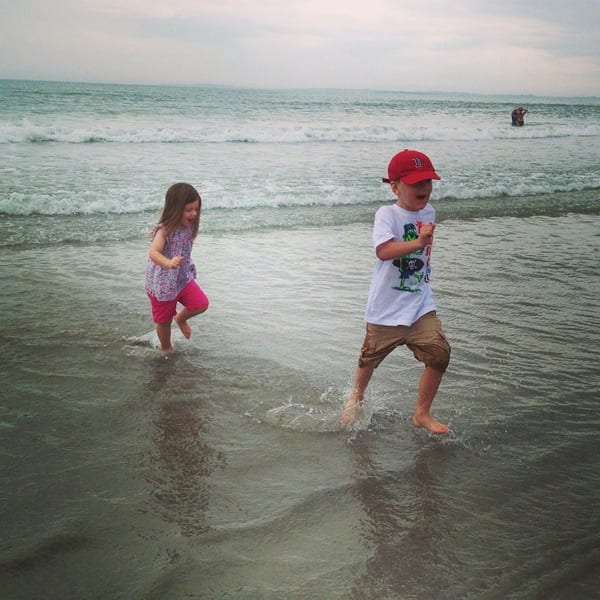 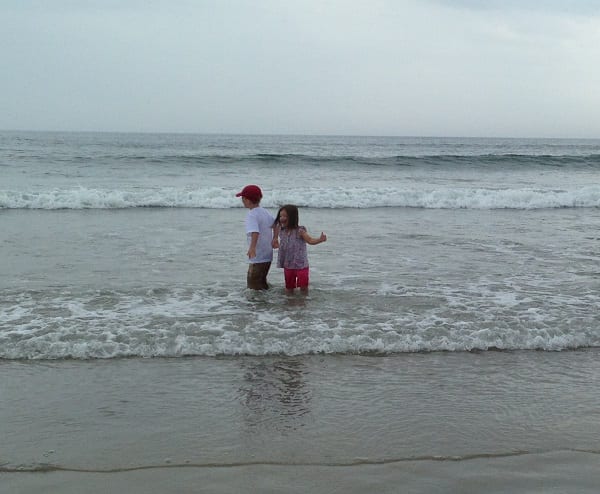 After some fun on the beach, we cleaned off our feet and went to get some Pier Fries. 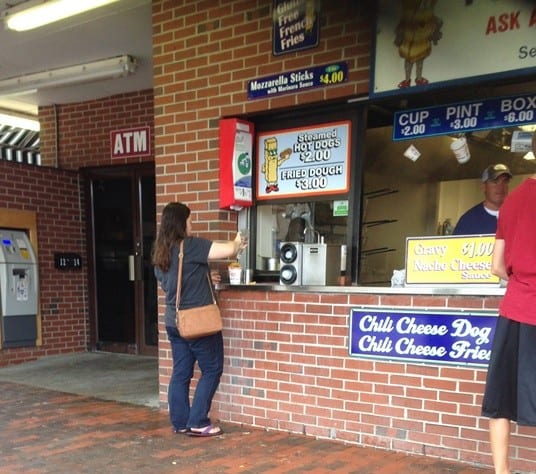 I know I’ve mentioned Pier Fries on here before (a quick search brought up 9-10 posts…). They were one of the major reasons why I wanted to visit Maine! They can only truly be enjoyed when doused with vinegar and coated with salt! 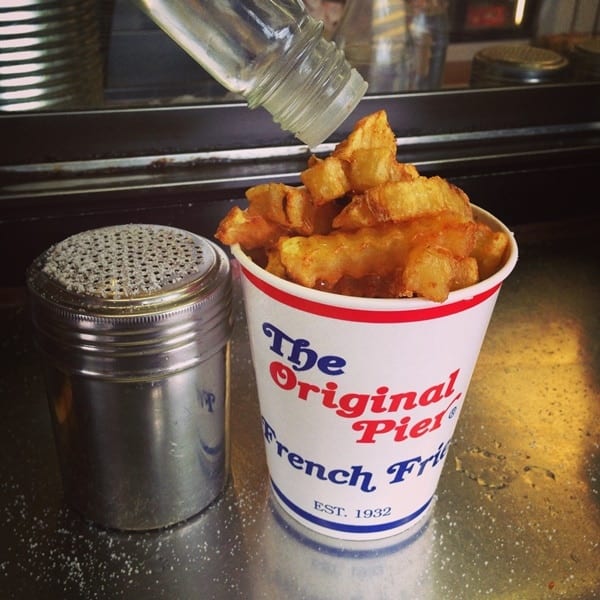 During our time in Maine I can’t even tell you how many pints of fries I enjoyed, but it was definitely in the double digits. If you ever visit Old Orchard Beach, don’t leave without getting some Pier Fries (with tons of vinegar and salt). 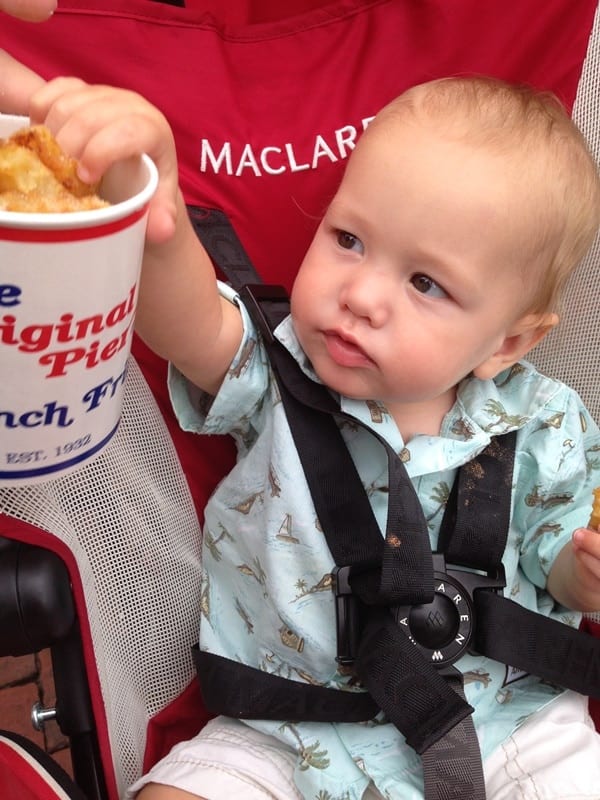 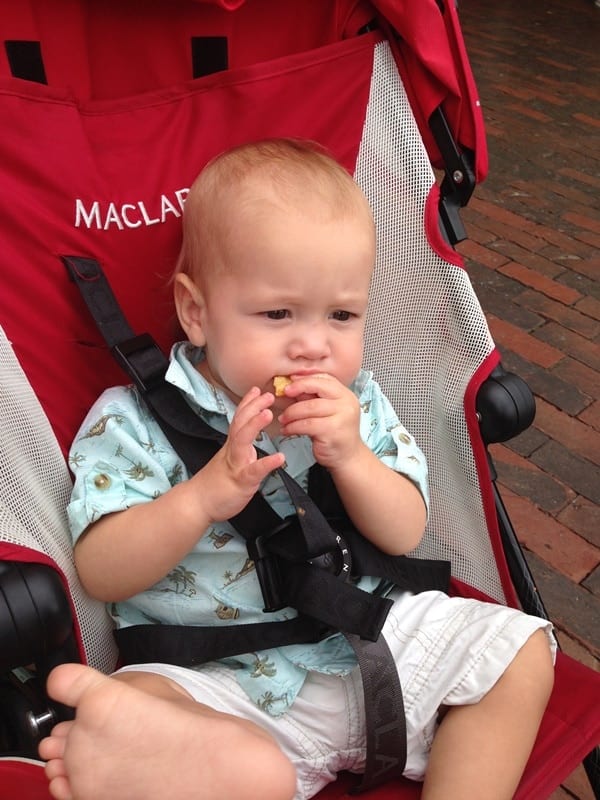 We got some seafood from another place to add to our fries and sat on a bench to enjoy our lunch. 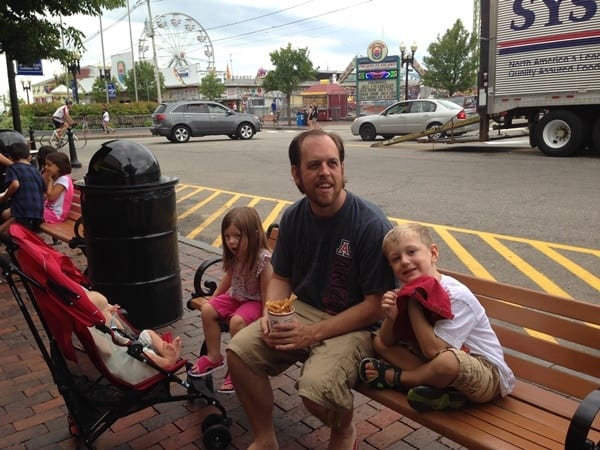 We were right by the train tracks, and before we were finished, a train went by! Carter and Vanessa jumped up to watch it and wave at the conductor, who waved back. 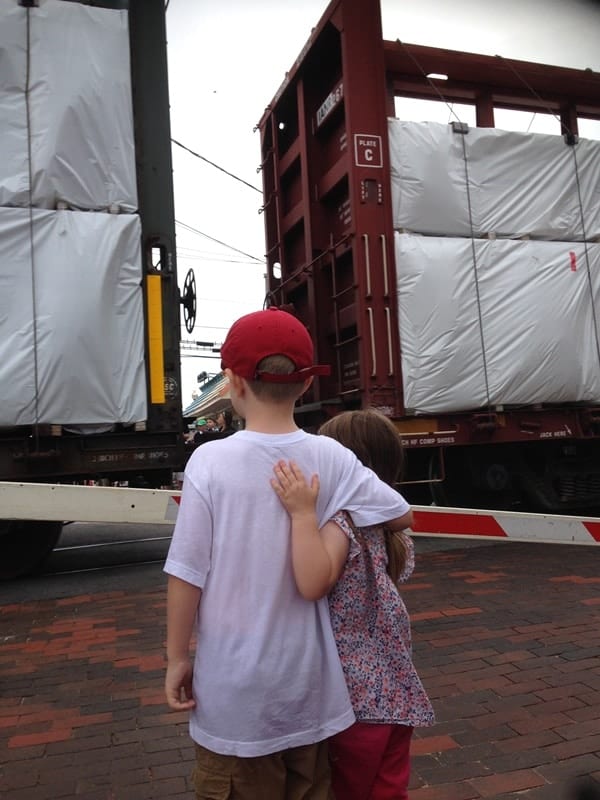 It was starting to drizzle as we finished lunch, so we got back in the car and drove a few towns over, to South Portland, where we got an early check-in to our hotel for that night (which just happened to be the Marriott where I had my senior prom in high school). We were spending one night there, and the following afternoon was when we could move into our beach house where we’d be for the rest of our time in Maine. My parents and sister flew in on that same day and met us at the hotel later that night.

We were on the VIP floor, thanks to my Dad’s Marriott loyalty, but the concierge room was closed for the weekend. Luckily there were some drinks in the fridge so we brought them back to our room.

Daniel, Carter, and Vanessa took naps while I took Harrison over to the Maine Mall to walk around for a bit. Not too much has changed there since I moved away, but we had fun walking around, looking in some of the stores, and enjoying a snack at the food court.

Later, we all piled back in the van and headed over to Biddeford to get some dinner at the best pizza place in the entire world, Pizza By Alex. Don’t even try to argue with me on this one. It’s the best. 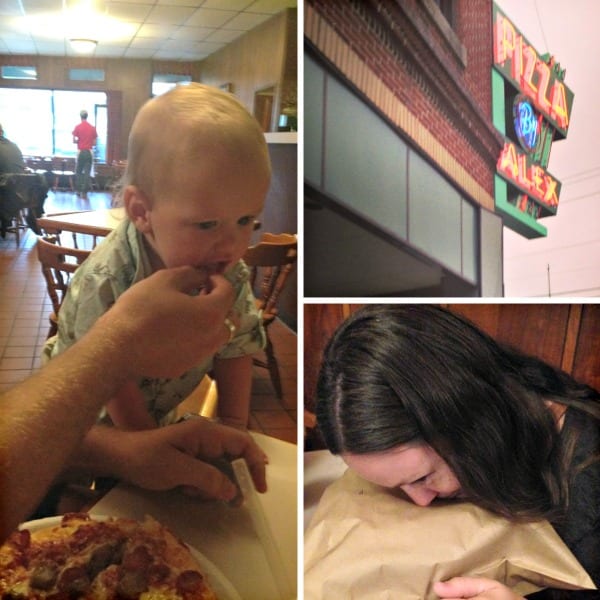 Again, Pizza By Alex is something Carter and Vanessa were introduced to when they were little, but it was Harrison’s first taste!

After gorging ourselves on pizza, we headed back to our hotel for the night. The next morning we ate breakfast at the hotel’s restaurant, then later drove all the way down to Wells to eat lunch at Mike’s Clam Shack, and then we finally checked into our beach house in the afternoon! 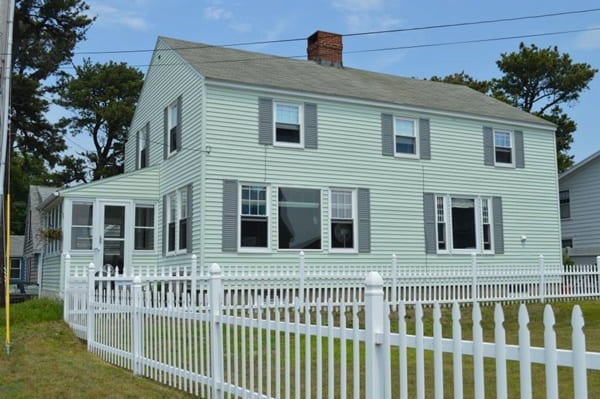 The beach house was located on Pine Point about 2 miles north of downtown Old Orchard Beach, and the door to the house was about 100 yards away from the sand. 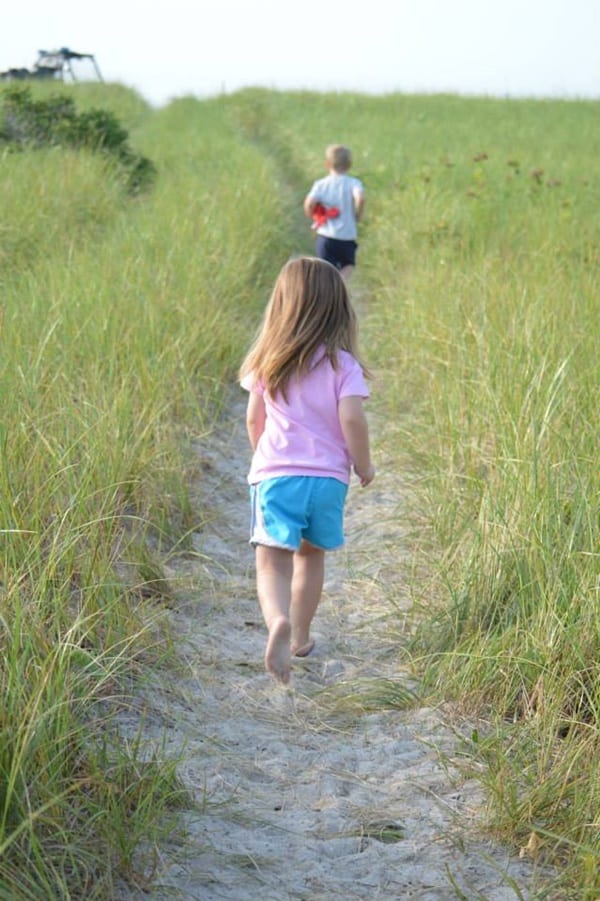 It was on a little side street with beach access, and though it was the second house from the beach, the first house was set back from the road, so we had a gorgeous view of the ocean from the living room and most of the bedrooms upstairs. 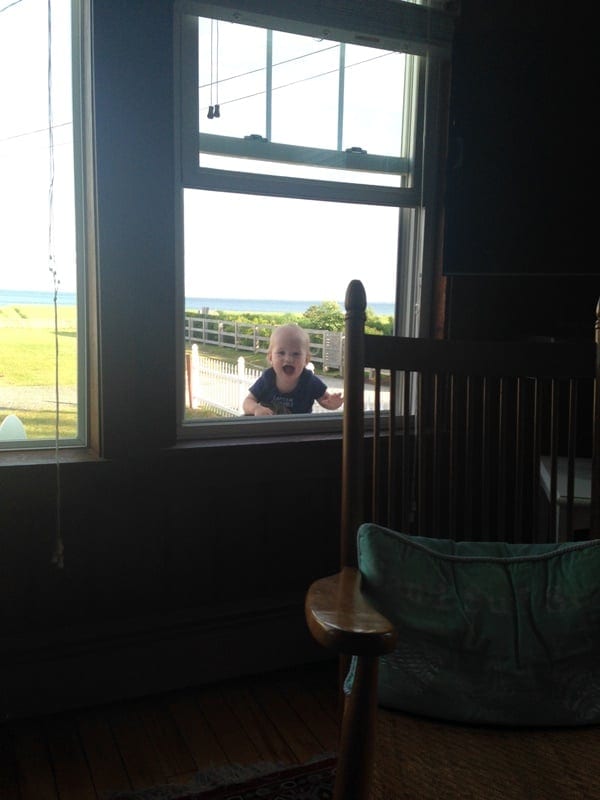 It was a fantastic place to stay! Not only was it steps from the beach and a short drive from downtown, it was such a cool old house. Carter and Vanessa shared a room with two twin beds, and Harry was in with us, which made for many early mornings! 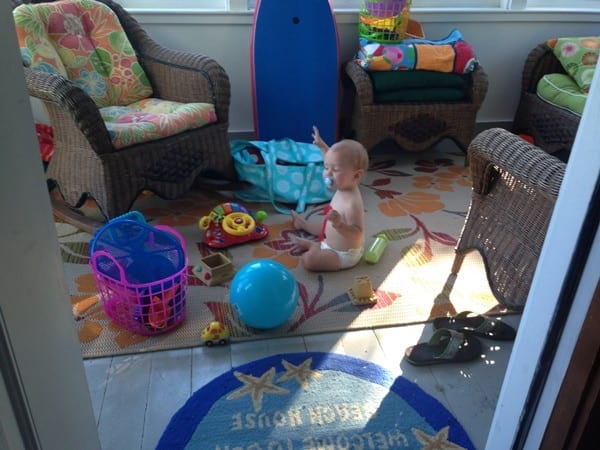 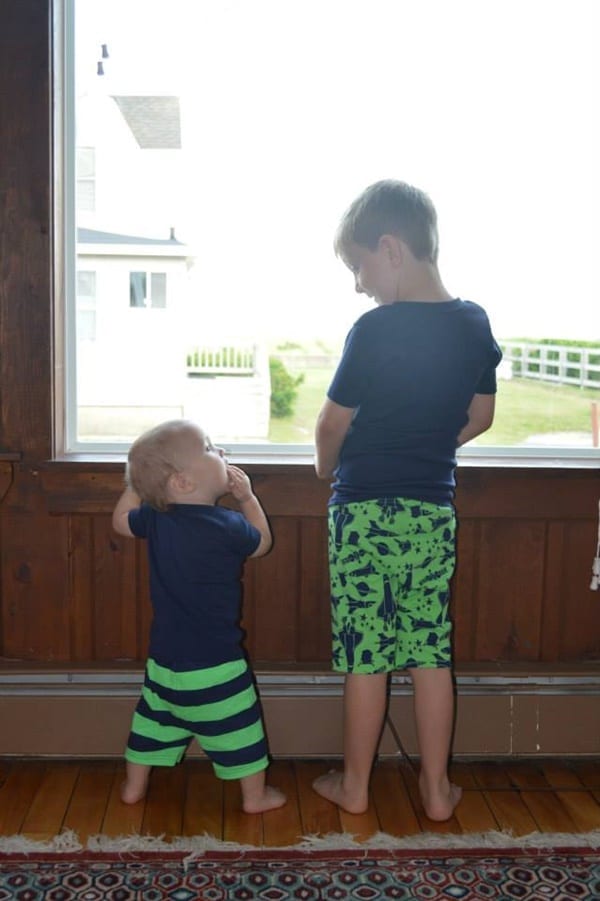 Most of the days we spent in Maine were beautiful, and we spent either the morning or the afternoon on the beach, depending on the tides. The kids were absolutely in heaven, and actually the adults were too! 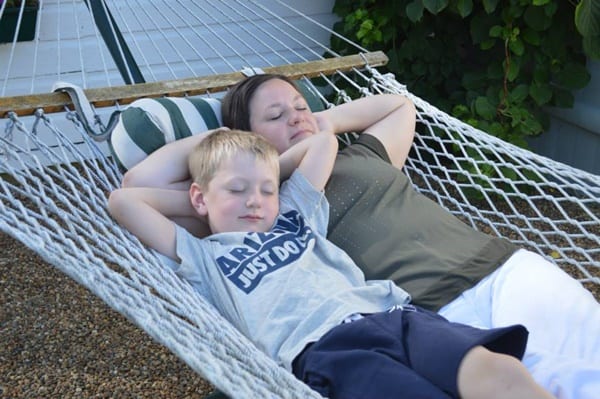 We had lots of visits from relatives and friends, so the house was often full of people, and those people were usually eating pizza (Alex’s, of course), or sandwiches from Amato’s! 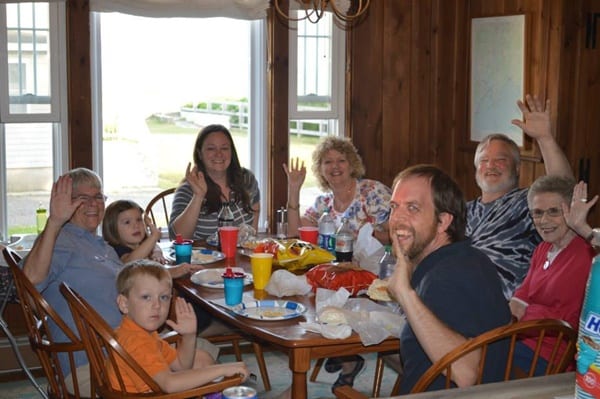 When we weren’t on the beach, we were enjoying our favorite local restaurants and shops! And several evenings were spent downtown in OOB, getting our fill of Pier Fries and candy and riding the rides! 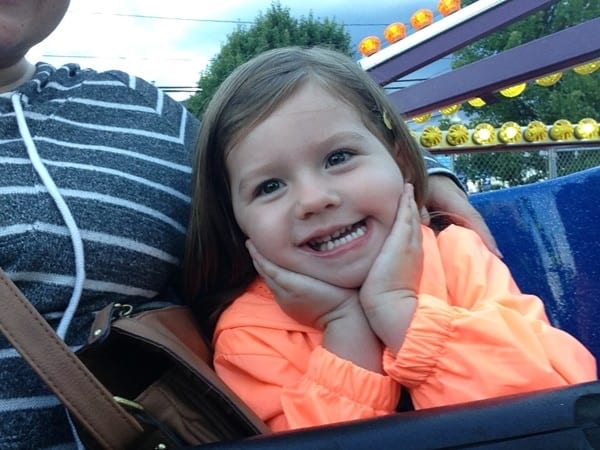 No Kid Hungry at Denny’s

I grew up right outside Pine Point and now live 20 minutes away! Best beach ever. And you writing about pier fries makes me want some, I guess I know where I’m going this weekend! OOB is amazing in the summer, but sadly empty in the winter, it’s amazing how different it is. I’m glad you had a great trip, and I always love when people write about my home :)

Aah, so jealous that you can get pier fries whenever you want (you know, during part of the year)! I can’t wait to go back and visit again soon!

[…] Coney Island really did remind me of home- Old Orchard Beach, where I grew up, is very similar, with the beach there right next to an amusement […]