Today I’m sharing part two of our recent trip to NYC. If you missed part one, check it out here: NYC Trip: Brooklyn Bridge and The Met.

Day #3 was my last day in the city. My flight left from JFK at 8pm that night. Again we slept in until 10am! Our room was very dark, and we were so tired, that it wasn’t too surprising. But we were headed for Coney Island, and I wanted to have as much time there as we could.

A few years back, we directed a show called See Rock City & Other Destinations, a musical that takes place in 5 different iconic places in the US, and one of them is Coney Island. Ever since doing that show, I’ve wanted to visit. One of the songs from the show is “Q Train to Coney Island” so of course we had to take the Q train! 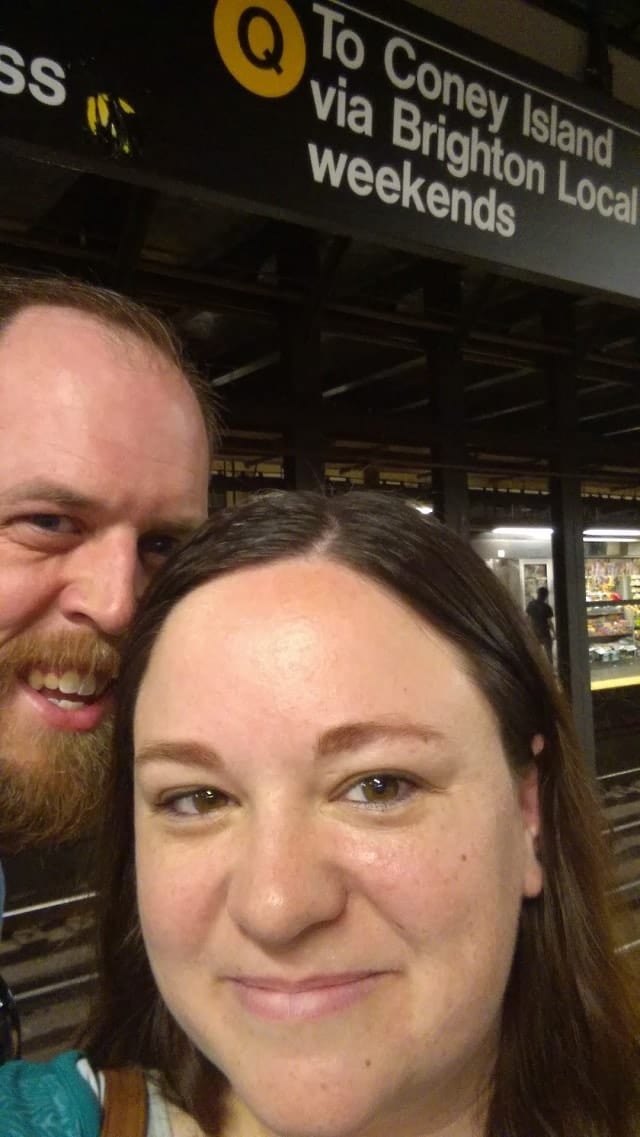 It was a good 45 minute ride, but as we approached the Coney Island station, we could look out the subway windows and see the rides! I couldn’t wait to jump off and go play!

The first thing we did, of course, was to get a hotdog! I ate a hotdog at Coney Island- bucket list, check! 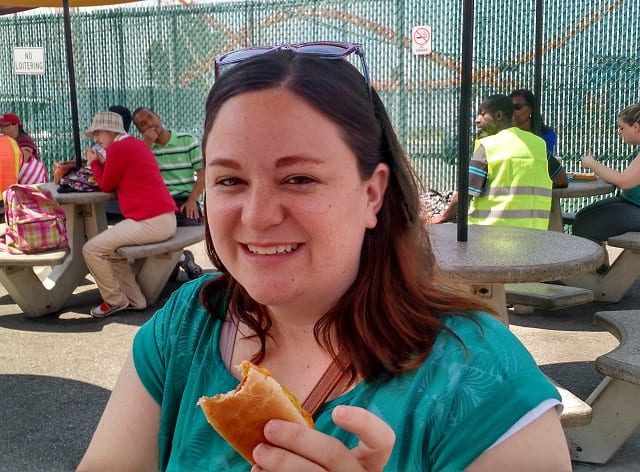 After we ate, we walked down to the boardwalk, passing lots of great murals on the way. 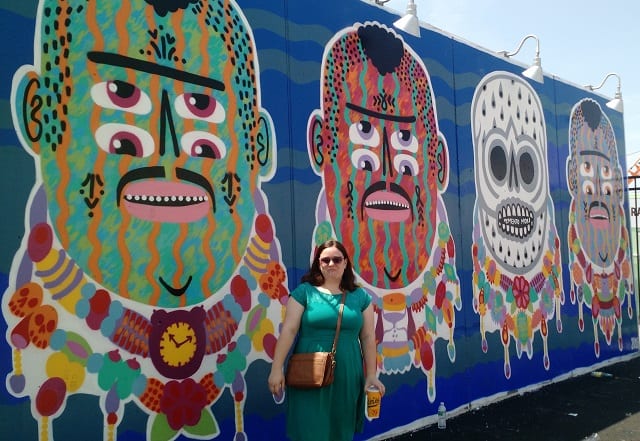 And the Coney Island guy at the entrance to one of the parks. 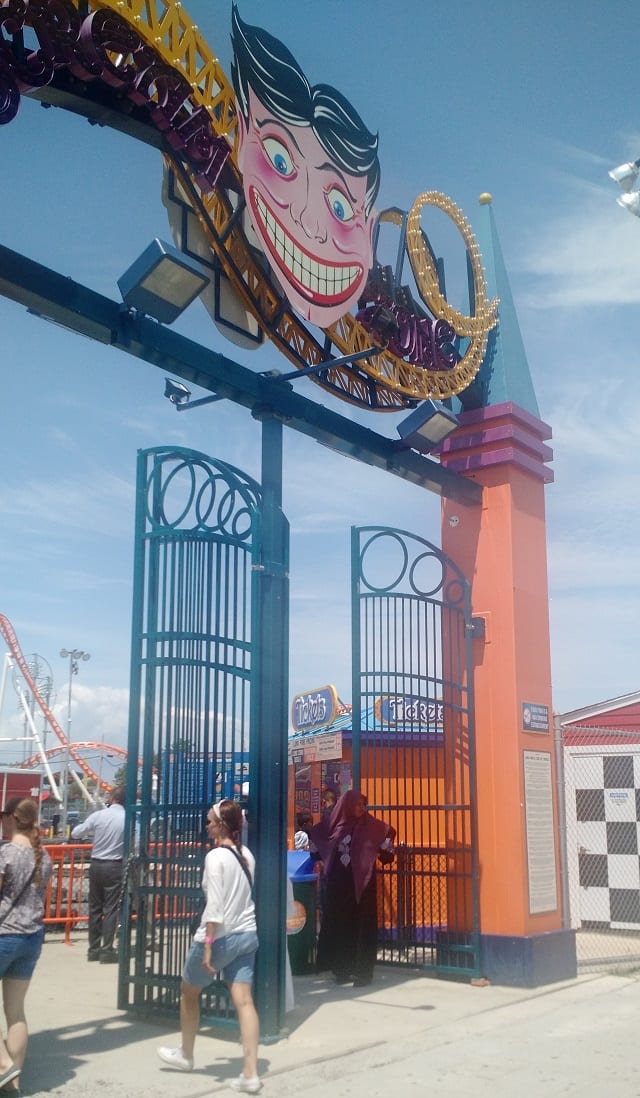 We hit the boardwalk and turned right to go see the old, but newly refurbished parachute jump ride. It doesn’t operate anymore, but it’s been declared an official landmark, so it’s not going anywhere! 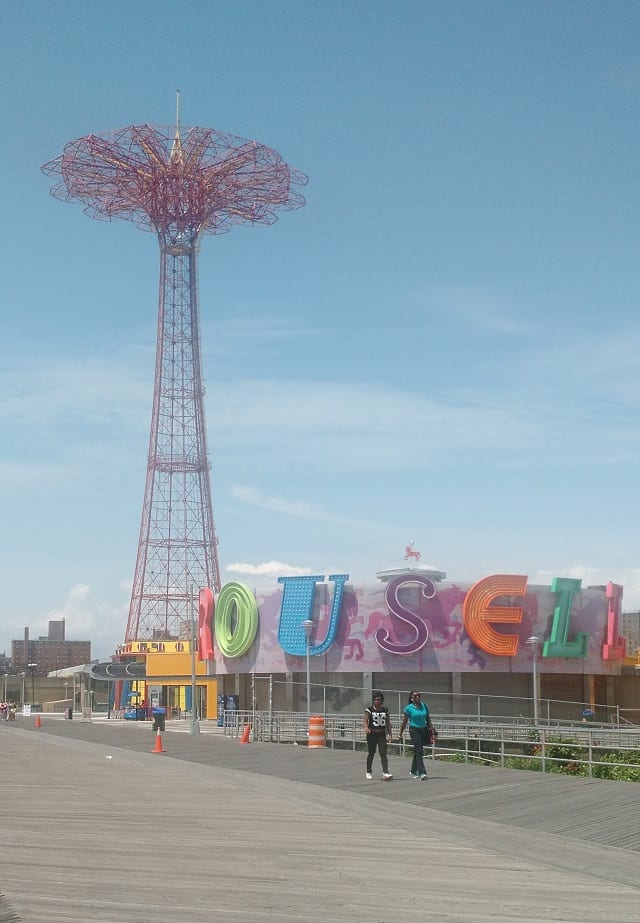 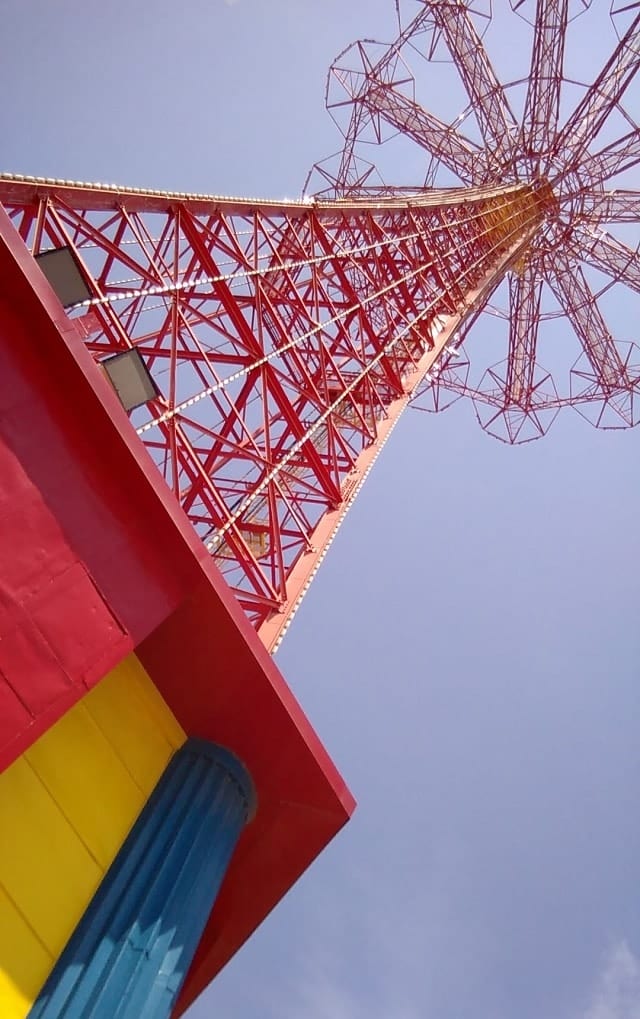 These kinds of things fascinate me. I love to think about how this ride used to run 50 years ago, and people stood where I stood, and who were they, and what was going on in their lives? I’m totally captivated by places and things like this that have such a history to them. Remnants of a time gone by that still stand to tell the story. Fascinating. 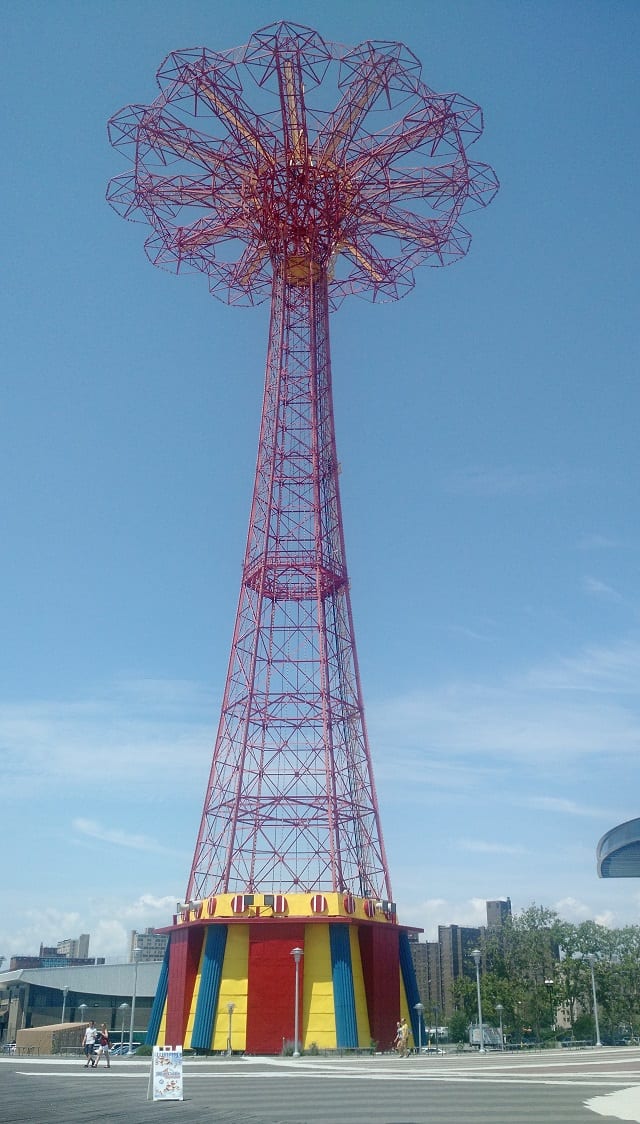 After admiring the parachute jump, we headed down to the shore to put our feet in the sand and the ocean. Now that we live in Arizona, I miss the beach terribly. This summer I got so homesick that I cried, just looking at a map of southern Maine. We visited last summer, and we will probably visit next summer, and we’ve been away for longer than that, but somehow it hit me hard this summer. 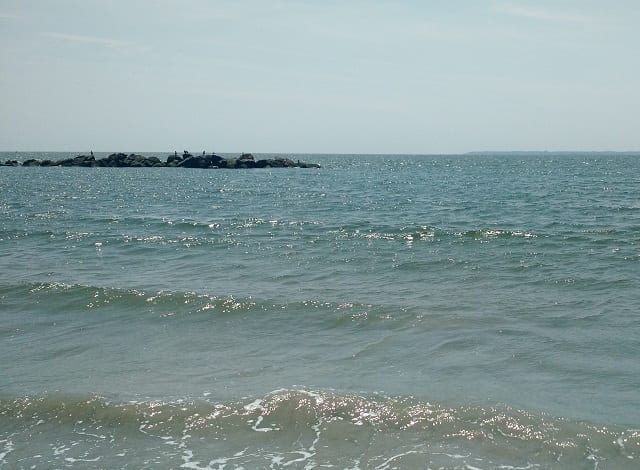 So even though we didn’t go to Maine, standing there with my feet in the Atlantic Ocean, just for a few minutes, felt like therapy to my soul. I felt like I was home. 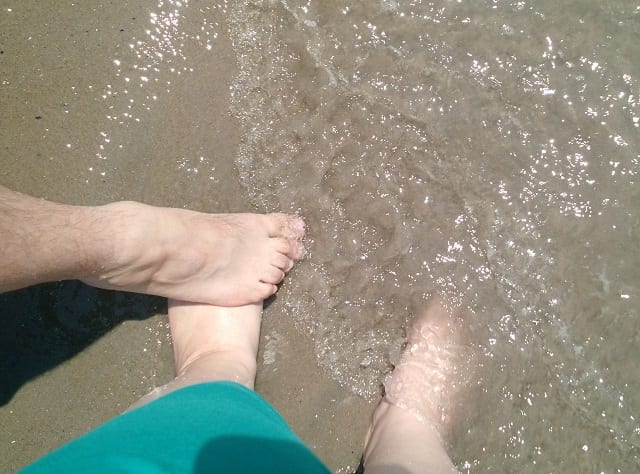 And then Daniel “foot bombed” my photo. And then he asked me if I liked his “point.” Yes, darling, very nice.

And Coney Island really did remind me of home- Old Orchard Beach, where I grew up, is very similar, with the beach there right next to an amusement park. 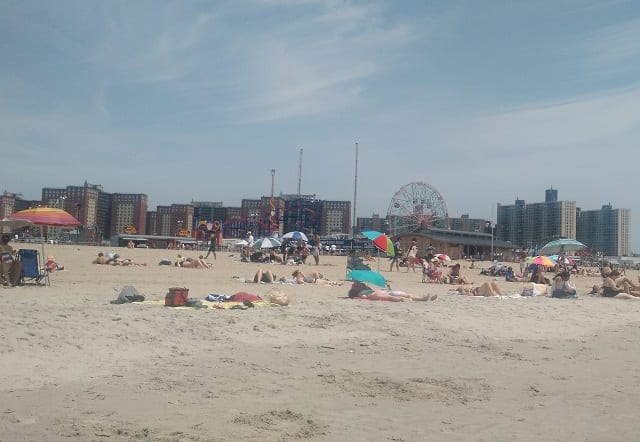 I didn’t want to pull my feet out of the ocean, but we were on a schedule, and we wanted to ride some rides! Coney Island actually has two amusement parks- Luna Park and Deno’s Wonder Wheel Park. Luna kind of wraps around, with Deno’s in the middle of it. Make sure you buy tickets for the right park!

In the musical we directed, there’s a whole song about the “dark ride” at Coney Island, so we knew we wanted to do that! There have been several different dark rides over the years, and there is one still there, the Spook-a-Rama, and it has pieces in it from some of the other scary rides that have closed. 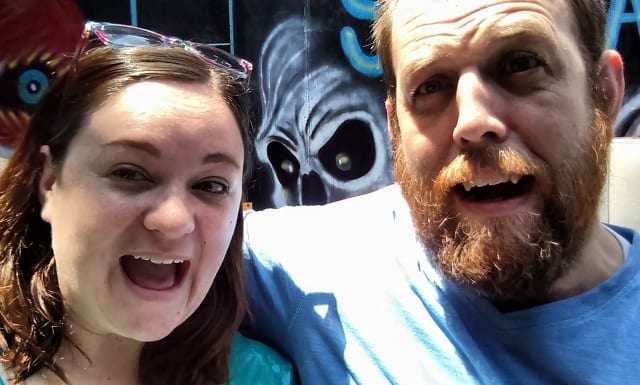 I’m not going to lie, it was actually a little scary! Fun, though.

Then we had to hit up Deno’s Wonder Wheel, also mentioned in a song from the show. Since we were both absolutely terrified on the swinging cars on Mickey’s “Fun” Wheel last time we visited California Adventure, we opted for a non-swinging car, which doesn’t swing but actually goes higher than the swinging cars! 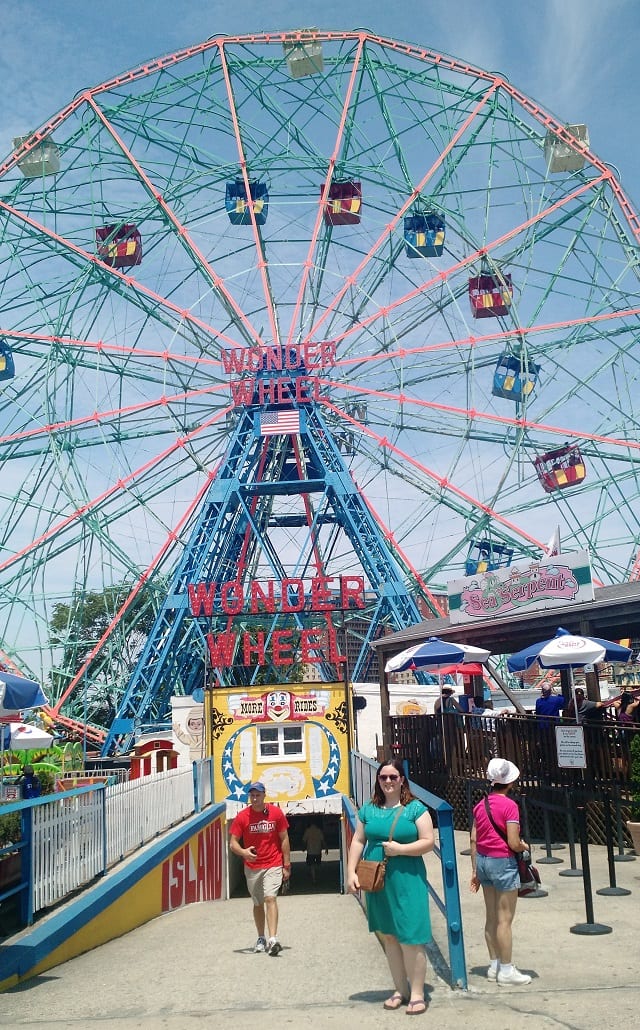 It was still pretty scary. The cars have two benches, and we sat together in the front with no one in the back, so the whole thing was tipped forward the whole time. Definitely saw my death on the way down. 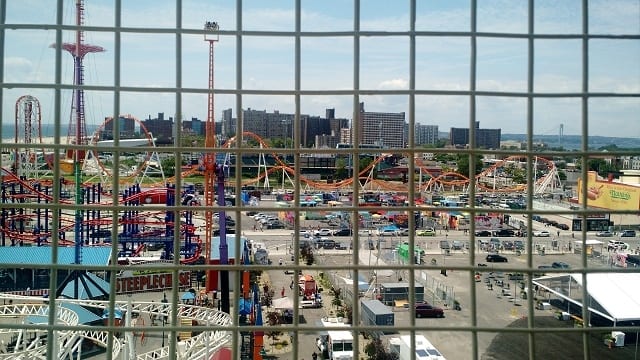 After the Wonder Wheel, we had one more ride ticket, so I rode the Thunderbolt to use it up. As soon as the ride started up, they started playing “Forget You,” which is my jam, so I very much enjoyed my ride!

Then it was time to start heading back to the subway to get back into Manhattan, but first we needed a snack. We wanted to get zeppoles (another musical reference), but they were out, so instead we got some very very very delicious fried Oreos! 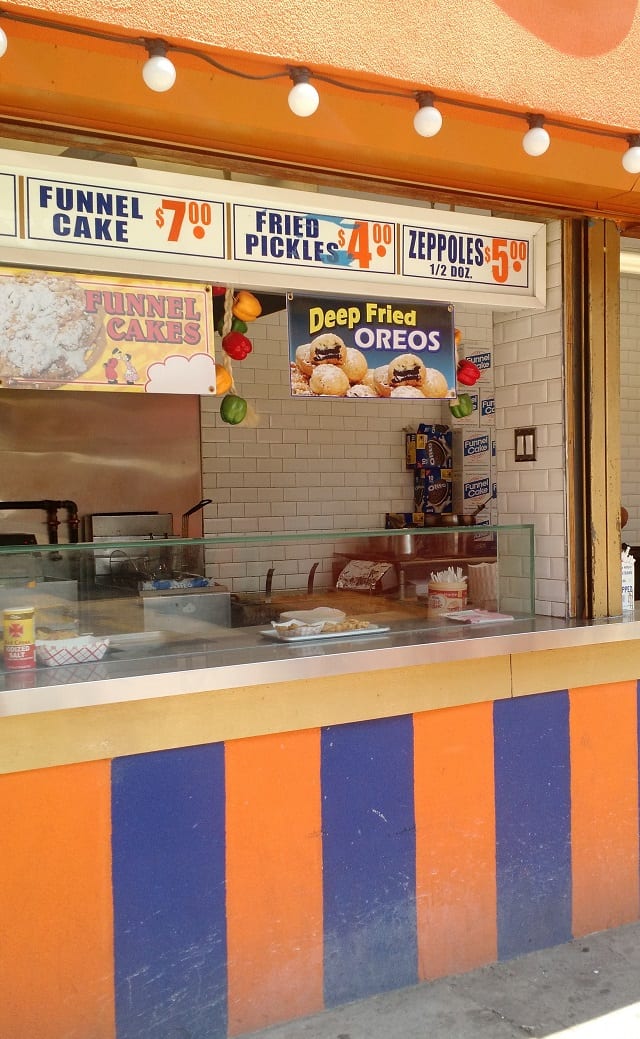 While I was waiting for our order, Daniel made some friends. He was sitting alone at the picnic table behind me, when a ton of people came out of nowhere and surrounded him! 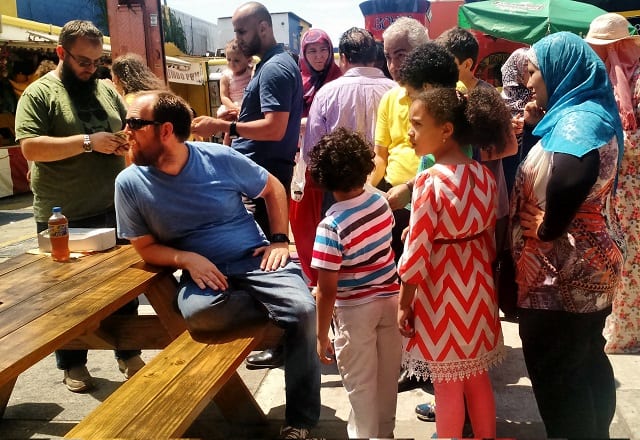 They were handing out pre-purchased tickets, I think, and they tried to give Daniel one! 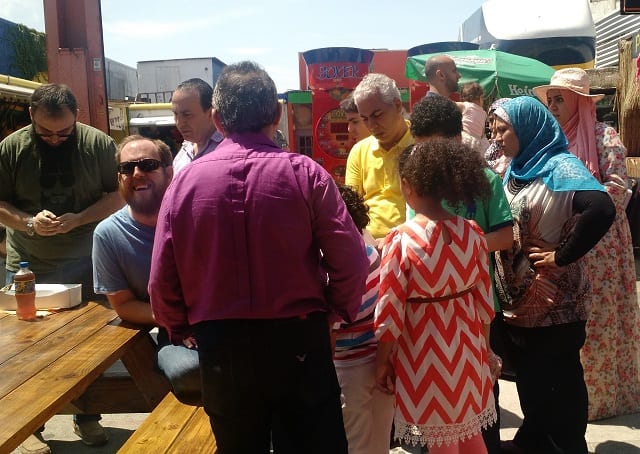 I loved the time we spent at Coney Island. I think a lot of it was the fact that it reminded me of my hometown, but I loved it either way. I definitely want to visit again sometime.

By mid-afternoon we were heading back uptown, because I had a little blogging event that I had been invited to, and after that it was time for me to get to the airport to fly home. Daniel stayed four more days to see some more shows, and I went home to be with the kiddos. He got to see lots of great shows, including the Broadway hit “Hamilton,” which he won a lottery ticket to see! 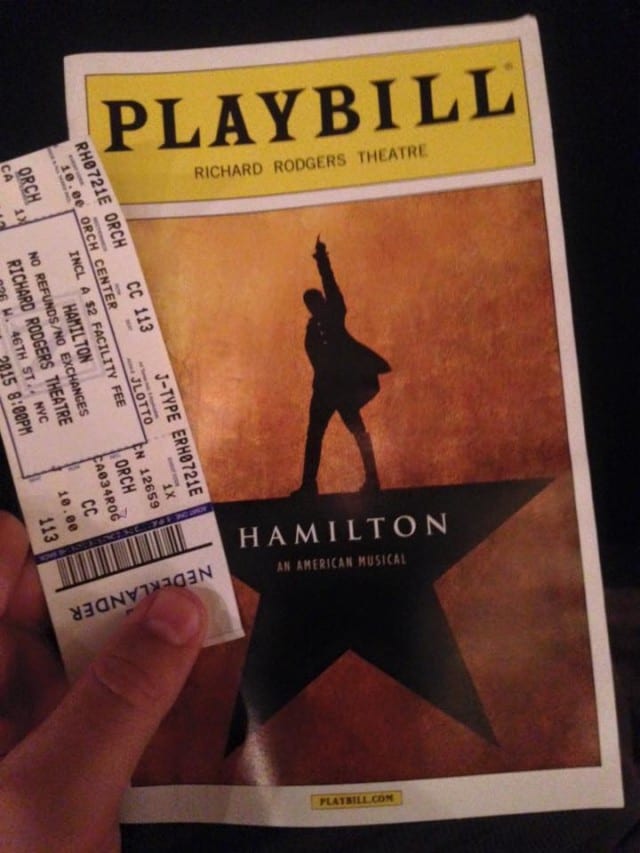 I’m glad I went along for the first part of the trip. It was really fun to do some things we haven’t done in NYC before, and I’m sure we’ll be back to visit again soon! 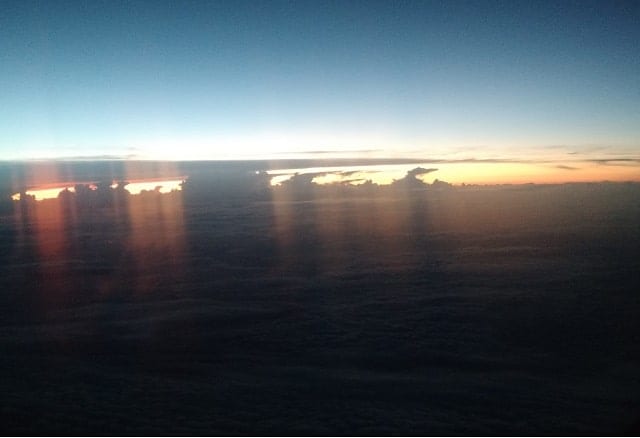 Sunset view from the plane window…it was prettier in real life!