My trip report for New Orleans was getting pretty long for just one post, so today I’m going to finish writing about the rest of my time in the Big Easy! If you missed it, check out part one of my trip to New Orleans. 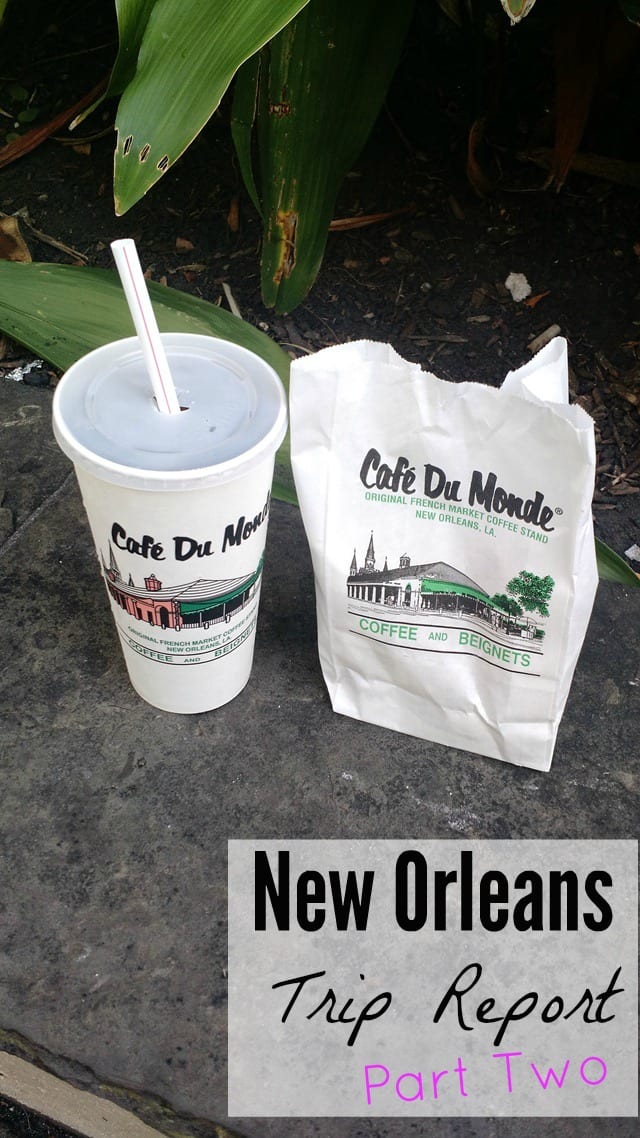 Tuesday morning I got up early (not easy to do- I was up late the night before and still having jet lag), and I walked up Royal Street and across to Jackson Square to get some of the famous beignets at Cafe Du Monde (see the picture above).

I guess I should have taken a picture of the beignets themselves, but it would have just looked like a bag full of powdered sugar since that’s pretty much what it was! The beignets themselves are like crispy donuts, and they were delicious! I walked by the water for a bit, but it was hard to eat and walk, so I ended up taking them back to my hotel room to enjoy, before heading back to the Musee Conti for the last few sessions of iRetreat.

I really enjoyed our first session of the day, which was roundtable discussions on various topics, suggested by attendees. I wish we had had time to switch around to different tables.

During the rest of the morning we learned about business plans, being on television, and heard from some kid bloggers, who gave me some good ideas for Carter (who wants to have his own YouTube channel).

Which meant that Tuesday was going to be my exploration day, so as soon as the conference ended, around noon, I was off to explore! I went back to my room to change and get ready, and then I headed out. 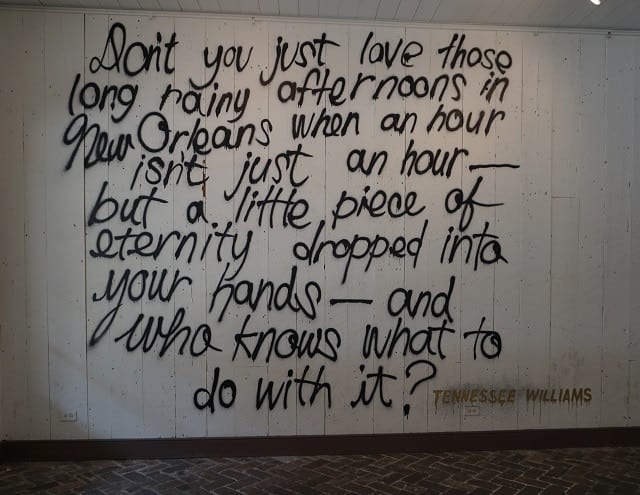 My priority for the afternoon was visiting some of the filming locations for American Horror Story: Coven. There’s an actual movie tour in New Orleans, but they weren’t running that day, so I was on my own!

I’m going to be writing a separate post about the locations I visited, so I’m going to mostly skip over those for now, but I’ll link to that post when it’s written. 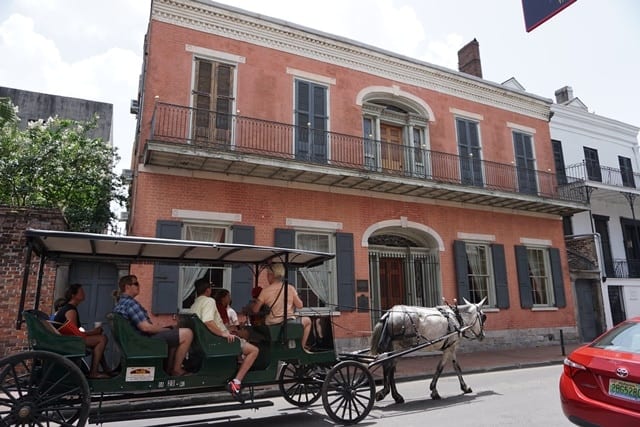 At 2pm I visited the Hermann-Grima House (above), for a tour of the house and grounds. I was visiting because the inside of the house was used for filming AHS, but it was also just a fascinating tour. The inside of the house has been preserved with some of the actual items from several hundred years ago, and it was very interesting to learn some of the details about how people lived back then. It was an hour well-spent.

After the tour I was hot and hungry, so I stopped back in my room for a break. I knew I wanted to take the streetcar to the Garden District, and I wanted to be back before dark, so soon I headed out again.

At this point I was super hungry, so I stopped into a restaurant/bar on Bourbon Street for a soda and slice of pizza before going to the streetcar stop on Canal Street. 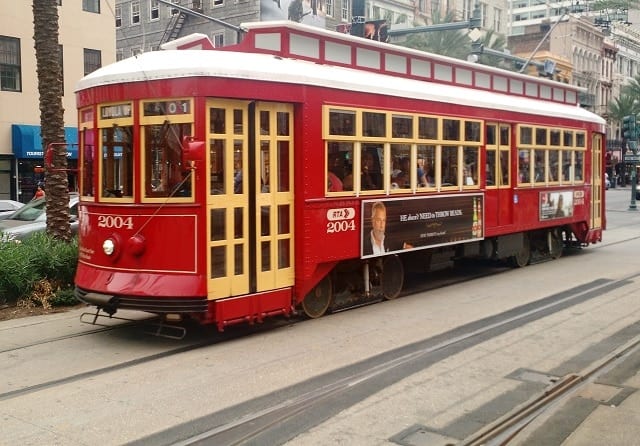 I was actually on the green car line, but I took a picture of this red car from the window. I thought I had read somewhere that the ride was 45 minutes, so I settled back, ready to enjoy a long ride. But it only ended up taking about 20 minutes! We had to switch to a bus at one point, because the streetcar track was under construction, and then the bus didn’t stop where I expected it to, so I had a little extra walking!

Finally I made it to my destination, the mansion used as the school in AHS: 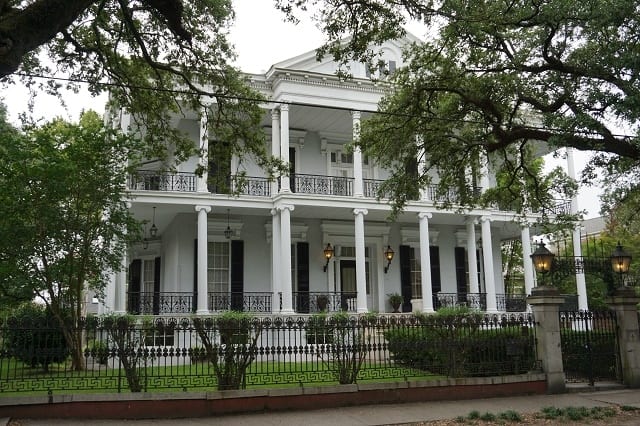 And I wasn’t alone! A mom and two sisters were there taking pictures, too. They didn’t know about the tour I had taken earlier, so I told them all about it and the other AHS places I visited.

After taking some photos, I walked on a bit and found Magazine Street, which had some restaurants and shops. I walked quite a ways and found a restaurant also used in filming and took some photos there. Then I grabbed a Jamba Juice and headed for the bus/streetcar stop to get back to the French Quarter.

When I got back, I was exhausted from my long day of walking and touring, so I took another break in my room (loved being able to go back and forth all day!). But I wasn’t finished yet!

I had considered taking a walking Ghost Tour of the city, but after such a long day I wasn’t up for two more hours on my feet. When I visit again, that’s definitely on my list of things to do.

Instead, since I hadn’t done much in the way of souvenir shopping, I went back down to Royal Street to check out the shops. 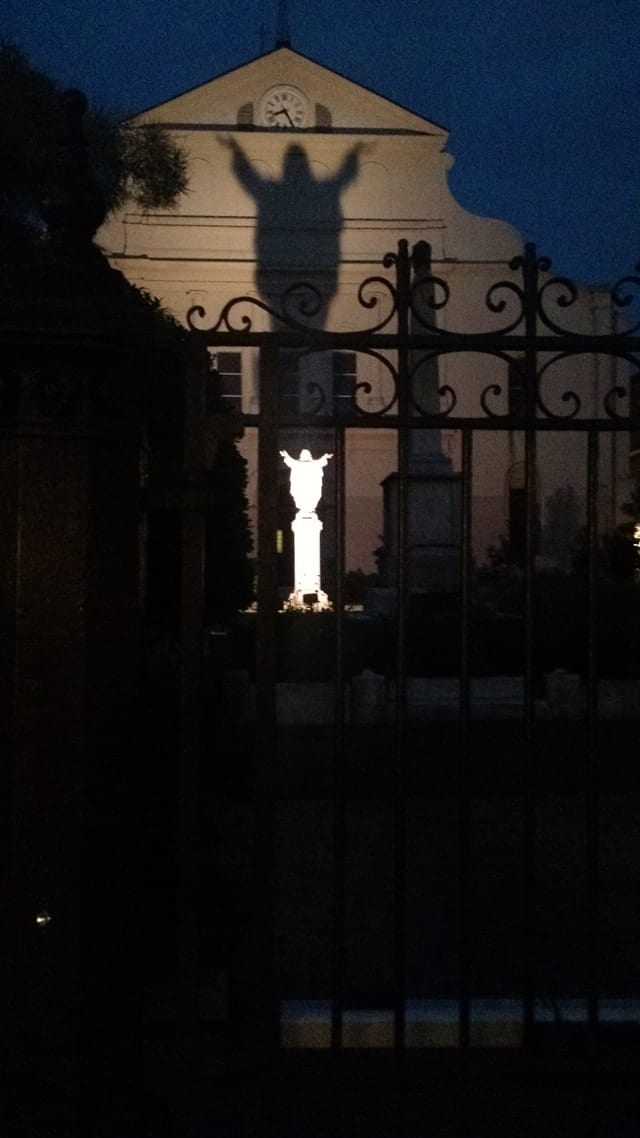 On my way, I had to stop and marvel at the statue of Jesus (and his shadow!) at the back of the St. Louis Cathedral.

I ended up getting some Gumbo and Jambalaya mix and seasoning for my husband, a streetcar Christmas tree ornament, and some chocolate-covered Oreos that were so very very good!

When I was ready to head back for the night, I stepped into a sandwich shop and got a pizza panini and slice of chocolate cake to go. I brought them back to my room and watched some TV while I ate my dinner, then spent my last night at the Hotel Mazarin.

Wednesday was my last day in NOLA, and I had already made plans for a swamp tour, so I got up, packed, and checked out. I stored my bags at the hotel, grabbed a bagel, and waited outside for the swamp tour bus to pick me up.

I decided on Cajun Adventures for my swamp tour. Other places do airboat tours, which sounded cool, but a quieter, more leisurely tour through the swamp is what I chose this time around. I put the airboat tour on my “to do next time” list.

Cajun Encounters was a 45-minute bus ride away from the French Quarter, and it was nice to see a little bit more of the city on the way. I dozed a little, and soon we were there! 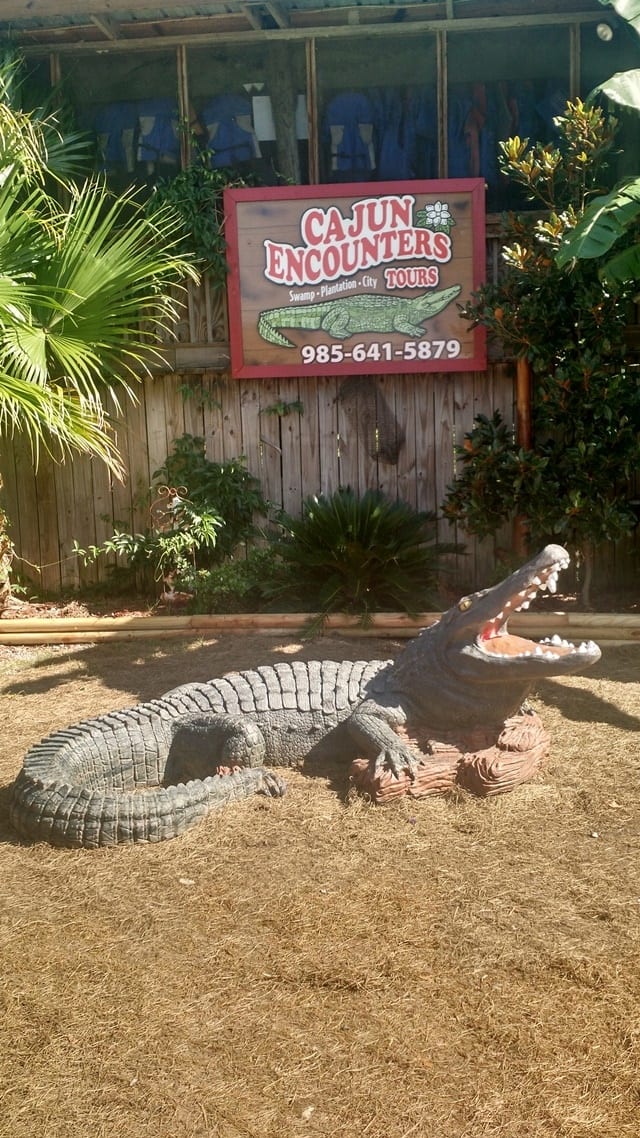 I had a great experience with Cajun Adventures. From the bus driver, to the ladies in the office, to our tour guide, everyone was friendly and helpful. And we saw lots of gators! 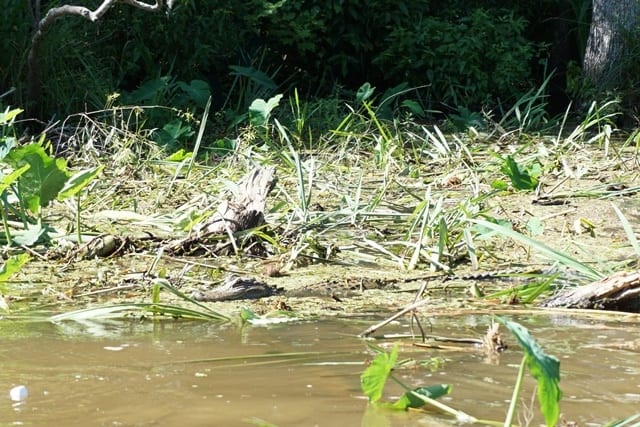 Wanna go for a swim?

The gators came right up to the boat and happily jumped for marshmallows! 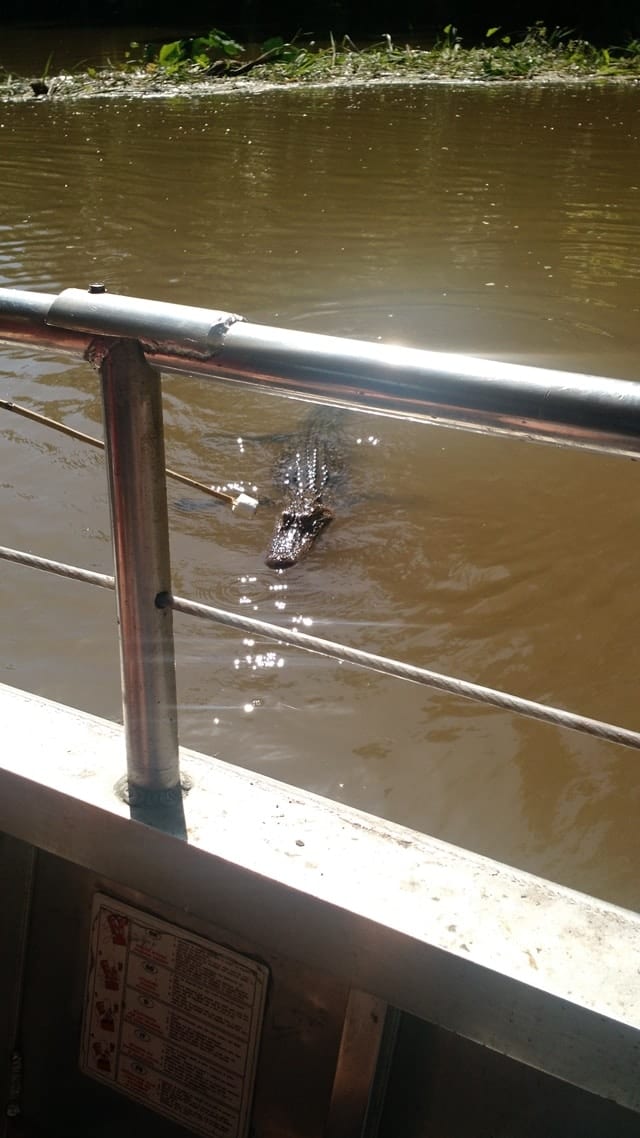 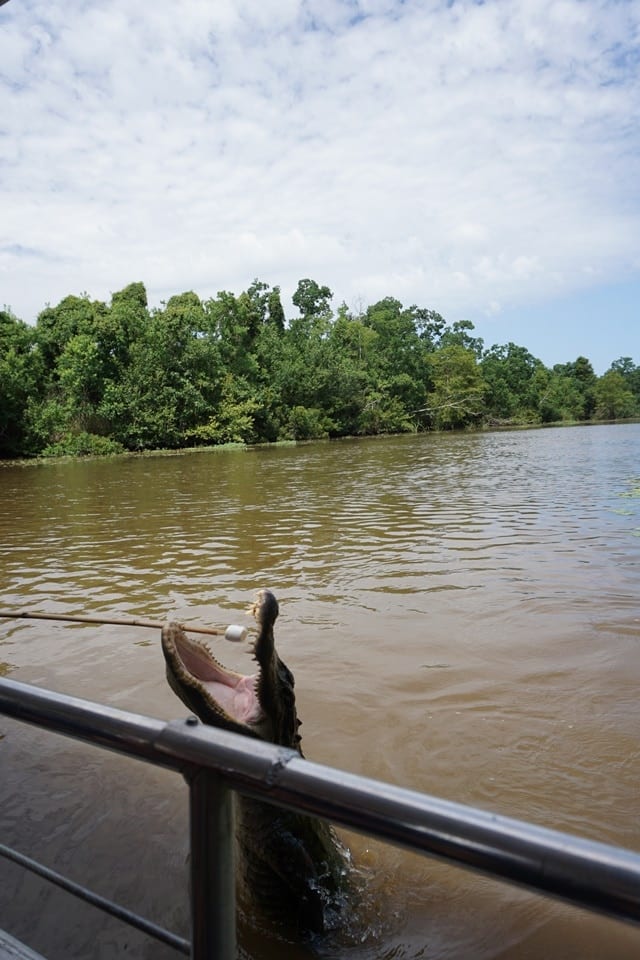 We also saw some wild pigs, and they also liked marshmallows! 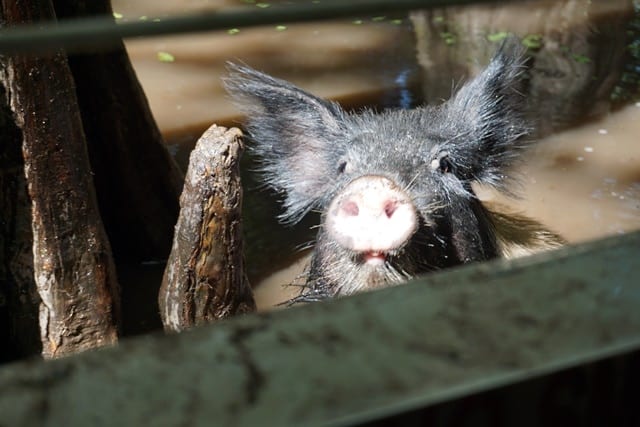 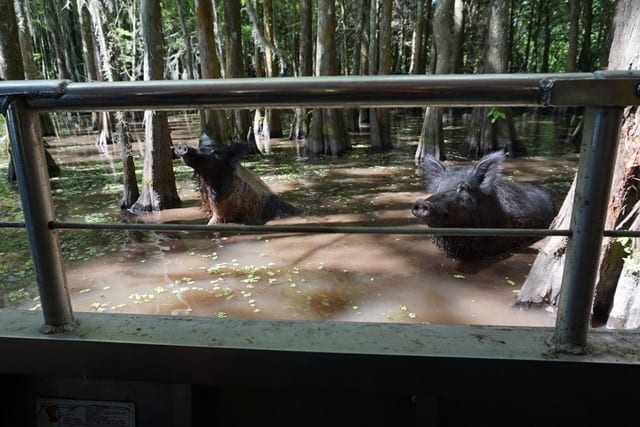 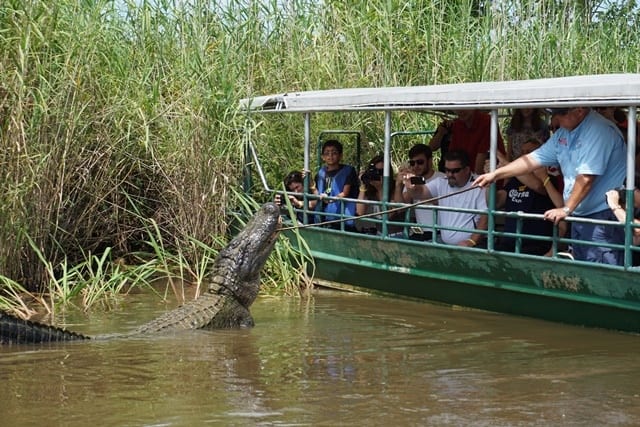 Seeing the swamps of New Orleans was definitely a bucket list item, and I’m so glad I got the chance to do it on my trip.

After the tour, I rushed back into the gift shop to buy a couple of “gator eggs” that I had seen, for Carter and Vanessa. They were similar to the toys that grow in water, except these gators actually hatch from their shell!

Our driver was willing to drop us off anywhere along one of the streets in the French Quarter, so I got off near the Hard Rock Cafe and met Asha and Nate there for our last meal in New Orleans. Our flight was delayed by an hour, so we didn’t have to rush.

The night before, I had seen a cute gator shirt for Harrison, but I hadn’t bought it because up to that point I hadn’t seen anything I thought the older kids would like. Since I bought them the gator eggs at the swamp, I rushed back and bought the shirt for Harrison (and one for me). I was glad I found something for everyone, and just in time!

Soon I was on a flight home, and soon after that I was home and dreaming of eating beignets in the French Quarter. I had so much fun in New Orleans, and I was thrilled to explore a city that was new to me. I definitely plan to return, next time with my husband, so I can have an adventure partner!

Until next time, NOLA! 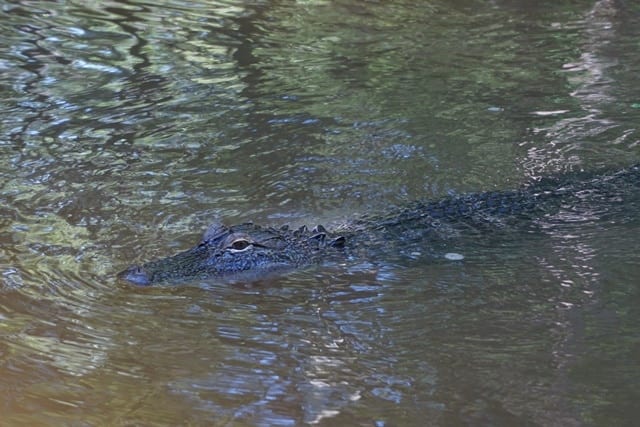 […] up into two posts- one about iRetreat conference and exploring the French Quarter, and one about my swamp tour. Today, as part of Netflix’s #StreamTeam (for which I receive a free membership and some […]