Well it’s been a really fun couple of weeks!

I had asked Daniel awhile back to take off from work the Thursday before Mother’s Day, just because it was a good day for us to spend together in Tucson, and I didn’t think he was going to. But Wednesday night I left my tap class to find him waiting outside the studio with red roses! He also had Mother’s Day cards from him and Carter. I didn’t even know he was coming into Tucson to meet me. He took Thursday off from school, and we spent it together in Tucson while my parents watched the baby for most of the day. We went to a few furniture stores and decided on our sofa/loveseat set for our new house, and we also went to Home Depot and looked at carpeting and paint. Too many options, if you ask me! We had a delicious lunch at Red Robin, and then we went home in time for me to teach my dance class. It was a very fun little surprise- wish I had some pictures!

Then, on Mother’s Day, he got up early with Carter so I could sleep in, and then he made me breakfast in bed. It was very good.

This past Monday, I planned a fun FHE for us- or so I thought anyway. We’re in the middle of our Biggest Loser contest, so we walked up to the school to do some sports activities. The first activity was to run around the track and then to beat our time. Daniel did it in about a minute, forty seconds, but then he was too winded to go again! I managed to beat my time the second time around (by a second), although I didn’t think I’d even be close!

The hurdles were set up for track and field, which I noticed during my morning runs at the track, so I wanted Daniel to teach me how to jump them. He showed me how, and I tried a few times, running and jumping to the side of them, but I don’t think I would have cleared the real hurdle, so I didn’t try. I will, though, eventually.

My third event was going to be going back to his room and seeing if we could remember a hefty dance break from a show we were in (four years ago!), but I didn’t have the music. Daniel said he had a third event, but it wasn’t sports-related. He took me over to a random corner of the campus where some junk has been left and told me about how he wanted to do a show there. He’s really getting into some cool stuff with his show ideas, and I think he’s invented a new genre of theatre, which I named “experiential theatre.” Not experimental- experiential. Every show is an experience for the audience; they are not merely spectators. Good stuff is coming to St. David- stay tuned.

Then we went home and had our FHE treat- fruit and cheese kabobs! Here are some pictures of us enjoying our treats! 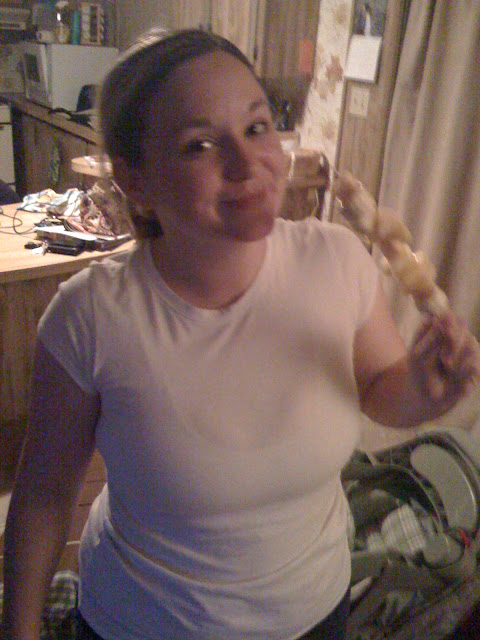 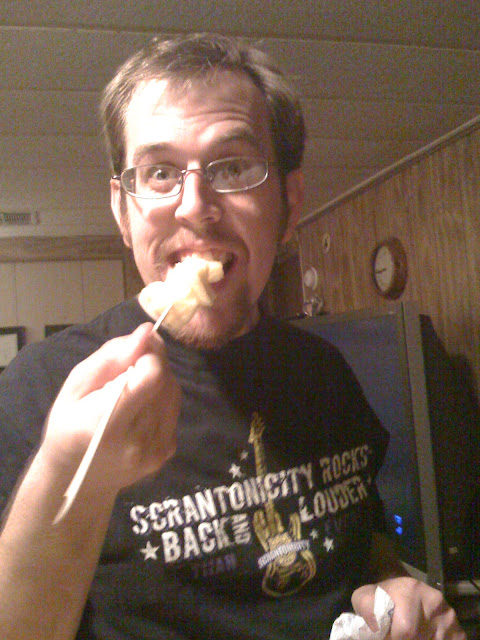 THEN, on Saturday, Daniel surprised me with a murder mystery birthday party. He spent all night Friday and all day Saturday getting everything set (leaving me home all day with Carter, wondering what he was up to!). Around 4pm, Chris showed up at my house with a packet of information for me and instructions to get ready to go to Tucson. The packet had a character for me to play, along with all the information I needed to know for the party. One of the documents was an invitation to Daniel’s character’s manor for a dinner party (the address was my parents’ house in Tucson).

So Chris and Carter and I drove up to Tucson, delivered more packets to Lindsay, Cynthia, and Alma, and then arrived at my parents’ house, one at a time. We were instructed to start playing our characters as soon as we knocked at the door. My mom was playing Daniel’s character’s personal assistant/housekeeper, and she welcomed the characters one by one. I was a business woman, Lindsay was a British woman (though we found out later that she was NOT who she said she was!), Chris was a guitar-toting free spirit, Alma was a politician, Cynthia was his southern wife, daughter of an eco-friendly gas mogul, and Shella was Daniel’s character’s cousin. Rob showed up later as a “police detective.” We all talked and shared pertinent information, and then my mom “Debbie” read us a letter from Daniel “Robert” that said he was dead and had suspected he would be murdered. There were a few clues: some coordinates, a phone number, a note from a mob boss “Tony” with a phone number, and a picture of a key. There was also a locked safe.

We sat and ate some dinner and discussed what to do. After we finished, we followed the coordinates to one place and found a container with some clues, we called the phone number and got Dallin “Rodger” who told us to go to a certain park and look under a trash can (which had a folder with more clues), and we set up a meeting with Tony (my dad, of course) at the mall food court, where he gave us a bag with more clues.

Eventually we found the key at the church, went back and opened the safe and found out the truth: Rob’s character wasn’t really a detective- he was VP of Robert’s (Daniel’s) company and had poisoned him. Rob revealed himself, at which point Daniel entered and revealed that he hadn’t actually died! It was actually a lot more involved than that and took us about three hours to complete it all, but those are the main details.

It was really fun, and I give Tony awards to Chris for his outrageous character and making us all laugh and break character, and to Alma for his incredible character-revealing monologue that just rolled right off his tongue! My two favorite moments were when we got to the park with the trashcan: I got out of the car and ran to retrieve the folder, when Rob’s voice stopped me, wanting to know what I was doing. Luckily I was able to signal to Chris to distract him, grab the folder, and pass it to Alma, and then make up an excuse for us all to leave. My other favorite part was when we got back to the house with the key to the safe, to find Tony trying to drill it open!

Here’s some pictures of the party. What a great birthday! 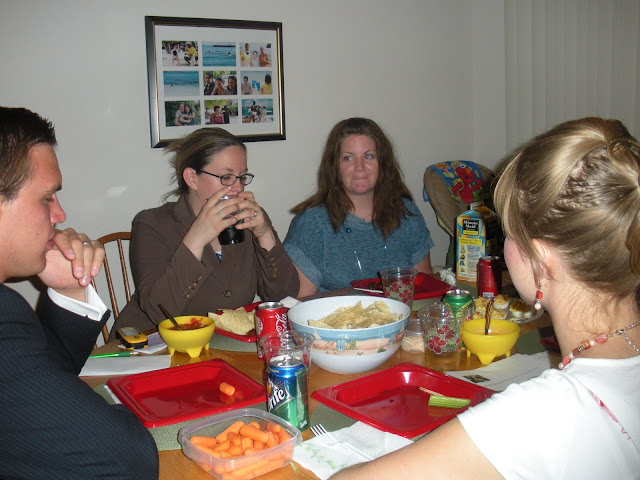 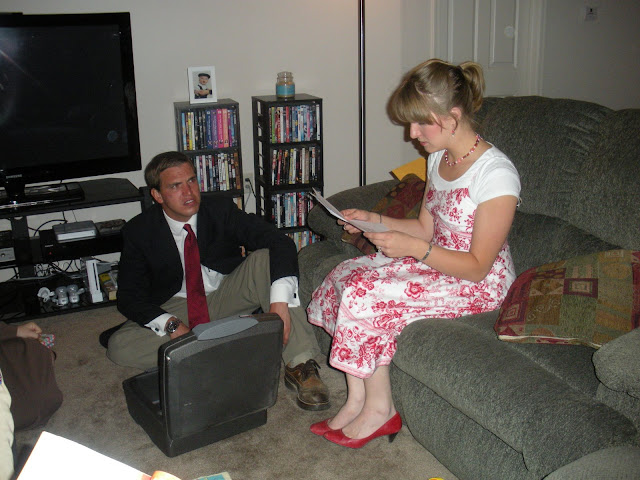 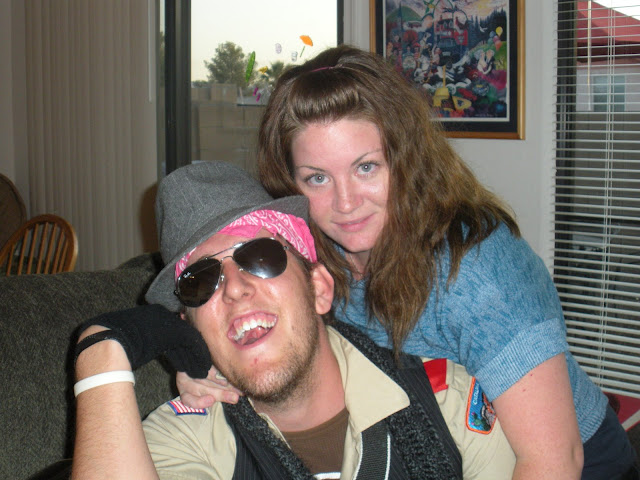 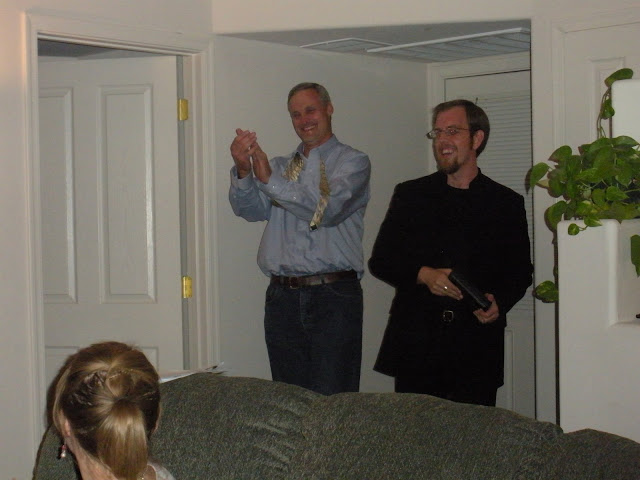 And it’s not even over yet! My real birthday is this Saturday, and I’m going to be participating in National Tap Dance Day in Tucson. I have an advanced master class on Saturday, which continues on Sunday and then we will perform the dance we learn in a show Sunday afternoon. I’m also taking a style sampler class on Sunday, as well as attending the professional tap dance show on Saturday night, with Daniel.

It’s been a good month so far! Should have our house by the end of this week…!

holy talito burrito!! sounds like a super fun party, but could only be pulled off with the right group of people and it sounds like you got that part. hope you’re doing well. HAPPY BIRTHDAY. have a fun summer. see ya in august (hopefully)