Monthly meal planning…a.k.a. only one time in 30 days do I have to decide what is for dinner. That’s my style.

One of my November goals was to make a December calendar and plan out an entire month of meals before the month even started. Along with that goal, I wanted to write out what groceries would be needed for each week, for the meals I had planned. I thought it would make things easier to have meals planned in advance, as well as having a little slip of paper with my grocery list all ready to go. I’d just need to add whatever staples and breakfast/lunch items we needed for the week, and I’d be all set.

I was right! So much easier than planning week by week (or cough, cough day by day)! Also, we have STUCK TO IT! There’s the amazing part right there. I knew that throughout the month I’d have to rearrange some meals, based on how our events and schedules shifted, but with the calendar all done, that’s as simple as drawing a few arrows.

Here is what my finished product looked like, taped to the fridge: 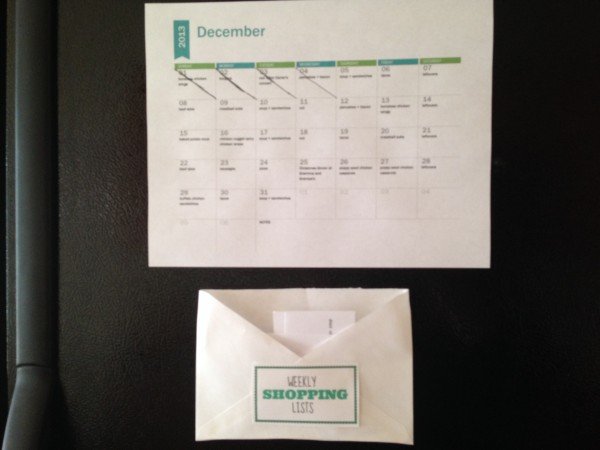 The calendar I made with an Excel template. Did you know they had those? I used to print off plain calendars from a website, until I discovered this lovely-looking, colorful spreadsheet calendar. Once you open it in Excel, you can select the month and year, and it automatically populates the correct dates.

I set the calendar to December 2013, and then I just went through and typed in a meal for each day. First I went through and noted any days we would be away or likely to eat out (such as this past Tuesday night, after Carter’s holiday concert). Then I made sure each week had an “eat out” night planned, since we usually eat out once a week. Then I decided every Saturday would be “leftovers” (which sometimes translates to a $5 Little Caesar’s pizza, as it did this past Saturday), and there was one more night each week that I labeled “soup and sandwiches” which can mean literally soup and sandwiches, but really is a euphemism for “everyone be scrounging.” That could be a macaroni and cheese night or a frozen chicken nuggets night, etc.

So that left four nights a week for me to make an actual meal. Sundays I like to do crockpot meals because we have church from 1-4, and it’s nice to come home to dinner all made. Next year, though, we’ll be going to 9am church, which means we could do the same thing for lunch, but Mama would have to be on her game to get the food in the crockpot early enough!

In our first week of our monthly meal planning, we had boneless chicken wings, protein burgers, pancakes and bacon, tacos, buffalo chicken sandwiches, the before-mentioned Little Caesar’s pizza, and we had subs from a sandwich shop the night of the concert. That is probably more cooking than I did for the rest of 2013 (#notreally #close).

Once I taped up the month’s meals, I found an envelope, cut off the flap, and kind of flattened out the bottom so it would pop out a bit. Then I just made this cute label on picmonkey, printed out my shopping lists, and stuck them all together! 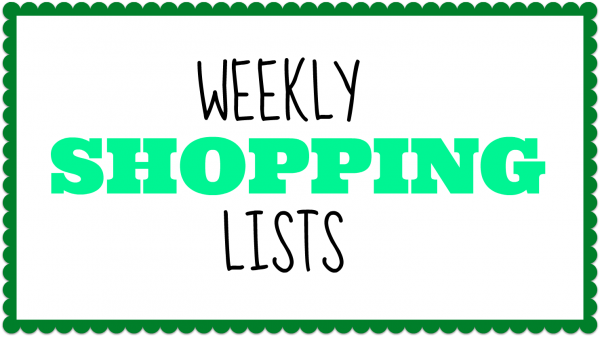 The one thing I did wrong was that I made my shopping lists for each Sunday through Saturday. We get paid every other Thursday/Friday, so I had to combine lists when I went shopping. Next time I’ll plan that out better.

The meals I planned were a combination of go-to meals (such as tacos) and a few new recipes (baked potato soup) to try out. I also went heavy on the soups/stews/hot & hearty meals that are good for this time of year!

I’m checking off #5 on my 30 Before 30 list, as this new system takes care of both of those goals (having a system for planning meals, and expanding my repertoire of meals).

One of my December goals is to do this all again for the month of January! It’s already proven to make things run so much more smoothly, so monthly meal planning is a keeper!

How do you plan your meals? Would you like to do it only once a month?

Give Beauty for Christmas

What I Learned From the First Week of Kindergarten

[…] I need as much help as I can get in the kitchen. I’ve been trying to do much better lately (and succeeding!) at planning and cooking our family meals. But sometimes life and schedules get in the way, and […]