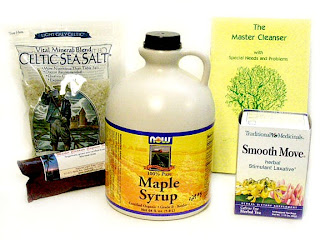 So last month I took a fun little trip with Carter, where we drove to Payson and spent a night there with Jared and Kadi and the kids, and then we drove to Chino Valley and spent a night with Chris and Lindsay. While I was in Chino Valley, Lindsay and I talked a lot about dieting and exercising, and about how she’s got herself on the right track as far as eating, and she told me about the Master Cleanse, which she tried and credits for getting her healthier and eating better.

Basically the plan goes for ten days and consists of lots of water, a lemonade mixture made from water, pure lemon juice, and pure maple syrup, cayenne pepper tablets, a sea salt mixture, and a laxative tea.

To be honest, I don’t really buy in to the “cleansing” part of it, mostly because Daniel debunked it for me, and he made a lot of sense. I also found an article claiming that the cleanse is a hoax, which said pretty much exactly what Daniel said. But, there have been other benefits. First of all, I’ve realize how little I really need to eat to stay alive and even satisfied. I thought the first few days would be hard, but they were actually pretty easy, because I got enough calories. So I wasn’t hungry; I just wanted other things! Secondly, our bodies are clearly wired for survival, because the first few days I had my normal cravings for junk, but on the second half, I started craving more substantial, healthy things like grilled chicken.

It’s gotten harder the past few days because I’m so sick of the lemonade that just a sip of it makes me want to throw up- so I’m basically living on water right now, but I’m determined to finish! I fully expect to gain back a little of what I’ve lost once I start eating solid food again, but this has brought me much closer to my goal weight, so I’m more motivated to lose the last few pounds! I plan on hitting the running and the salads hard next week, so that the pounds keep coming off.

We are planning on trying for another baby starting in May, and I will not do it unless I’m AT LEAST down to my prepregnancy weight, but hopefully further than that. Plus I have a performance in November I’d like to be looking good for, and another goal is to go swimming in the Pacific on the show choir trip in February or March.

So master cleanse, I don’t really believe your scientific claims, but I can’t argue with the quick weight loss, even if I do know that I’ll have to work harder to keep it from coming back!