Latest Posts
My 7-year plan, 7 years later
Best Christmas Gifts for the Family 2020
Thanksgiving Handwriting Worksheets
Chipotle BBQ Chicken Lettuce Wraps with enspice
Cover up your grays and uncover your confidence
Halloween Handwriting Worksheets
Boost your immune system with elderberries
5 Helpful Tools for Handwriting Practice
5 Sensory Books You’ll Love Reading with your Baby or Preschooler
Always Eat After 7 PM final thoughts
Home » Travel » “I should be riding on that train to San Anton’. What am I doing hanging round?”

“I should be riding on that train to San Anton’. What am I doing hanging round?”

Daniel, Carter, and I left Tuesday morning for San Antonio. I said I wanted to leave by 9 (because I figured if we left by 10 I would be happy), and we actually pulled out of the driveway at 9:10! The day was pretty uneventful. We drove to Las Cruces, NM, where we stopped for food and a break. Carter was just an angel in the car all day. He was either sleeping or awake and happy, and Daniel and I each spent some time with him in the backseat. We stopped a few other times for gas and food and to feed the baby, and we even tried to get a geocache at a rest stop in Texas, but it had gotten too dark to see properly.

We got to our hotel a little before 1am and pretty much went right to bed. The room was outstanding (especially for the price)! We had a kitchen with a fridge, microwave, and stove, a couch, large tv, and a king size bed. Carter’s pack and play fit nicely along a half wall separating the bedroom from the front area. I figured he would be up all night after sleeping so much in the car, but I only had to get up once to feed him. 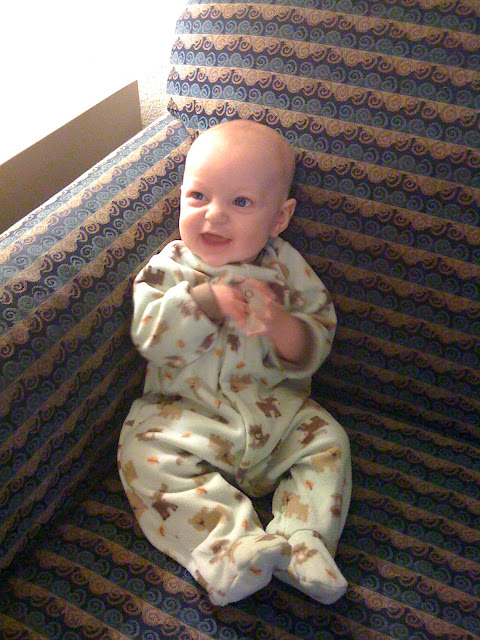 We left the hotel on Wednesday morning around 9:30am, after getting some of the free hotel breakfast. We drove into downtown San Antonio and went right to the riverwalk and took a tour boat cruise. It was a nice, relaxing ride around the river, and it was a good introduction to the city. 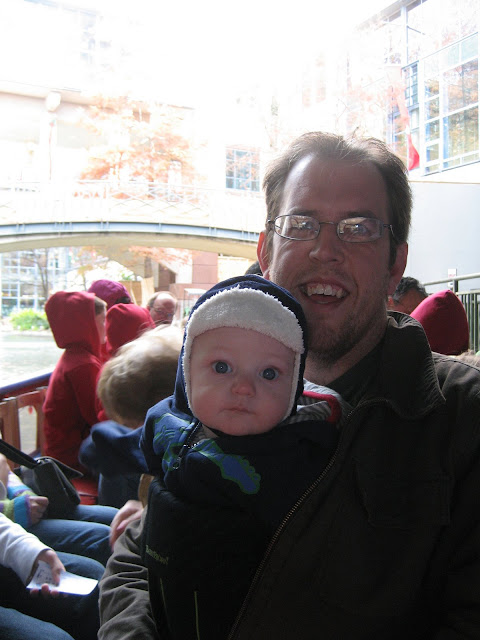 After that, we went over to the Alamo and walked around in there and learned more about its history. Then Carter needed to be fed, and then so did we! We ate at the Hard Rock Café, out on the patio by the river. I got the waiter to take a picture of us, so we would have at least one of the both of us. 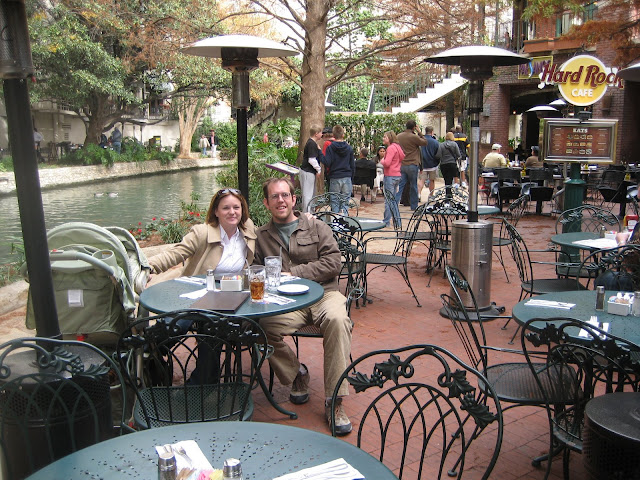 By the time we were done it was about mid-afternoon, and I had planned a nice long break in the middle of the day, since we planned to be out until midnight, so we headed back to the hotel. On the way we stopped at the beautiful Japanese Tea Gardens to walk around a bit and check out the Sunken Garden outdoor theatre. We also failed at getting another geocache there. Man, we suck at that. From there we went to the hotel for our break. 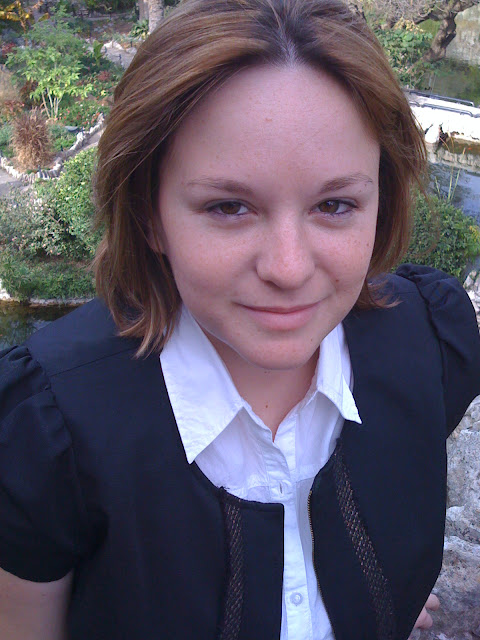 We headed out again around 8 and spent quite awhile walking around the riverwalk trying to decide where to eat dinner. Finally we got so hungry that we just picked one that we were close to- a Mexican restaurant. We figured it would hit midnight while we were eating, but we finished with about ten minutes to go. We headed up to street level just in time to see the fireworks, and then we went to the hotel for the night. 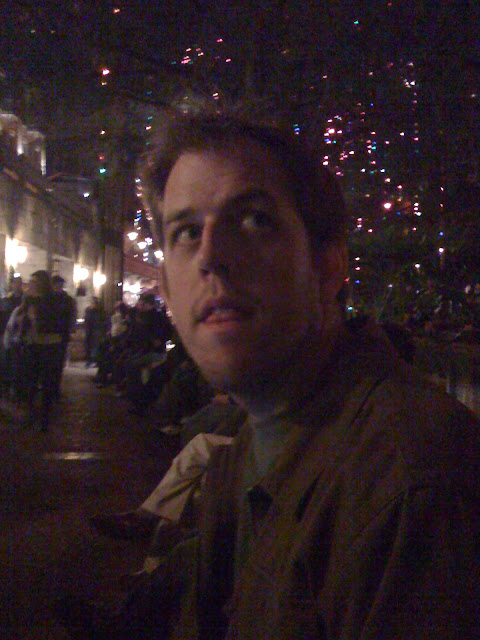 On day number two, we started by going to see the San Antonio temple. We found a krispy kreme on the way, so of course we had to make a stop! The temple was closed for the holiday, and they also had the gates closed, so we had to admire from a short distance. From there we went back downtown to do some local shopping. Some places were open, but for the most part stores were closed for the holiday. So that was a planning mistake on my part, but I got a cute, handmade snowman Christmas ornament from one of the shops that was open, so I was happy.

We also walked through the San Fernando Cathedral, where mass had just ended, and it was a combination of people praying and people taking pictures…a little different. In the village area we were shopping in, there was also the Arneson River Theatre, which we had passed on the tour. The seating is on one side of the river, with the stage on the other, and it is very pretty. We had to spend a few minutes individually envisioning the theatrical possibilities, and then we moved on. 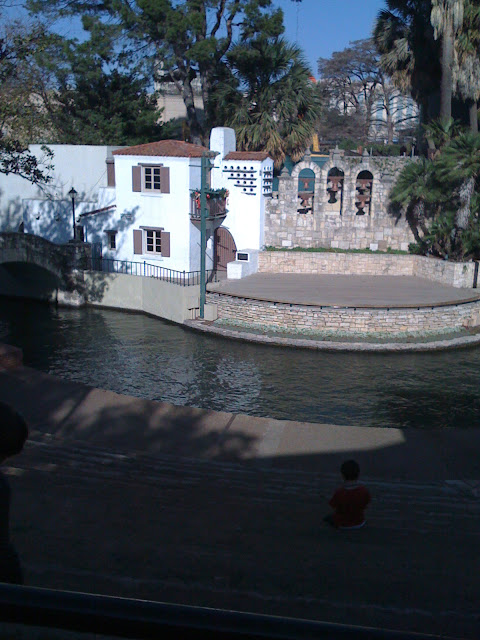 It was time for lunch, so we found the place I had planned on, but it was closed too! It was a church that had been converted into a theatre, so I had just picked it in hopes that we could check out the theatre space, but no luck there. So instead I made the (third) mistake of letting Daniel pick lunch. After driving around and “urban spooning” it (I’ll give a point to someone for that- not a quote though), we finally just ate at a local pizza place.

Then Carter needed to be fed, so we did that, and then we went over to the Ripley’s museum. Daniel dropped us off at the Hard Rock so I could buy a few things in the gift shop (Hard Rock onesie!), while he parked the car, and we met at the museum. We spent a couple of hours looking around in there; it was huge!

Then it was getting late, and there was one other thing I wanted to do which was supposed to close at nine, so we drove there- to the McNay Art Museum, to find it closed! They had an exhibit with sets and characters from The Nightmare Before Christmas, and their website said that the exhibit went through the first, so I assumed they would actually be open on the first! They were not. But, that was the one and only thing I wanted to do that we didn’t do, so I wasn’t too upset.

Before leaving that area, we drove through the huge light display at the University of the Incarnate Word, and then started looking for dinner. For both days on our itinerary I had put, “Dinner at Some Place that Looks Cool,” to appease Daniel’s affinity for the unplanned, but never again! That boy CANNOT make up his mind! After passing approximately 52 Bill Miller BBQs, none of which were open, we finally sat down at The County Line restaurant, and boy was it worth it! Daniel got a plate about 20 feet long with different kinds of meat on it, and I had the best, yes best, cheeseburger I have ever eaten in my life. And it was sad too, because I only ate half. Carter woke up and got fussy, so we had to cut it short. We took the extra food home, but I knew I wouldn’t want it later that night or in the morning, so it got thrown away. And just as I expected, halfway home the next day I really wished I had it! Not that I could have warmed it up in the car anyway, though.

So the next morning I went out while the boys were still sleeping and got us Krispy Kreme again (hey, if you are not from AZ, then you don’t know that all the Krispy Kremes here closed, so that’s why we were so excited and had to get it twice!), and then we got on the road home. But before leaving town, Daniel finally found us a geocache, near the Krispy Kreme!

The drive back was pretty uneventful, and I think we were back in St. David around 11pm.

So it was an extremely enjoyable trip! We went some place we’d never been, with a baby, did everything we wanted to do, and we had tons of fun!

Hope you liked reading about it and seeing some pictures!

Everything Happens for a Reason?

Quote is from The Monkees!

You mentioned that Carter was an angel on the drive to SA. Actually, he is always an angel!! That picture of him on the couch is adorable!! Sounds like you had a great trip, and I’m jealous that you’ve eaten at a Hard Rock Cafe that I haven’t.

We experienced the same thing at the San Fernadno Cathedral. People praying + people taking pictures. It was definitely odd. We did not take any pictures inside, it felt disrespectful.

We very much enjoyed the boat ride at the river walk.