Years ago I made a bucket list. I didn’t even know the term “bucket list” yet. It was just a list of 1001 (literally) things I wanted to do before I die. One of the items was “run a marathon.” 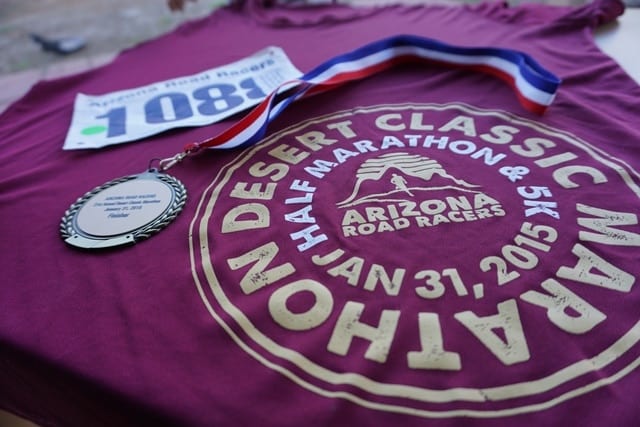 When I added that to the list, I didn’t really know if I would ever do it. I have never been a runner, just someone who likes to set and achieve goals.

A few years back I ran a 10k, and then a half-marathon. At the end of the half-marathon, all I could think was, some people run twice as far?! I couldn’t imagine turning around and running all the way back to the starting line.

If you’ve been reading my blog at all over the past four months, you probably know that I decided to train for and run a marathon, and I did it.

I started training in mid-October, and the big race day was January 31st. I decided to run the Desert Classic Marathon, put on by the Arizona Road Racers, and held in my own town! Convenient, for sure, plus January is a great month to run in Arizona! I trained for my half-marathon in the summer here, and it was killer.

Training went well. I’m slow, and I missed a good handful of scheduled runs, but I worked very hard and got through it. There was no doubt in my mind that I would finish the marathon…but how long it was going to take was the question! 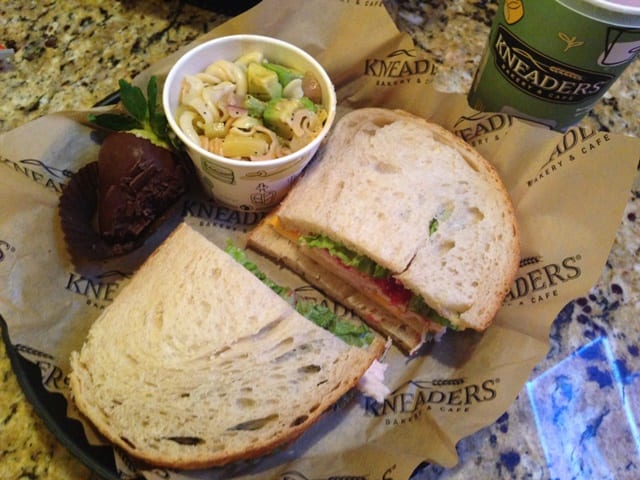 My “night before” meal

The book that I used for my training program, The Non-Runner’s Marathon Trainer, encouraged readers (begged, really) to not set a time goal for their first marathon. But being as slow as I am, I just wanted to finish before everyone had packed up and gone home.

About a week before race day, I looked up more information on the marathon…and was shocked to see that last year only 32 people ran the marathon. I almost quit, seriously. After 15 weeks of training, I wasn’t going to not run the marathon, but I was considering looking for a different one. With hundreds of runners I could blend in and surely wouldn’t be the last person to finish. With 30-40 runners, it was almost guaranteed.

Because here’s the thing (and this is something I didn’t realize until the end of training)… I chose to compete (well, participate) in something that I’M NOT GOOD AT. I’m not being modest- I’m a terrible runner. Yes, I finish, but it’s not impressive. If I decided to do a singing competition, okay I might not win, but I’d put up a good fight. There are other things that I could have chosen to do where I actually have a little bit of skill. But I was determined to do something difficult. And it was difficult!

One of the things I liked about this marathon is that they had the option to start an hour early, which I took! We started at 6am, in the dark, and that first hour of running in the dark was incredible. In the first few minutes, I passed a sign facing the other way. I turned around to see what it said, and it was the 26 mile marker. I was so excited, picturing seeing that sign again later in the day, when I was almost finished.

Daniel had created a playlist for me, and I just enjoyed the first hour of running, mostly by myself and under the cover of darkness, listening to the songs he had put together. I felt great.

At mile 5, a friend from church and her sister and other friend caught up to me, and we chatted a bit before they ran on ahead. I saw them again a little before the turnaround point, when they were headed back. 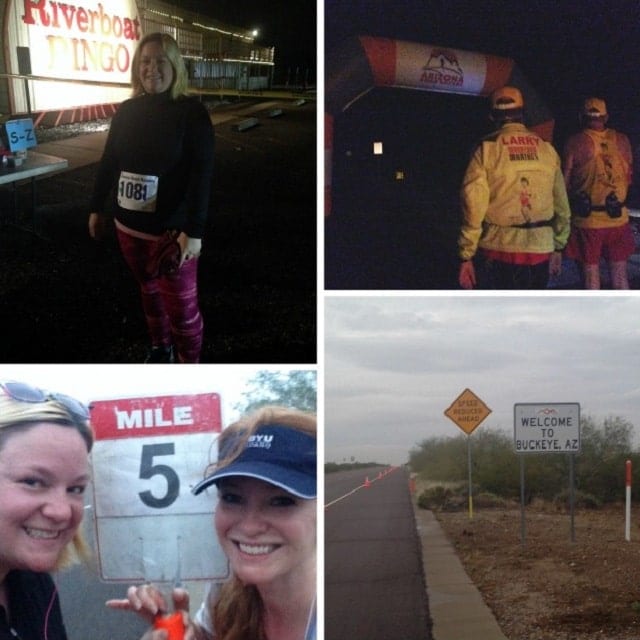 As I neared the halfway point, at 13.1 miles, I was pretty sure that there was nobody left behind me. That was confirmed once I did turn around and didn’t pass anyone else. There were a few people not too far ahead of me, but I never caught up.

Daniel and the kids were supposed to meet me at the halfway point, but he drove too far, and they were too far away from the point where I turned around, and I wasn’t about to keep going! Instead, at mile 14, they popped out from behind a bush and surprised me!

I was excited to see them but feeling really tired, and I almost blacked out. Daniel said Vanessa wanted to run with me, so she took my hand and ran for a moment. Then I ran on ahead. 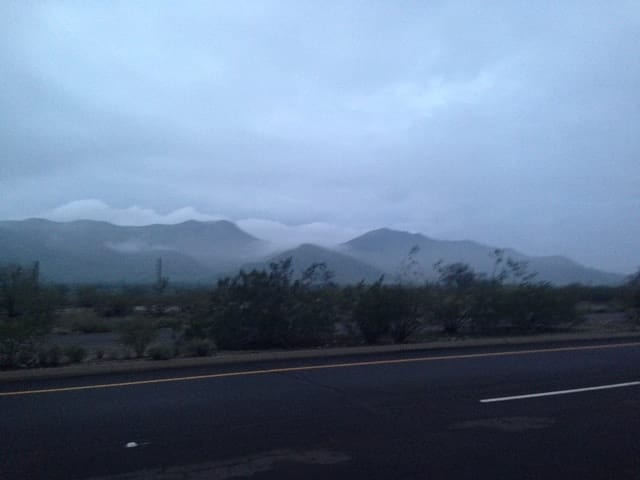 A rare cloudy day- perfect for a marathon!

At the halfway point, I was doing well time-wise, for me. But the second half of the race took me longer than the first half. It was really difficult to have run 16 miles and then realize that you still have 10 miles to go. It was incredibly difficult to not have anyone around me. I felt really alone and even though I knew that people were still running ahead of me, it felt like everyone had probably finished and gone home a long time ago. I just took it a half mile at a time, looking for the signs and the water stations every two miles.

The race was all on the shoulder of a road in the desert, so there was literally no place for spectators to cheer on the runners. Like I said before, I felt very very alone and very very behind.

With 10 miles left to go, I texted Daniel after each mile to let him know where I was. With about 2 miles to go, he drove by, checking on me, and with about 1.5 miles to go, my parents drove by, and my mom jumped out and ran the rest of the race with me.

That was so helpful. I had been feeling terrible, both from having run so far for so long, and from the self-loathing that made its way into my head from being so slow. But once my mom joined me, I was able to laugh and joke about everything, and I enjoyed the last little bit of the race. She also told me that they had just watched someone cross the finish line, which made me feel so much better, because I felt like everyone had finished hours before. My mom joked that everyone was going to think she had just run 26.2 miles too.

Finally we came into view of the finish, and I saw one of the race volunteers waving my medal. They made a little bridge for me to run under, and then I was done! My dad, my husband, and my kids were all waiting there to congratulate me. 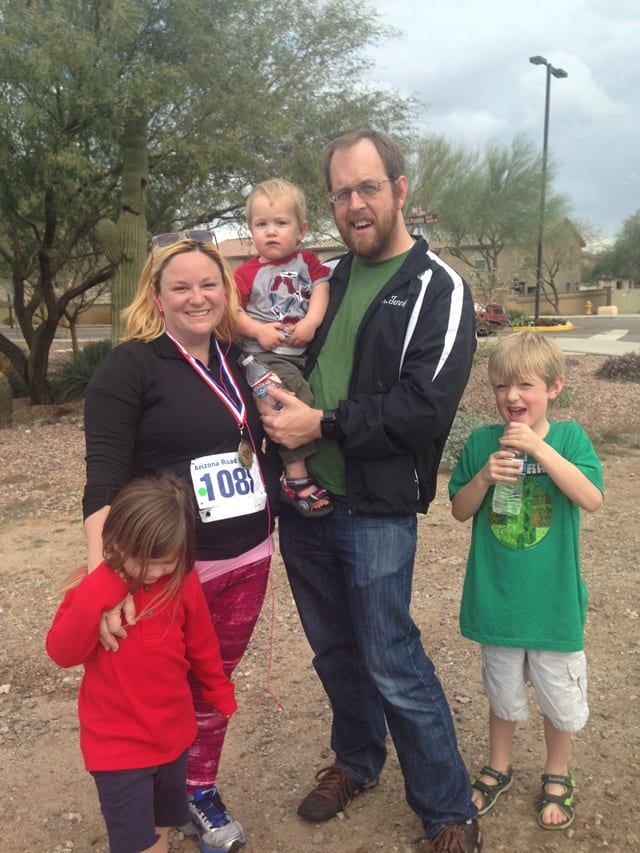 And that was it! Daniel had brought me a coke that I had requested, and then he took me to Burger King. Ironically, after running so long, I wasn’t super hungry because my body mostly just felt like it wanted to fall apart, but I ate a little anyway. Then we went home and I lay in bed for a good portion of the rest of the day. I thought I would sleep, but I didn’t. It was nice to just relax though. Walking wasn’t easy for the rest of the day and the next few days!

So the big question that everyone asks now is, “Would you do it again?”

At first my answer was an emphatic “NO” (even before running the actual race), but I think I could be convinced. Honestly, part of me feels like I missed out on a better marathon experience. There’s definitely something to be said for running a race with tons of other people, with live music, and spectators cheering you on, like they have at other races. Also, I was kicking myself for not choosing a marathon that’s mostly downhill. Plus, Daniel said I might be able to convince him to run one with me someday.

So for now my answer is a drawn-out, “Maayyybeee…” Certainly not anytime soon. I am hoping to have a baby next year, and it would definitely be after that excitement has slowed down. But maybe.

It’s been hard to feel accomplished having finished last, even though my goal was never to win or even to not be last. The idea was to complete something that is generally considered to be very difficult, and something only a small percentage of people ever do. And I did it. 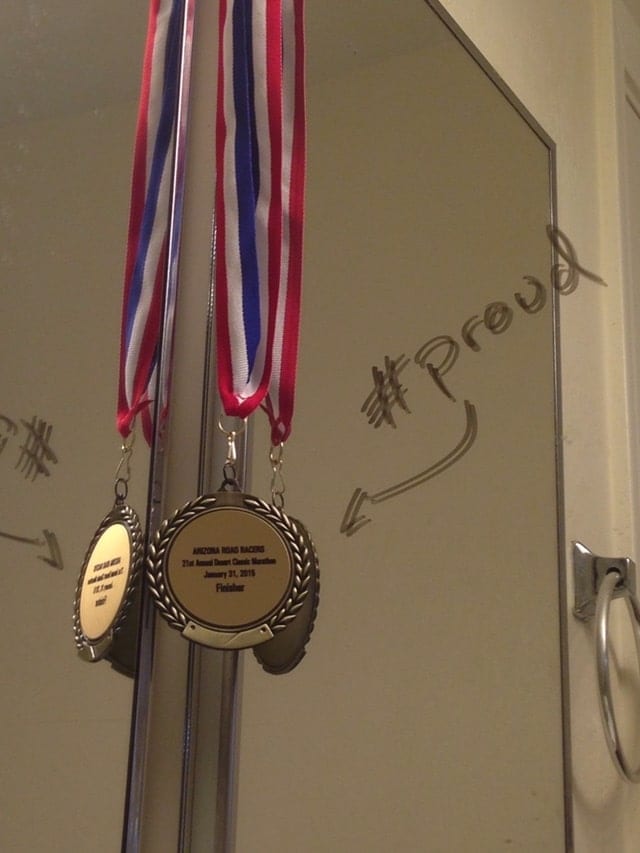 If you think you might want to run a marathon, check out my Marathon Training Plan for Beginners page. There you’ll find links to information and my reflections on each week of training, as well as the training schedule. If you decide to run, or already have, I’d love to hear how it went!

What major goal have you accomplished? Tell me in the comments!

15 “Old School” Outside Activities For Kids

I am so proud of you Megan. You did wonderful and running a marathon is something that not everyone can say they have done before. You can, so be proud of that.

Thanks so much, Asha!

That is amazing! I’m so impressed! Last year I ran my first half marathon and I, too, felt like I was missing a part of the sense of accomplishment I had hoped to feel. I knew I could do better. I signed up for a marathon but didn’t get any chance to train so I didn’t even run :(. I think this year I’ll sign up for a half again and hope I can train.

Thanks Valerie! I don’t know how long it will take for all my training to sort of wear off, but I loved the fact that I was in good enough shape that I could have run a half-marathon at the drop of a hat! I could definitely see myself running a half-marathon again- maybe a Disney one!

I am so proud of you for doing a full marathon, Megan! That is so far! I remember finishing my half and feeling like you did! Thinking, I’d only be half way done! I’m not sure I could ever do a full, knowing how exhausted and lonely I felt doing just a half. You might have been last, but you finished and that is more than a lot of people can say. When I wrote my post about my half I shared this quote, “The miracle isn’t that I finished… The miracle is that I had the courage to start.” Be proud of yourself!

[…] wrote about each week of my 16-week marathon training plan, plus a full recap of the marathon itself. But what happens after the race? You train hard and then run 26.2 miles and […]