I took Harrison to his newborn checkup on Wednesday, where they did the usual newborn tests, along with a blood draw to check for hemophilia (which runs in my family). In order to do that test, they have to take a good amount of blood from baby’s arm, which is not a usual practice for little ones. They poked his arm but weren’t able to get a vein, so they retried on his hand, which did work. 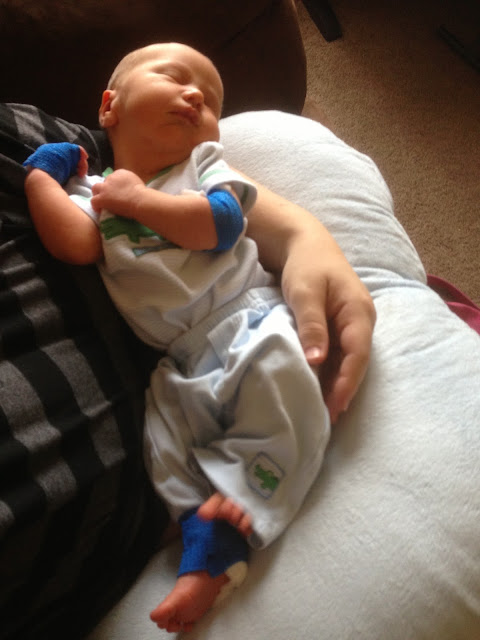 Poor little guy was bandaged all over!

He cried some, but he was calm for most of the (long) time they were drawing blood. Incidentally, he wore the exact same outfit Carter wore for his hemophilia test, almost five years ago! Want to know how I know that? Because of this: my 12th ever blog post!

We came home after his visit and in the afternoon we took a delicious nap together in my bed. Nothing quite like cuddling with a newborn!

In the early evening, our pediatrician called. She had Harry’s bilirubin levels checked because she thought he looked a little yellow, and sure enough, his levels were high enough to warrant readmitting him to the hospital. She said on the phone that we wouldn’t be there too long…just a DAY OR TWO.

I was totally thrown off, not knowing if I would be staying with him, how long we’d be there, etc. I should take this moment to point out that I am incredibly grateful for how lucky we’ve been, because I know that other moms and babies deal with much greater complications and health issues, and many babies stay in the hospital nursery for weeks and months. Here I am complaining about a day or two, but like I said, it threw me off.

So I packed some things and headed back to the hospital with Harrison. We got there at about 7pm, when they were switching shifts, so we sat in the waiting area until 7:30 when someone came to get us. Luckily the nursery nurses were awesome and really friendly, and I calmed down right away.

I hadn’t nursed him in about two hours, so I asked if I could nurse him before they started treatment, and they said of course. They took blood to test his levels again, and then he was put under the bili lights. 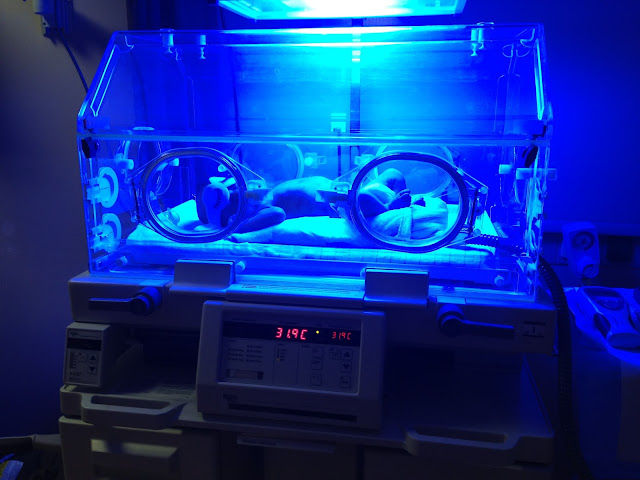 I found out that I wouldn’t be staying with him, but that he needed to be fed every three hours, and that I could come in to nurse him for all of them or some of them. Luckily we live only a mile or two from the hospital. So I went home, pumped some milk to bring back (which they had asked me to do), and then went back at 11pm. I fed him then, left the milk with them, and told them that I would skip the 2am feeding and come back at 5am, which they said was just fine.

So I got a little sleep and then went back at 5am to feed him again. Shortly after I left, they did his blood work again, including another draw for the hemophilia test, since they said the first one was inconclusive. When I went back again at 8am (which I almost missed because Vanessa stole my phone/alarm clock), they said that his bilirubin levels were down to 14-something (from 21.6 at the doctor’s the day before and 20.6 at the hospital). They called the doctor while I was there, who told them to turn off the overhead lights and just use the biliblanket and test him again at 4pm. 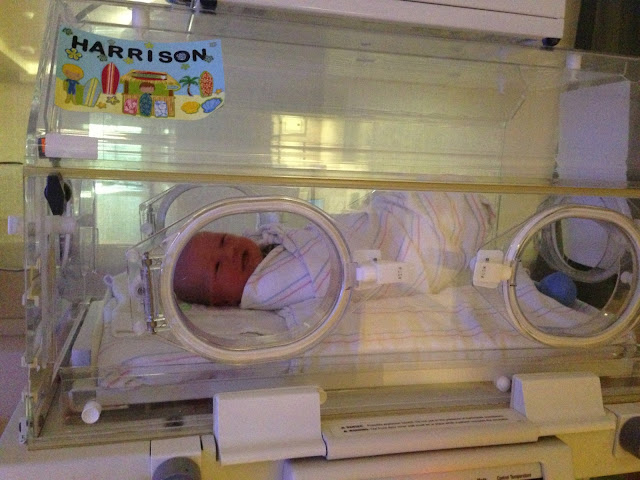 The nurses made him this cute little name tag: 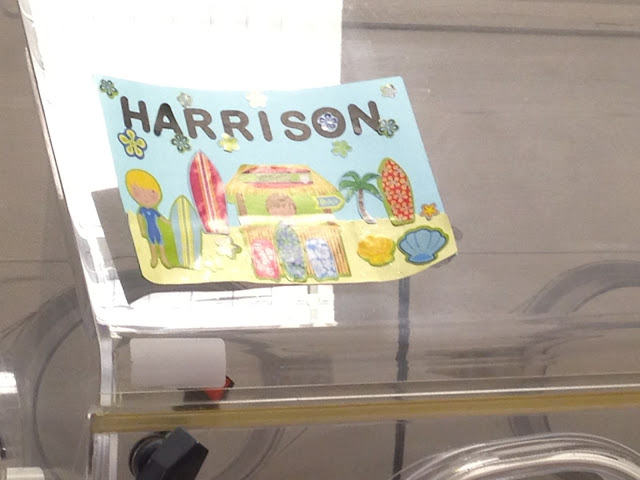 I decided to let him have formula at 11am and to go back to feed him again at 2pm, and in the meantime I went to the new house and spent a good couple of hours cleaning and putting (back) together his crib. When I went back to the hospital at 2pm, the nurse told me that the doctor had come by to see Harry and mentioned that after they checked his levels at 4pm, they would turn off all the lights and test him again “in the morning.” The nurse told me that she said, “You’re going to make that poor mother wait another night?!” So instead the doctor said to turn off all the lights right then, and they would test him at 6pm instead.

So I was hopeful at that point that he would come home in the early evening, since he was obviously doing better, and my parents were bringing dinner over and wanted to take pictures of the kids in their fourth of July patriotic clothing that my mom had put together. When I went back to feed him at 5pm, the nurses decided to go ahead and draw his blood an hour early to see if they could speed things along. By the time I had fed him, around 5:40, they had the results back (dropped another point to 13-something), so they called the doctor while I was still there. On the phone the nurse said, “Can we just send them home now? She’s planning on having a big family chicken dinner!”

So we went home with the promise that we’d make an appointment to follow up with the doctor first thing in the morning, and we got home right at 6pm- just in time for chicken and photos! After both of those things, we went to our new house, where we were able to see the fireworks from our backyard!

My mom did the best she could with three wriggly kids!

This morning I took Harry back to see the doctor, where she said he looked much better. I also told her that I was not, in fact, begging to leave the hospital, and that it was the nurse who was more concerned about my chicken dinner! She had his bilirubin levels tested again (MORE needles for this poor little man), and she’ll be calling later today with those results.

And lastly, she told me that the two blood draws to test for hemophilia both came back with basically a “maybe” result. So now he needs to be seen by a blood specialist who will be able to determine whether or not he actually has hemophilia, and we should be able to get that appointment next week, before his scheduled circumcision the following Monday!

So…yeah. Just a few complications this time around! He seems to be doing great, though, and he’s sleeping peacefully here next to me. 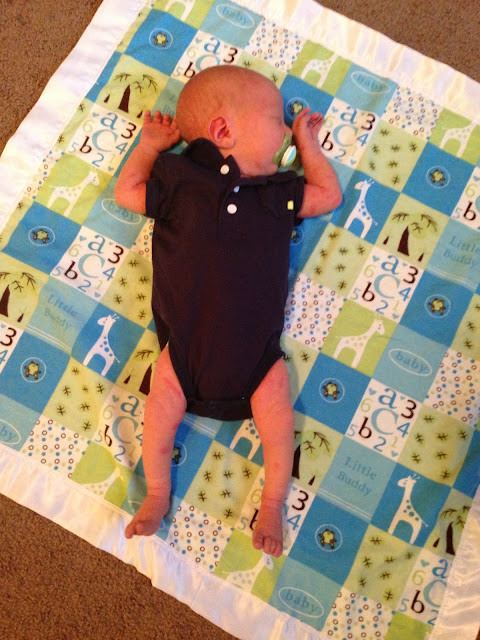 And that was Harry’s Big Bad Busy Day.

Wow what a busy couple of days! I’m glad things are good and he is back home! And you have beautiful babies! I love that Harrison is passed the heck out on your daughter’s arm!

He is such a handsome little guy. I’m so glad everything is working out. An in call pediatrician tried to keep Violet in the hospital an extra day due to her levels even though her pediatrician had cleared. I almost flipped,,thank goodness for nurses who can intervene for Mamas!

Glad to hear your hospital stay was short and your baby boy is back home with you! He is adorable!

Glad he’s back home with you all, he definitely looks like he needed that nap against your daughter!!

oh my friend! I am glad he’s doing better and that you managed to get some sleep!! I think harry looks like daniel! :) and look at those tiny little legs!! so cute! ahh! :)