This has been my stress this week: trying to figure out what everyone is going to wear for our family photos on Saturday!

A few months back I won a giveaway at and here’s to you, Mrs. Robinson, for a 50% off photo shoot with Alisha Hunsaker Photography. I was really excited to win, because I knew I wanted to do family photos this year. We’ve had photos of the kids taken regularly, but we’ve only done family photos one time, in 2011. Time for an update! I thought this fall would be perfect because that gave me some time to bounce back from pregnancy, and Harrison wouldn’t be a super new-newborn. Also, we would have nice photos to send with Christmas cards…which we’ve also never done!

I have an idea in my head of what our outfits will look like, but I’m still not convinced it will all come out the way I’m picturing it. I even drew a stick figure mock-up, but the colors weren’t exactly right: 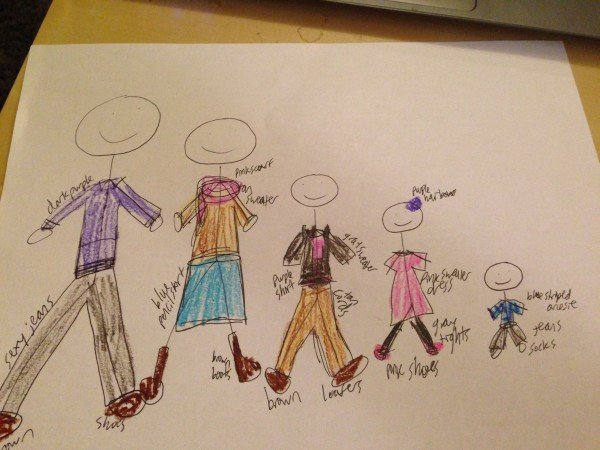 My basic idea is to use jewel tones (blue, purple, and pink…yeah basically my blog colors…hey I like what I like) combined with neutrals, primarily gray and brown. I don’t like the idea of being super matchy (i.e. everyone in jeans with the same color- or even different color- tops). I want to balance out the color by having some wear it on top and some on the bottom (which basically means guys have color on top and girls have color on bottom, because I don’t think any of the boys will want to wear turquoise pants- their loss). I also want to have a nice balance of textures, if not patterns. So for example, a cable knit sweater on me and dark denim on Daniel and cords on Harrison, in addition to all the smooth cotton pieces. Most pieces will be solid colors, but I think Harrison will have a striped onesie, and maybe I will incorporate one other pattern on someone.

Here is what I have planned:

These are not the exact clothes, but close. He’ll probably have his shirt untucked, too. 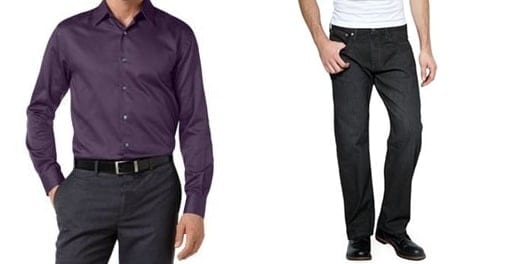 I love the idea of the magenta tee, and it looks adorable on him, but I think it clashes with Vanessa’s dress, so I think he’s going to need a different one. I’ll probably go with a blue or emerald color. If I go with emerald, then the three kids should look great together, and I’m hoping we’ll get some photos of just the three of them. An alternate idea is to get him a plaid button down shirt with all the colors mixed in. I like that idea because it brings another pattern into the photo, along with Harry’s stripes.

So I really loved this dress from Target: 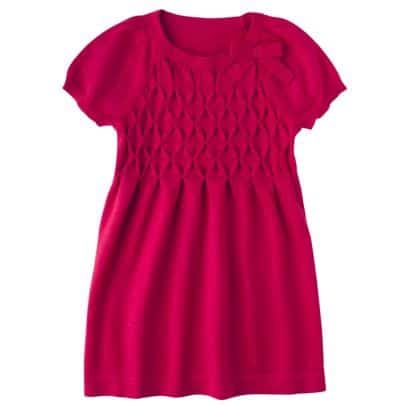 Which is clearly a perfect jewel-toned pink, right? Wrong, it was red.

The great dress search of Monday, November 18th resulted in me finally ordering a dress from the Kohls in-store kiosk (free shipping). I figured there was at least a chance that it would arrive in time. The estimate had it arriving as early as Friday (which is the latest it could arrive in time for photos), and as late as next Wednesday. Kohls is usually really quick with shipping and sometimes those packages come before the estimated dates, so my fingers are crossed. If it doesn’t come in time, I have a few backup ideas, and I can always return it when it does come.

So this is plan A:

And this is plan B:

Except that gray shirt isn’t in stock in my Target (short sleeve version is), so even my plan B won’t be exactly that.

He is all set, except that so far he is the only one with a pattern, so we’ll have to see if that works out. His onesie doesn’t have that little emblem on it. 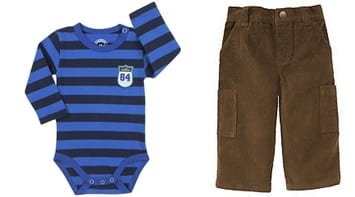 I know I need to lay all the clothes out on the floor to see how they go together, but I have a couple pieces left to get before I can do that.

And lastly, I am not ruling out the idea of doing a “dry run” and having everyone put on their outfits and take a few self-timer photos to see how they look!

I know it’s a silly thing to stress about, but I want nice photos. If they come out great, then I could see using one for a large print somewhere in our house, not to mention using them for Christmas cards, on this blog, on Facebook, etc!

Oshkosh Back To School Fashions

Ready for Spring with OshKosh

You are a girl after my heart!! I do the EXACT same thing!! Im a visual person.

Oh I just bought outfits for our pictures on the 1st. I love picking everything out. We had our pics done in July and I absolutely love how they turned out, we did navy and pinks. This time we are doing red, black and white. Yay for pictures!