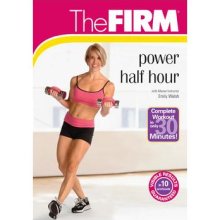 I did this dvd workout today, after having bought it at Bookmans months ago. The dvd box doesn’t give much of description of the workout except that it’s a “full body workout in 30 minutes.”

I LOVED this dvd!

It was just 30 minutes, as promised, and it was pretty much a full body workout. It’s broken up into 7 segments that are about 4-5 minutes each, but I might not have known that if I hadn’t looked at the chapter breakdown, because they go right from one section to another without a break in the filming.

The first section is a warm up, which is like a lite cardio. Then it goes weights, cardio, weights, cardio, abs, stretching/cool down. The weights sections include cardio as well, but focused on strength training.

The thing I loved about the workout was that it was actually kind of dancey, and it was super fast-paced. I get really bored with repetitive workouts, but this one was great because she never slowed down to show you the movements; you had to just pick it up as you went along. For that reason, I think it would be too fast-paced for a non-dancer! Although people who are used to fast-paced aerobics would probably be fine as well.

In each section, she has 2-3 series of combinations that start simple and become more complex (i.e.- one starts as a lunge, then adds a punch, then adds a crunch, then adds a kick). Then you repeat the series a few times, faster and with all the add-ons. Then you do the other side, starting simple and then adding everything else on. But even though it starts with simple movements, she never slows down, and you have to be pretty quick to pick up on the movements, which I would even go so far as to call calesthenic choreography.

Anyway, I am beginning an exercise/diet plan tomorrow (my six week postpartum period ends then!), but I got a jump start on it today! I’ll describe my plan in my next post!

Some of my meals