Last week I posted my trip report for the first half of our Disney trip, our day at California Adventure. Before that I posted how we surprised our kids with the trip. Today I’ll be finishing up with details about our day at Disneyland!

Friday morning we all got up, got ready, and headed around the corner to the Mickey & Friends parking garage where we caught the tram to the main gate. Vanessa was all dressed up in her Anna dress and ready to meet her Frozen friends! 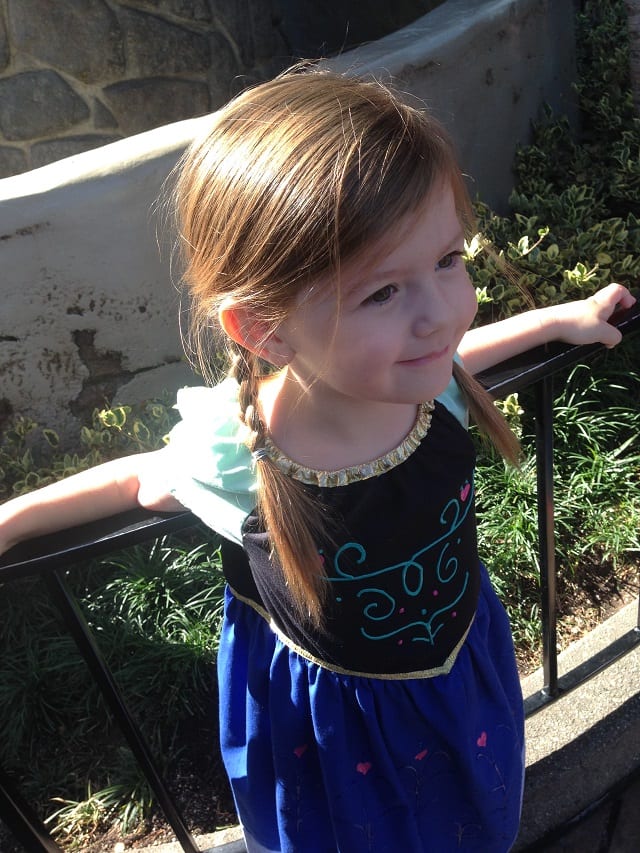 The plan was to go straight to the line for Frozen Meet & Greet return tickets, so that’s just what we did. The line started at the end of Main Street and was already quite long by the time we joined it. Before the park opened (at 9am), they led the line back around Sleeping Beauty’s Castle and into Fantasyland to get into the queue by the Frozen Meet & Greet. At 9, they started handing out tickets to come back and see Anna and Elsa. We didn’t have to wait long, and we got tickets to return at 11:20.

As soon as we had our tickets in hand (and it was good we did that first, because they ran out of return tickets within the first hour, and you are not allowed to wait in line to see them without a ticket) we headed straight for Peter Pan’s Flight. This is a ride we’ve skipped the past few visits, because the line is always long. Since we did it early, the wait wasn’t too bad, and the kids loved it.

We decided to skip most of the Fantasyland rides because the kids have ridden them before, so we headed over to Tomorrowland and hit Star Tours and Space Mountain. Vanessa was tall enough for Space Mountain but didn’t want to ride, so we did a rider switch, and Daniel took Carter and then I took Carter.

After that it was time to go back for our Frozen Meet & Greet. We joined the queue and waited a bit in line for our turn. Vanessa and Carter (and Harry) met Anna on our last visit, but this was the first time they saw Elsa. We let Vanessa talk to them and hug them first, and then we got some pictures with Carter too. 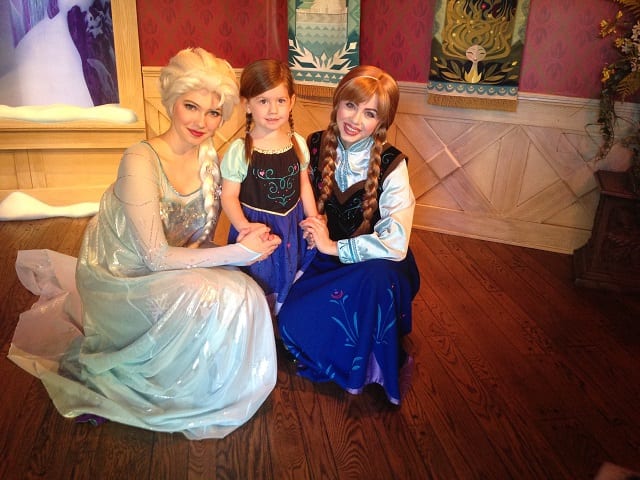 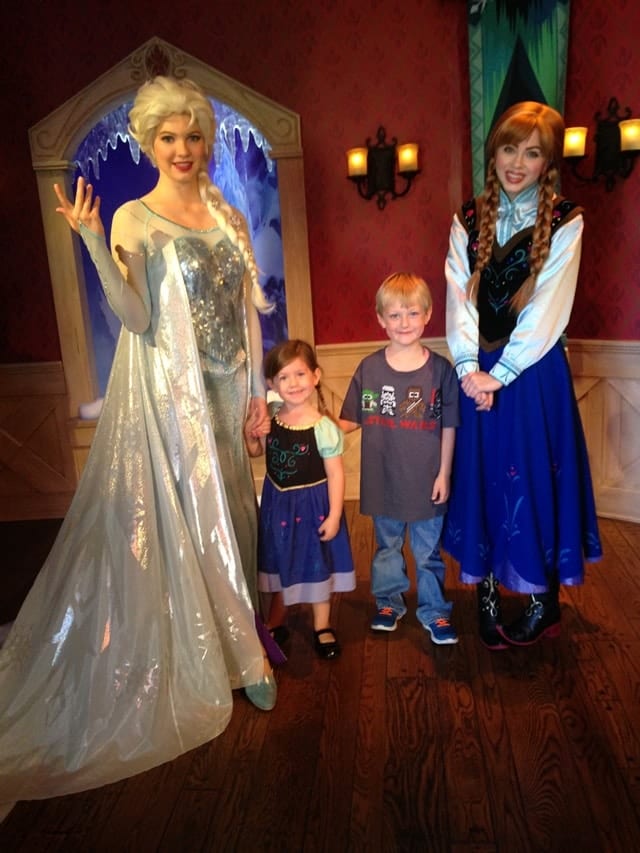 We said goodbye to the Frozen Princesses and exited into the Village Haus restaurant. We were all hungry, so we got some burgers and ate! Oh, there were some delicious desserts too! 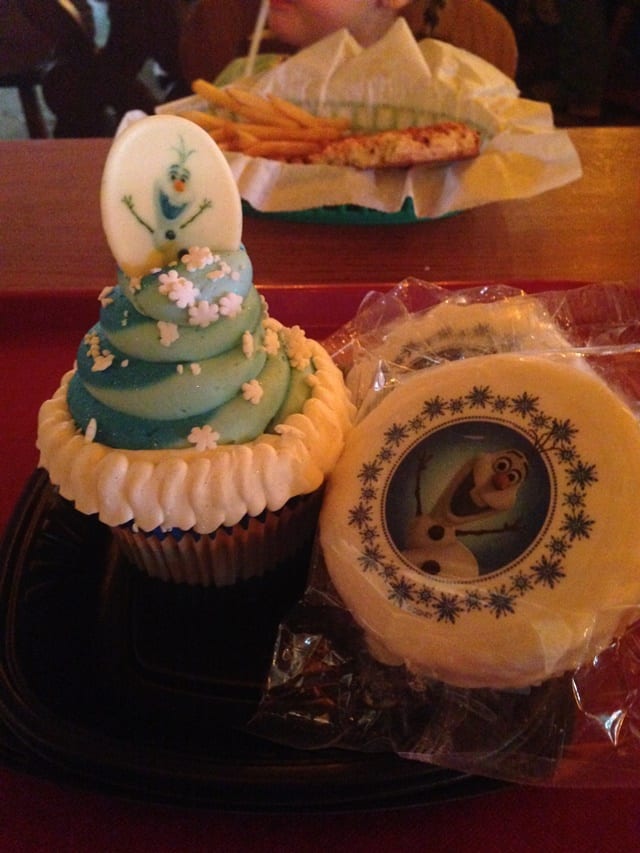 Daniel and I both really wanted to ride Indiana Jones on this trip, because I never have, so we went there next to get FastPasses. With those in hand, we headed over to the Haunted Mansion. On the way there we made a detour upwards, going through Tarzan’s Treehouse. 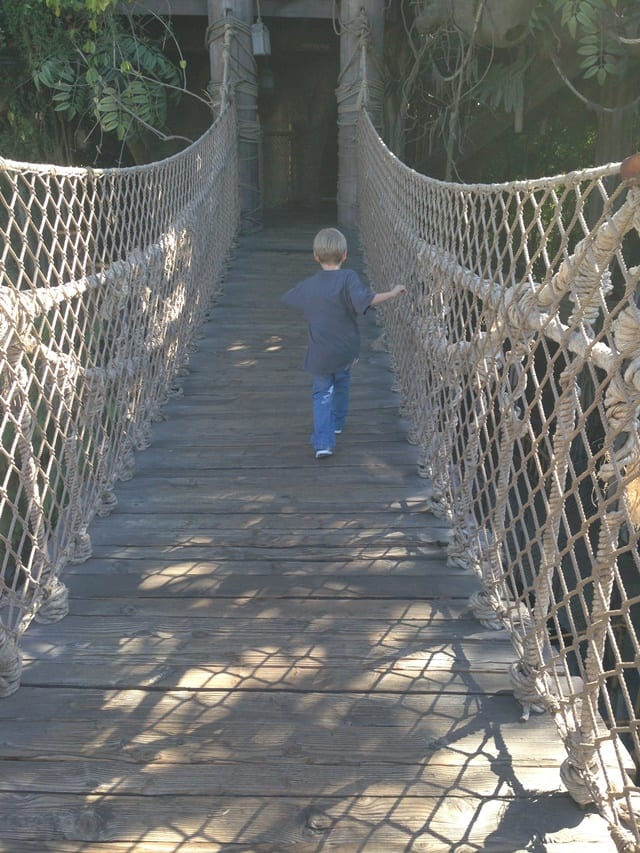 We were trying to hit rides that are changed for the holidays, so the Haunted Mansion was a “must do!” It’s totally done up “Nightmare Before Christmas” style. 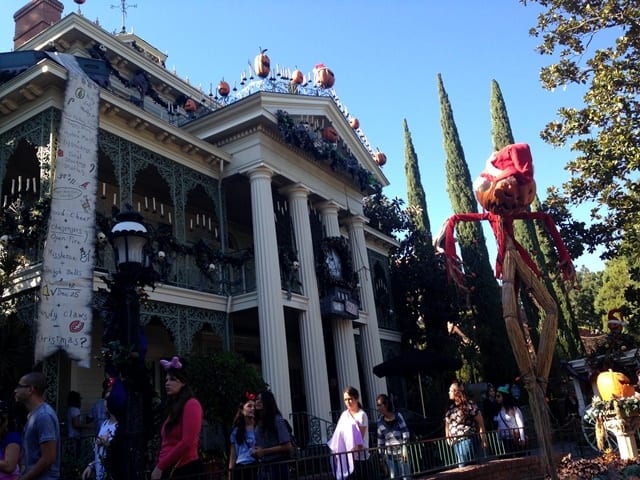 We were at the far side of the park, so we decided to do Winnie the Pooh and Splash Mountain while we were there. Can you believe that I’ve never been on Splash Mountain? After this trip, the list of rides I’ve never done is very short!

Carter braved Splash Mountain with me, while Daniel and Vanessa got some cotton candy. I was actually pretty scared on the ride because I wasn’t sure what to expect! Carter thought it was awesome and laughed so hard when he got wet.

After Splash Mountain, it was time to use our Indiana Jones FastPasses. Vanessa was too short for this one, so Daniel took Carter, and then I took Carter again. It was a really fun ride, and I especially liked the part with the big ball! I can’t wait to go back and ride that one again. 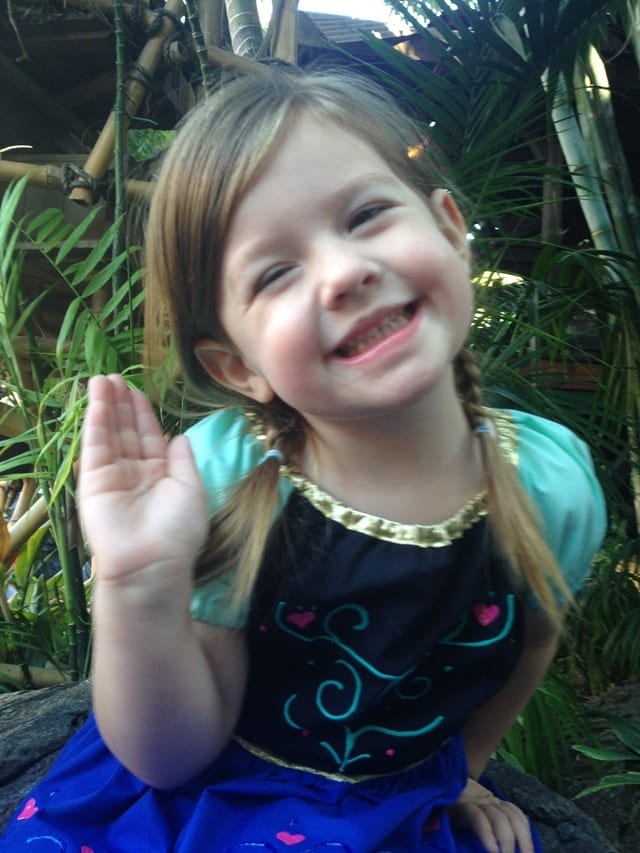 Waiting for the boys!

When we visited in March, Carter saw the Mickey and the Magical Map show, and he remembered that it was the show “with the spot.” He wanted to see it again, and Vanessa had slept through it on the last trip, so we saw that next. It was nice to sit down and be entertained for awhile. The show was excellent.

After the show we decided to split up. I wanted to take Vanessa to meet some princesses, and Daniel and Carter wanted to ride some more rides. So the boys went their way, and Vanessa and I went over to the Fantasy Faire.

Inside she met Ariel, Cinderella, and Tiana! We were excited because she’s never seen Tiana before. 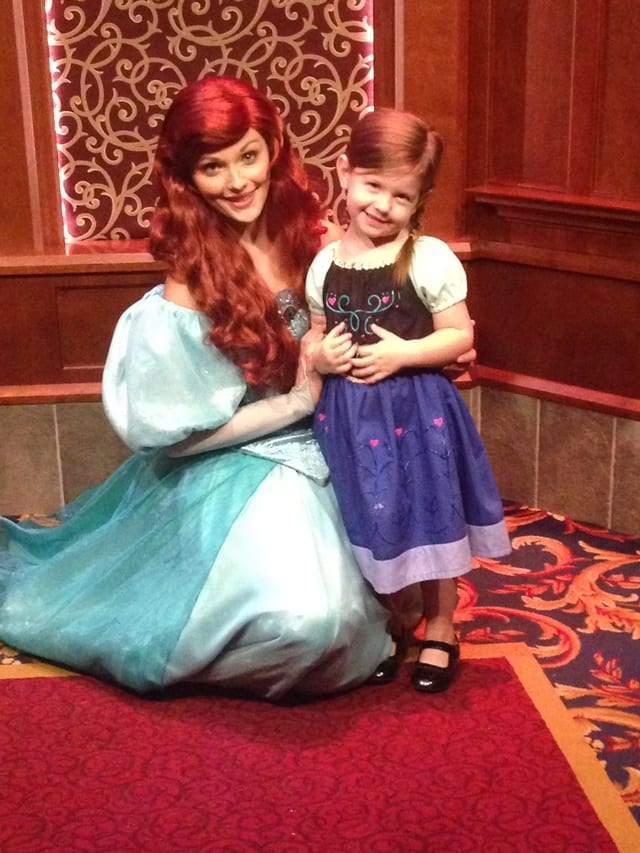 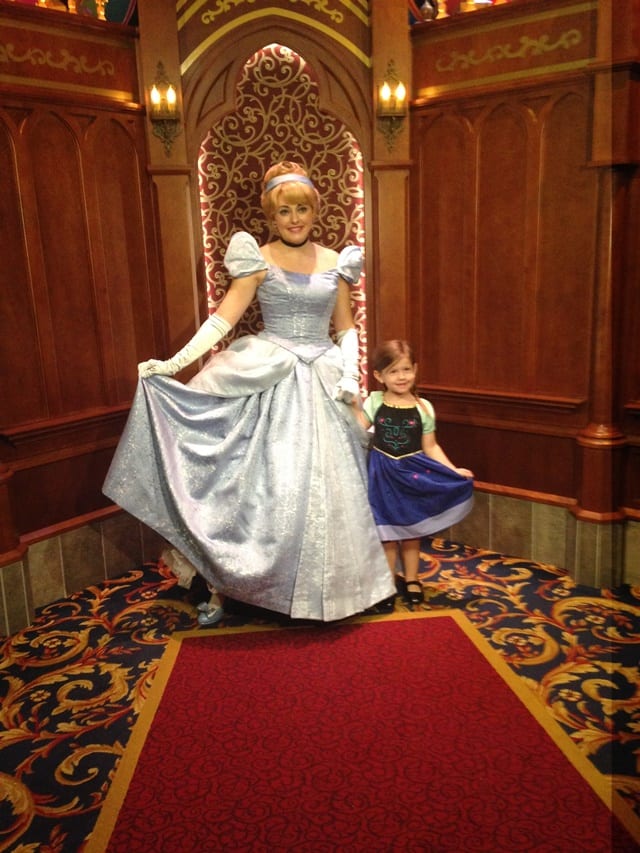 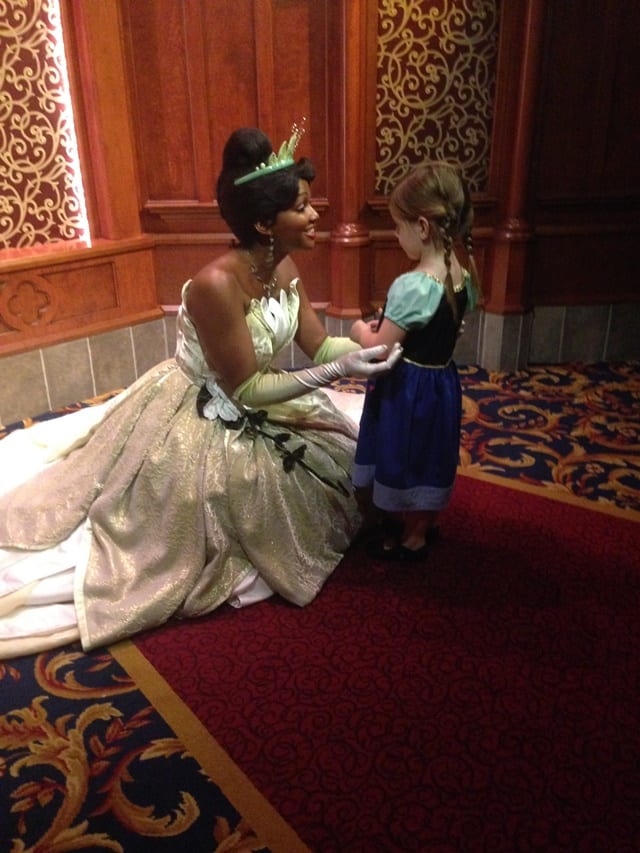 I wanted to see the last show of the day at the Royal Theatre, but we had a little bit of time, and Vanessa had wanted to ride the teacups, so we went back through the castle to ride the Mad Tea Party. 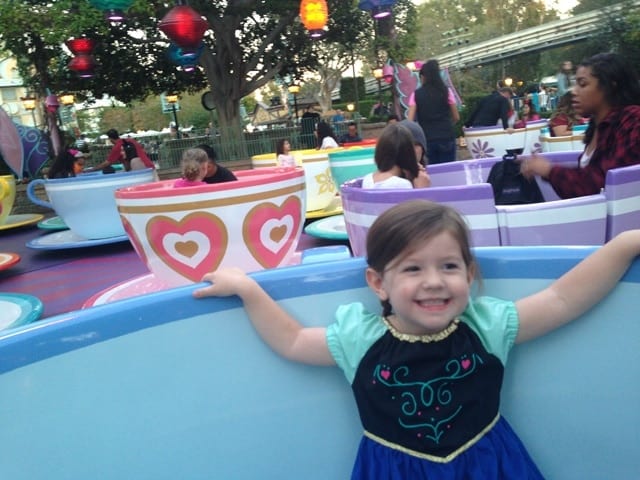 Then we got some seats at the Royal Theatre and watched their version of Beauty and the Beast. After that we bought a pretzel and managed to find a decent spot on Main Street to see the Christmas parade. I thought there was a pre-parade with the Frozen princesses, so I was a little disappointed when there wasn’t, but then they were on a float, and Elsa waved right at Vanessa (who was still wearing her Anna dress). Of course my phone had died by then so no photos! Luckily Daniel and I had arranged to meet on the castle drawbridge at 6:30, if we lost communication.

After the parade, I had just enough time to revisit our locker and get Vanessa dressed in warmer clothes before our rendezvous on the drawbridge. We also grabbed the snacks we had brought in our backpack. The boys hadn’t eaten since lunch, so they were happy to have them!

Daniel and Carter were thrilled because they got to ride a bunch of rides while on their own, including Pirates of the Caribbean, Big Thunder Mountain Railroad, Astro Blasters, and Astro Orbiter. They had also grabbed FastPasses for Star Tours, and it was time to use them, so we headed to Tomorrowland.

Vanessa didn’t want to do Star Tours, so Daniel and Carter went while I bought a couple of souvenirs. Then Carter and I used the other FastPasses to go again!

It was getting late, but the kids were still standing, so we decided to push on. We got in line for Finding Nemo, and that was probably our longest wait of the day, but Elvis was singing, so we grooved our way through the line. On the ride, Vanessa fell asleep! It was dark and the movement of the submarine rocked her right out. I put my arm around her and basically held her face so she could keep sleeping! Getting out was the hard part; I carried her up the very steep, very narrow staircase!

We hadn’t ridden the Railroad yet, so I suggested we take it from Tomorrowland to Toon Town, which was close to where we had left our stroller in Fantasyland, and also close to It’s a Small World which we wanted to ride. The timing worked out perfectly, as the fireworks were starting just as we got off the train, and It’s a Small World was a perfect place to see them. We watched while waiting in line and saw the end just as our boat entered the ride. 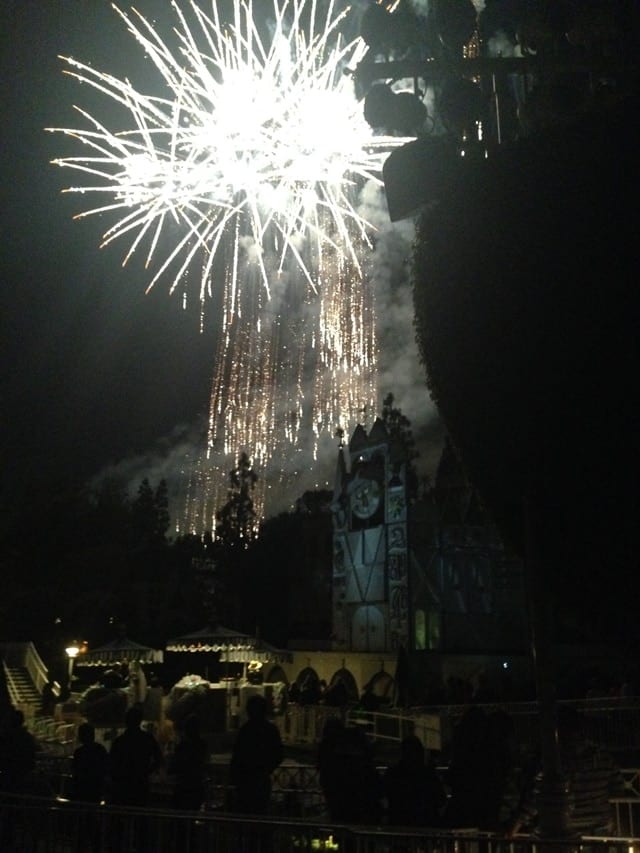 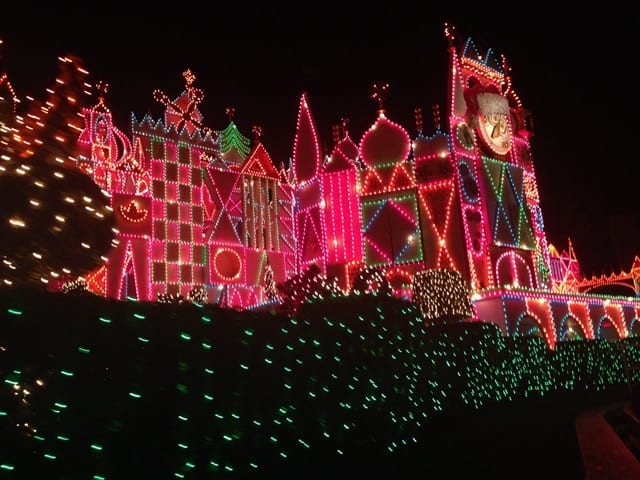 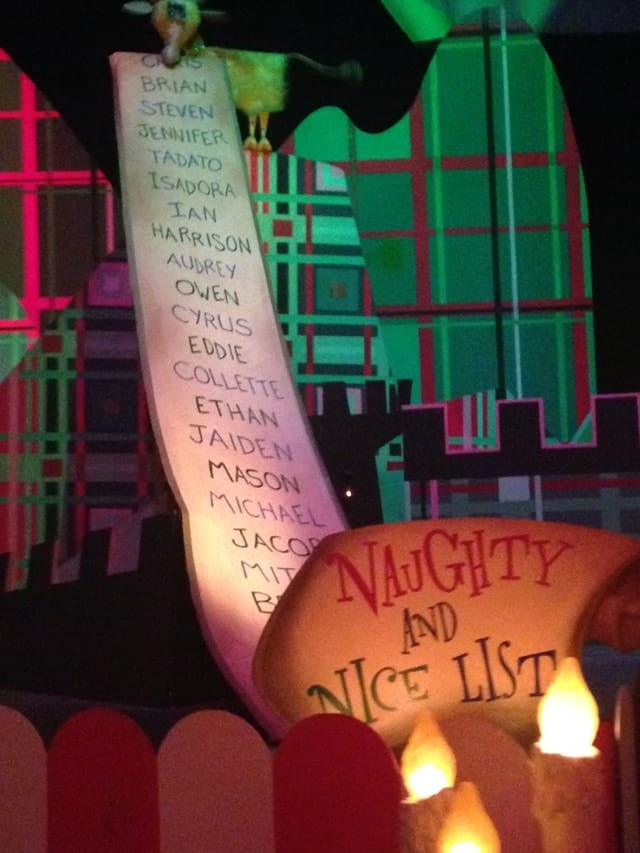 Look, Harrison is on the nice list! At least I hope that’s the “nice” part!

The park was open until 11, and the second Fantasmic show was at 10:30. After It’s a Small World, we put Vanessa in the stroller, and she slept for the rest of the time. We still hadn’t really eaten dinner, and Daniel and I had both been eyeing the bread bowls in passing, in New Orleans Square. That also happened to be the viewing spot for Fantasmic, so that’s where we went. We thought the bread bowl place might be closed, but it was open and doing good business! While Daniel and Carter waited in line, I strolled Vanessa over to the patio of one of the restaurants that was closed and scored a table with a pretty good view of the show. 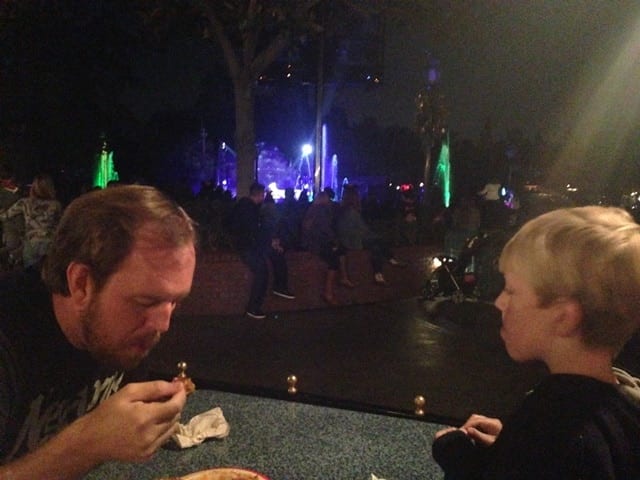 We ate the bread bowl, and then I left Daniel and Carter (with Vanessa) to watch the show while I ran over to Adventureland to grab a Dole Whip and a Dole Whip Float. I had been wanting one all day, and I wanted to get one before they closed. I brought them back, and Daniel and I shared them as the show finished. Carter had fallen asleep with his head on the table.

After Fantasmic ended, it was 11, so it was time to head out. Let me say a word about our stroller…

We barely used our stroller both days that we were in the parks. But at the end of both days, the stroller was desperately needed. Here was our solution at 11pm in Disneyland: 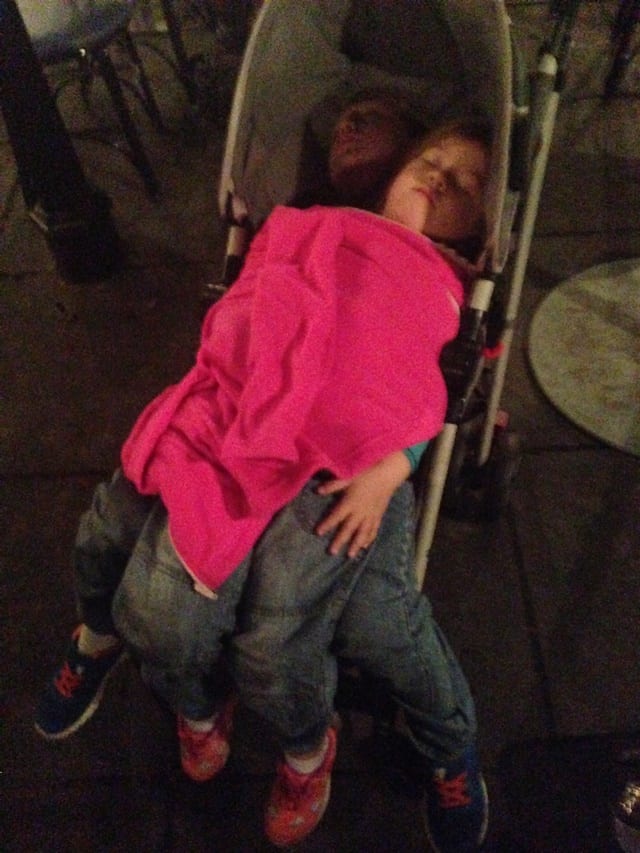 That’s how we got them to the trams, and then of course we had to wake them up and fold up the stroller for the tram ride. After that it wasn’t too hard to do the short walk from the parking garage to our hotel.

We had an absolutely fabulous time at the Disneyland Resort. We were fortunate to have been given media passes for Daniel and me for one of the days we spent there, and we felt like the trip as a whole was very affordable. With Disneyland being just a short 5-6 hour drive from Phoenix, it really is the perfect family vacation spot for us. We can’t wait for our next visit! 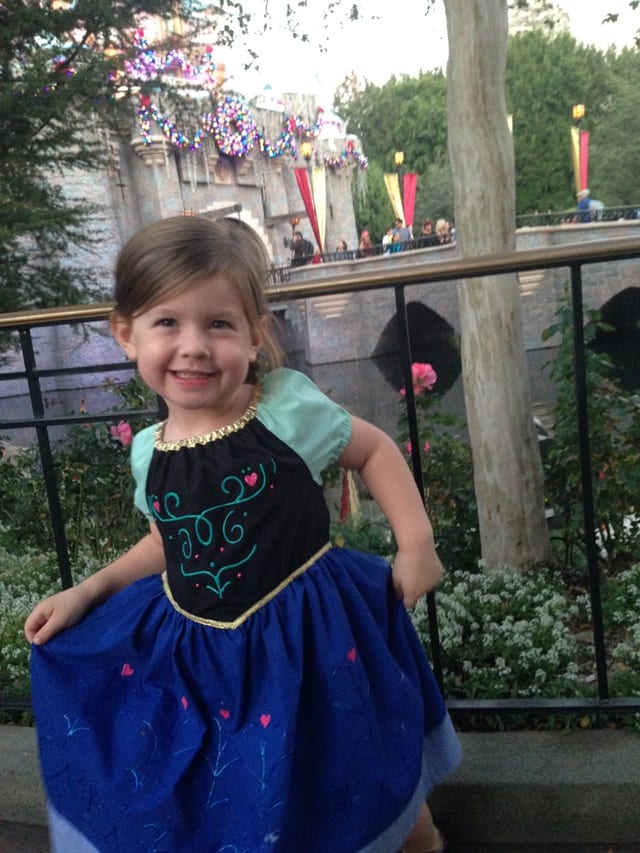 Find Your DSLR at Best Buy