It’s about time I wrote about our surprise Disney trip we took last month! After driving to Anaheim on Wednesday night (the week before Thanksgiving), we got up early on Thursday morning and prepared for a full day at California Adventure. Disney furnished my husband and me with media passes, so we just bought the kids’ tickets for the day. 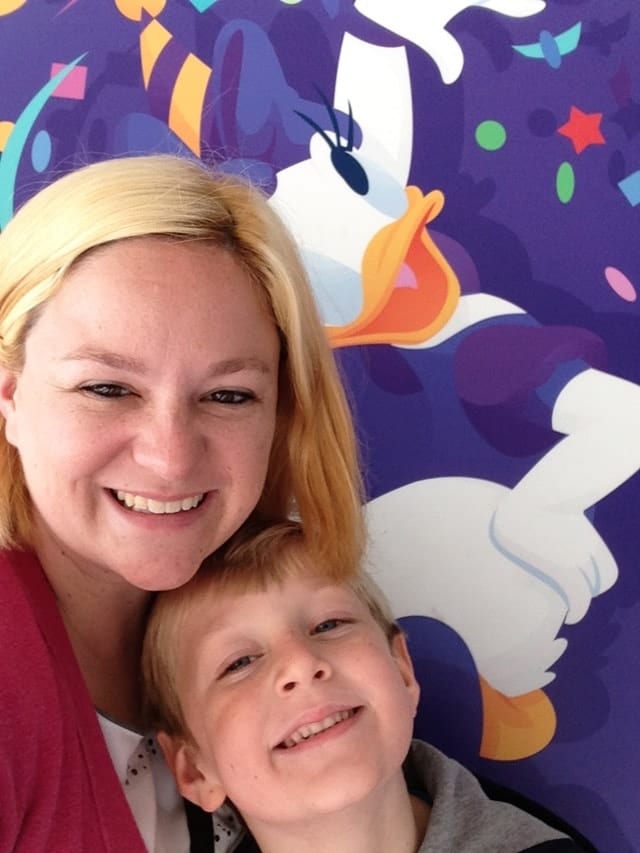 We stayed at the Days Inn, which was just a 5 minute walk from the Mickey and Friends parking garage, where we took the tram to the front gate. 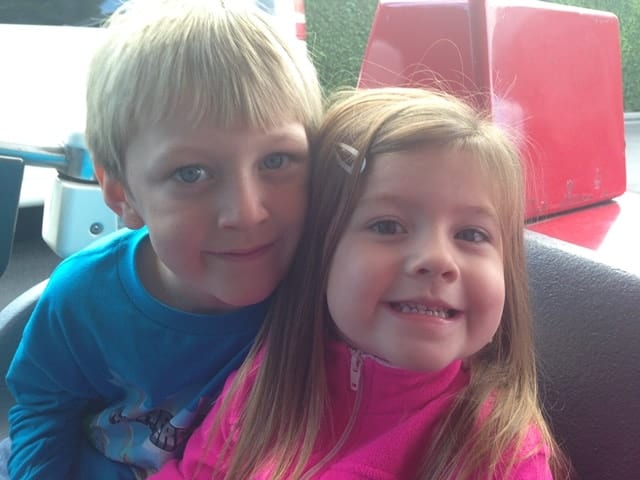 California Adventure was open from 10am-8pm that day, and we found out later that the crowd index was a 1! 30 minutes was the longest wait of the day, but we only waited about 5 minutes to ride most rides. It was fantastic and seeing the holiday decorations was a huge bonus! 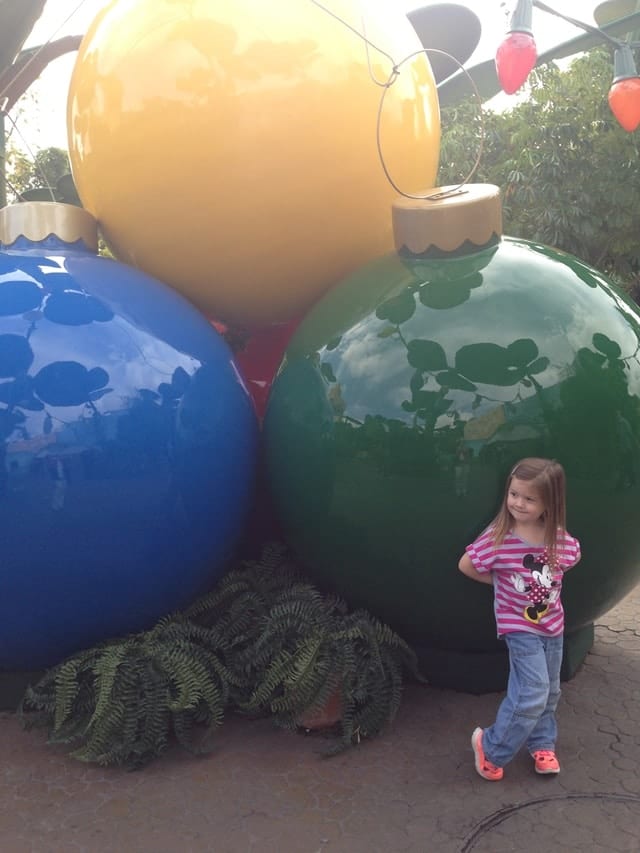 We sent Daniel to the FastPass line to get tickets for the Radiator Springs Racers, and Carter, Vanessa, and I headed for Cars Land and Mater’s Junkyard Jamboree. Daniel actually caught up with us in time to ride! 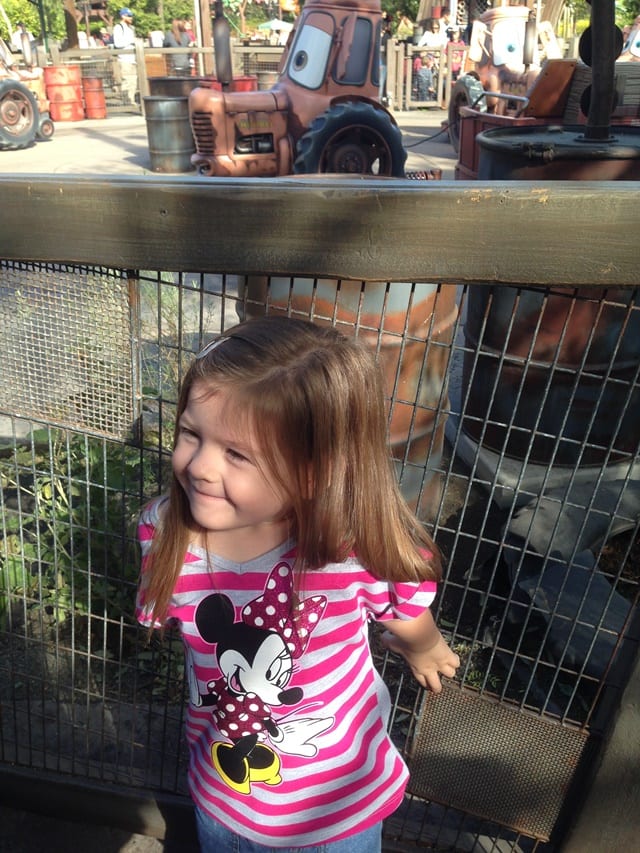 We parked the stroller in Cars Land and left it there for a good portion of the day. It was a lifesaver later in the evening, but Vanessa walked around all day like a champ, never complaining! 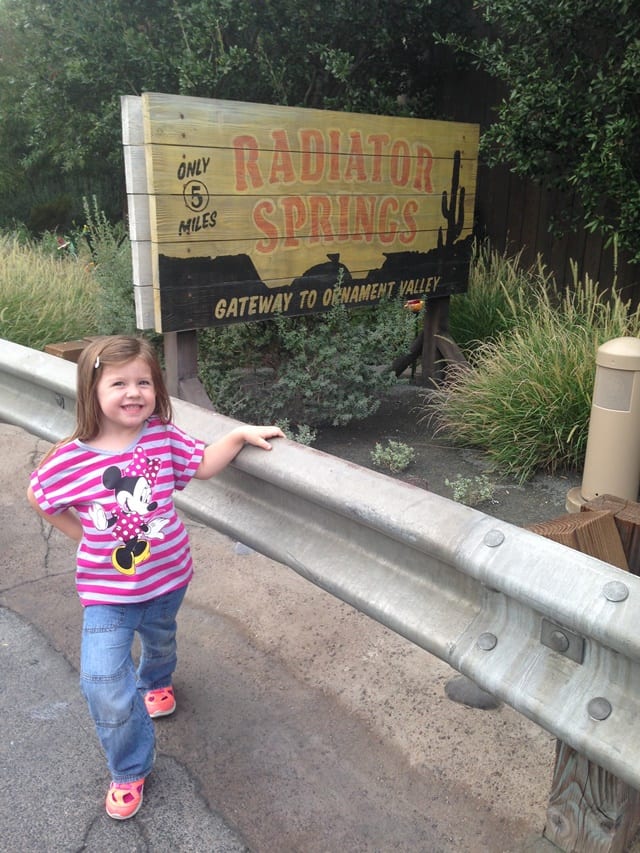 Daniel took Carter and Vanessa over to ride Luigi’s Flying Tires, while I took the park tickets and went to get FastPasses for World of Color (you can hold those passes along with any others). I got them and then met up with the family for a second round of the Flying Tires. Coming off the ride, we saw Red, the fire truck! 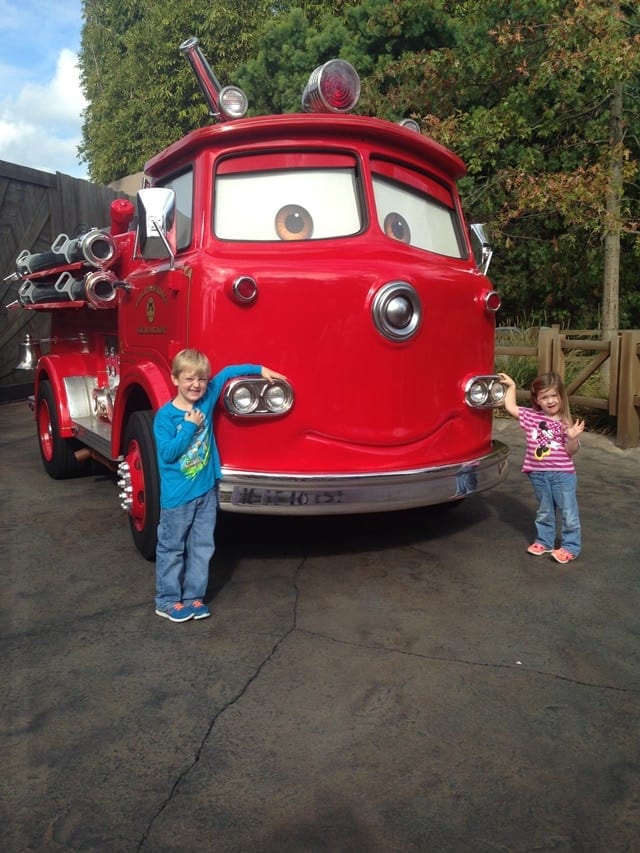 Then we had to go get a family photo taken by the Cars Land sign and the snow car. I didn’t care about getting too many family pictures taken, since we didn’t have Harrison with us, but this one came out so cute! 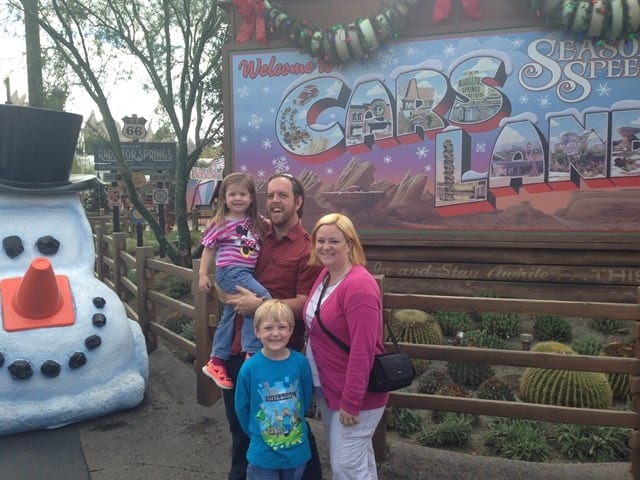 It was now time for our time slot for the Radiator Springs Racers, which meant we were also now eligible for another FastPass. So before heading over to the ride, I grabbed another round of Radiator Spring Racers FastPasses, good for mid-afternoon! Then we rode the Racers. This was Vanessa’s first time, and she was just barely over the height requirement.

We had the car all to ourselves, with Daniel and Carter in front and Vanessa with me in the back. She loved it! And we won! 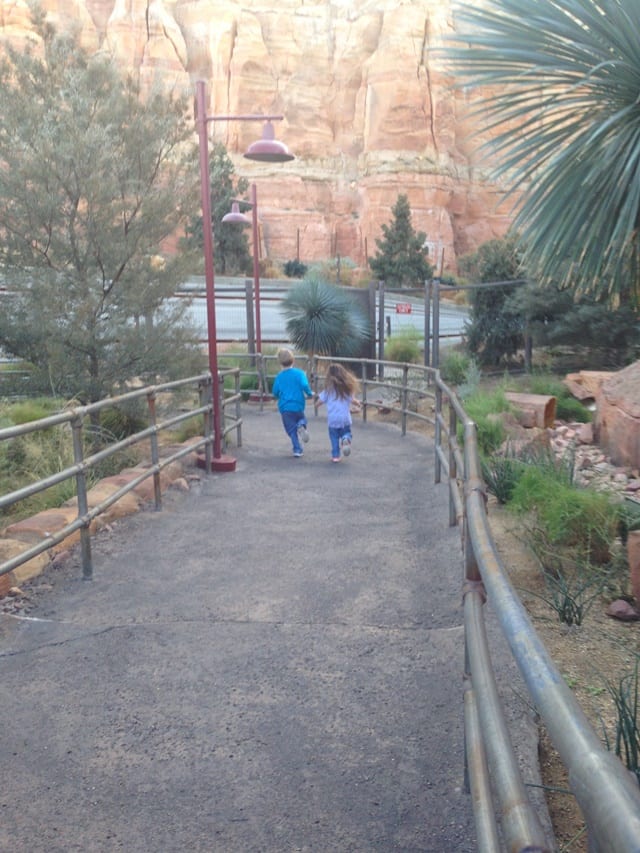 After the Racers, we were all more than ready for lunch. We headed over to Flo’s Cafe, got ourselves some sandwiches, and sat out back where we could watch the Racers race by. The crowds were small, the food was tasty, and the weather couldn’t have been better! 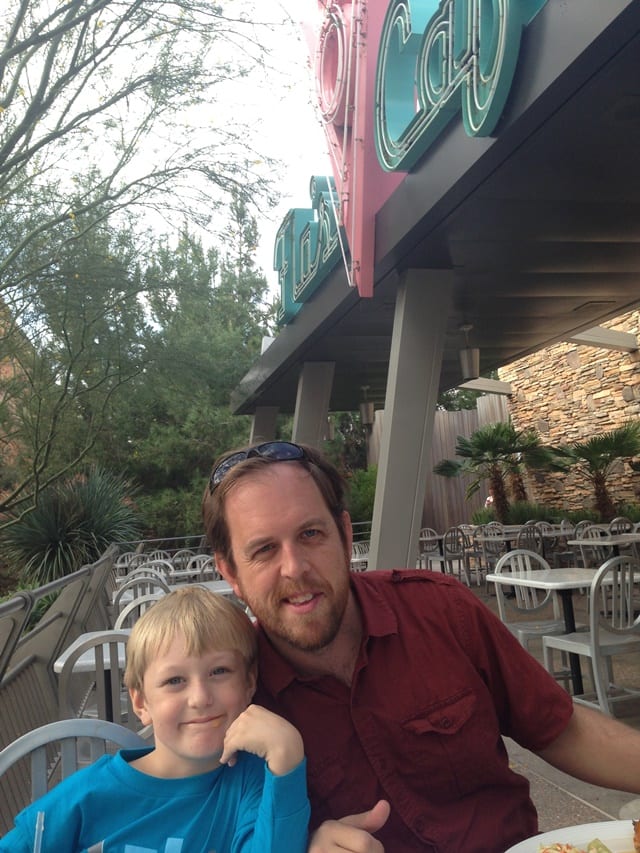 After exhausting the rides in Cars Land, we took a counter clockwise direction around the park and headed next to It’s a Bug’s Land, and we rode every ride there. Flik’s Flyers, the Chew Chew Train, Ladybug Boogie, the Drive ‘Em Buggies, and we watched the It’s Tough to be a Bug show. 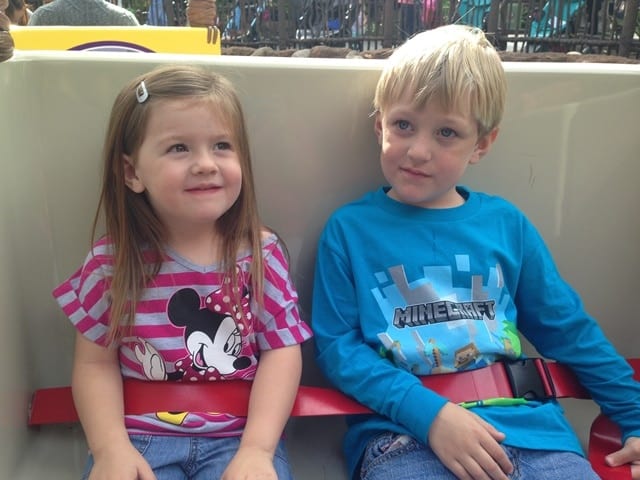 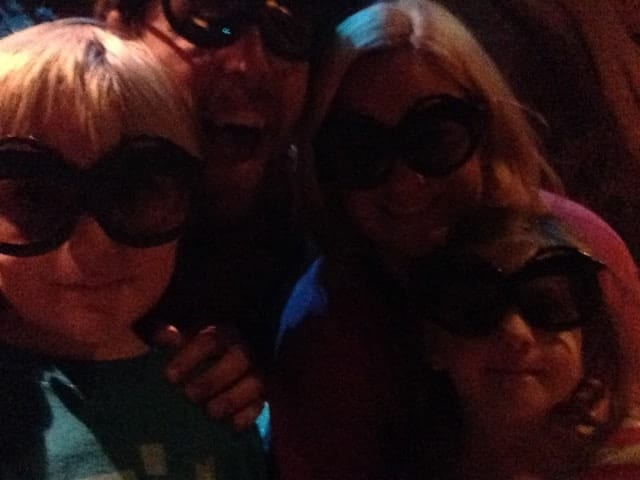 It’s Tough To Be A Bug

Next stop was Hollywood Land, and we saw a special someone on our way over! 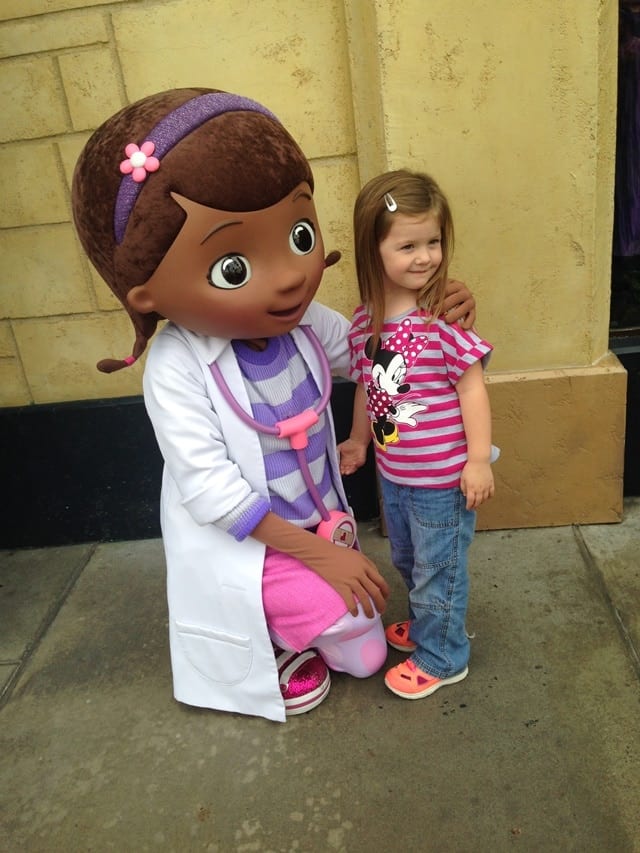 We wanted to catch the Disney Jr. show, but we had a little bit of time, so first we went to Turtle Talk with Crush. He swam in and immediately started talking to Carter! …and then me. And I got it all on video!


Now, ever since our last Disney visit, in March, Carter has been saying that he wanted to go on the Tower of Terror. But when it actually came time to go on, he changed his mind! We walked over there anyway, and he decided maybe he’d ride. Then I realized that Vanessa was tall enough to ride, and I asked her if she wanted to go on. She said yes, so we all went in! That might not have been the best parenting decision I’ve ever made, but hey, they survived!

We had just enough time to make it over to the Disney Jr. show and grabbed a spot in the back. Vanessa was totally transfixed the whole time, and Carter busied himself trying to get as many of the gold doubloons as possible (they fall from the ceiling, along with bubbles and confetti).

After the Disney Jr. show we had just two more things to do in Hollywood Land- ride the trolley and the Monsters, Inc. ride, so we did!

It was almost time to ride Radiator Springs Racers again, so we headed back to Cars Land. Before we hit the ride, Vanessa got to dance as part of DJ’s dance party! She rocked the step-touches.


Then we rode the Racers again. I’ve ridden that ride about 10 times now, and every single time I’ve been in the car that goes through the paint shop! Just once I’d like to see the tire shop! 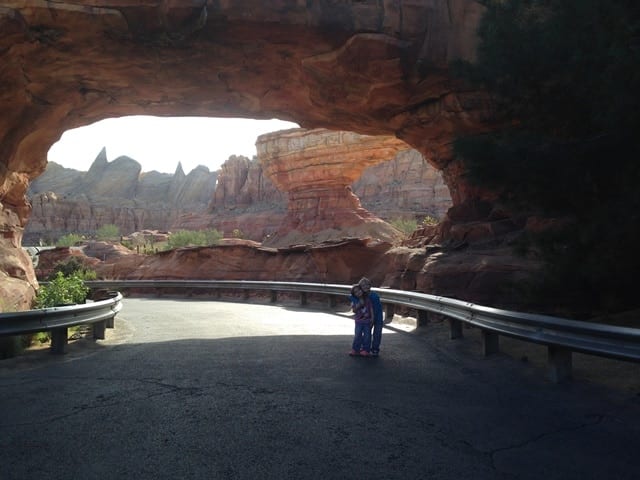 After the ride we were ready for a mid-afternoon snack, so we grabbed some root beer floats at the Cozy Cone. Here’s a frugal tip: the root beer floats only come in a keepsake cup, and they are pretty expensive, so instead we just ordered root beers and vanilla ice cream and combined them ourselves! 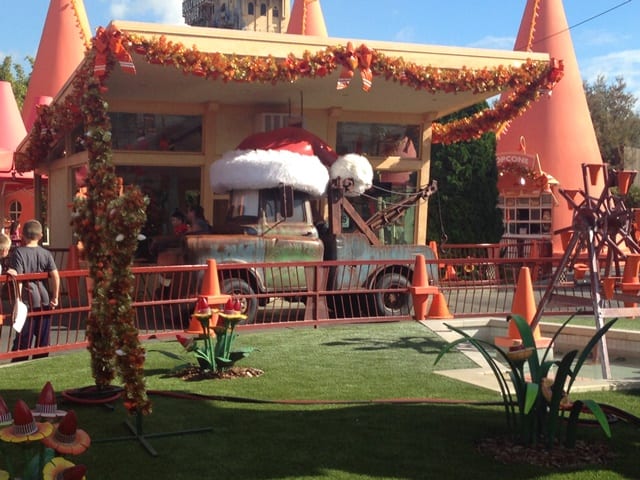 Now it was late afternoon, and we had done pretty much everything on one side of the park, so we grabbed our stroller and headed over to the other side. Our first stop was at Soarin Over California, in Condor Flats. This was high on my list of things to do, because I had never ridden it. We all went on and enjoyed it.

Afterward, I wanted to go find a spot to sit and watch the Pixar Play Parade. On the way, we passed the Challenge Creek Trail, and Carter decided he wanted to try that out. So Carter and Daniel went into the Challenge Trail, and Vanessa and I went to watch the parade, finding a spot on a bridge by Paradise Pier. The boys ended up meeting up with us just in time to see the parade! 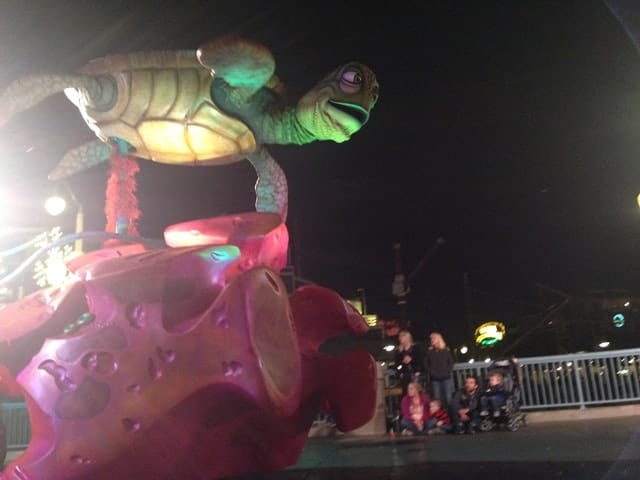 After the parade, it was full-on evening, and the only area we hadn’t explored was Paradise Pier. We did Toy Story Mania first, which was fun because it has interactive games (cough cough I beat Daniel cough). 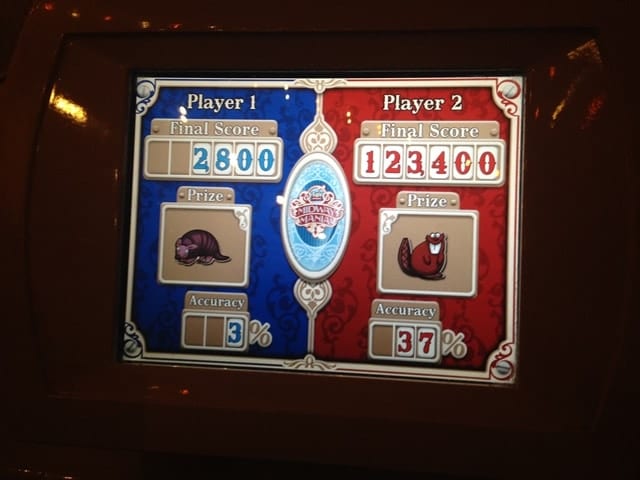 These scores are Vanessa’s and mine. She had a hard time controlling the slingshot, so I’m glad she got some points!

Then we did Mickey’s Fun Wheel, riding in one of the moving cages. Um, hello horrifying. I saw my death multiple times during that ride. Actually I want to ride it again sometime and go in a non-moving cage, because those actually go higher. 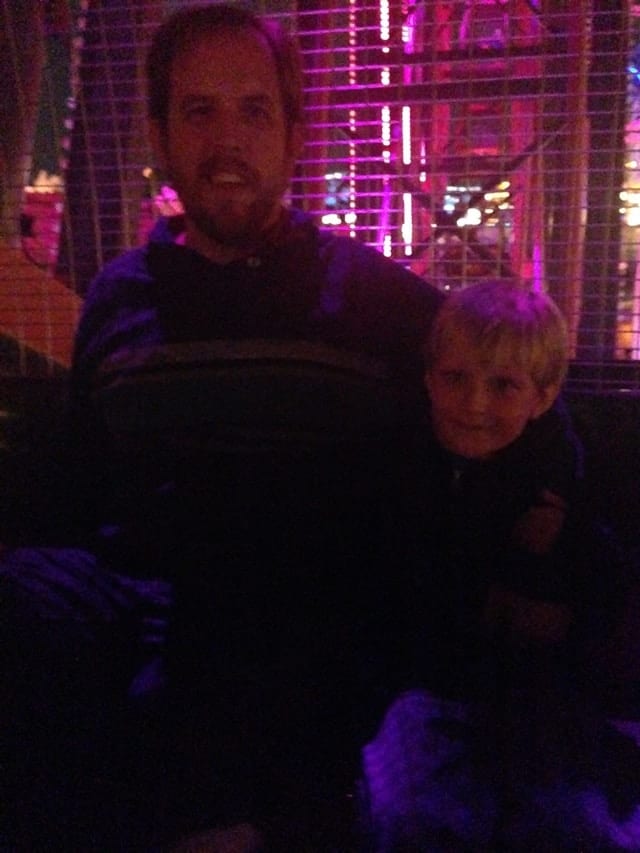 We had just a little bit of time left before we wanted to catch World of Color, so we hit a few rides that had no lines- the Golden Zephyr, The Little Mermaid, and Jumpin’ Jellyfish.

We were all hungry, so we grabbed some hot dogs, chips, and lemonade at a stand and ate them while we waited for World of Color to start. We had the FastPasses which got us into a premium viewing spot, but it wasn’t really worth it unless you were right up at the front. The kids couldn’t really see anything. They were starting to fade at that point anyway. It had been a long day! Carter fell asleep on my feet, and Daniel put Vanessa on his shoulders to see the show, but she started nodding off. As soon as the show ended, we got our stroller, took the tram back to the parking garage and walked to our hotel!

The kids went to bed right away, and we weren’t far behind them! The next day was Disneyland, which was open for 14 hours, and we intended to enjoy it to the fullest! 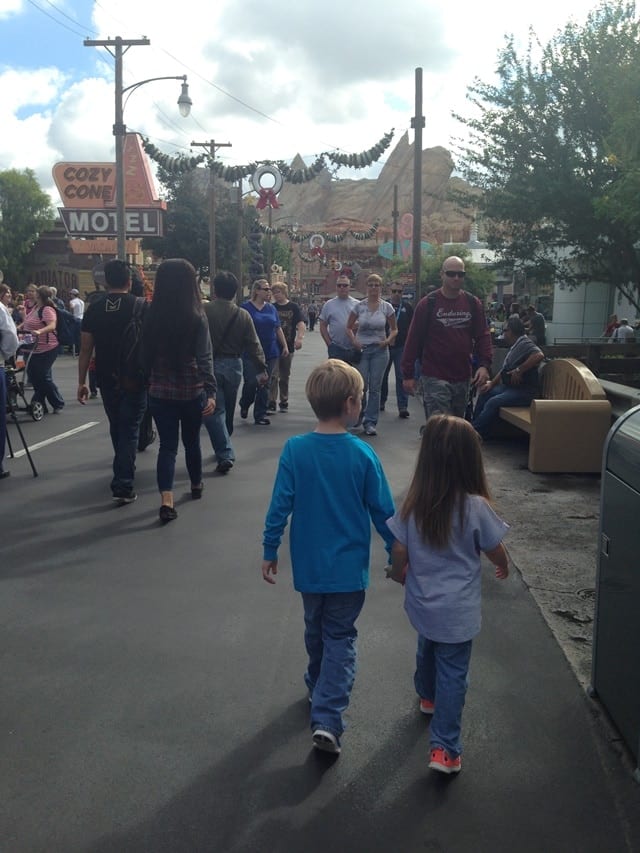 Give Your Man What He Really Wants For Christmas

[…] week I posted my trip report for the first half of our Disney trip, our day at California Adventure. Before that I posted how we surprised our kids with the trip. Today I’ll be finishing up […]