It’s been a summer of travel for us, and I just got back from a few days in NYC. My husband wanted to go to see NYMF shows, and I came along for a few days to do some touristy/NYC bucket list things that we haven’t done before. 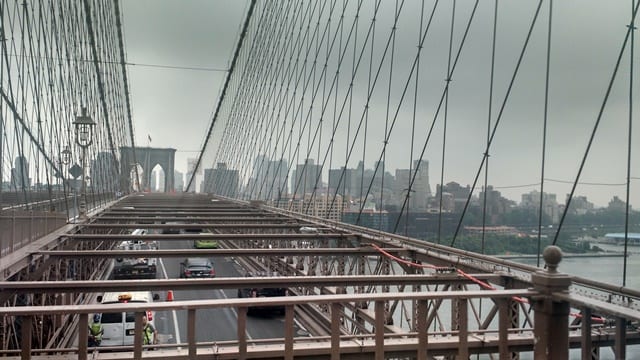 We left on Tuesday night on an overnight flight, and praise the heavens above, I ended up with a full row of seats to myself! We both got window seats thinking we’d be more comfortable and able to sleep, but I won the airplane seat lotto. #notarealthing Daniel was lucky too- no one in his middle seat. We both got some sleep and felt decently rested when we arrived in NYC at about 6:45am (3:45 AZ time!).

We headed straight for our hotel because even though it was too early to check in, we were able to leave our luggage with them. We stayed at the Manhattan Broadway Budget Hotel, which has a great location at 38th and 8th. It was perfect for the two of us- an economy-sized room that was just big enough for a double bed (may have been a queen), a small corner desk, and a private bathroom. There was a TV and air conditioning, and we were so tired at the end of the day that we slept hard.

After dropping our luggage, we grabbed some breakfast in a cafe and then took the subway across the river to Brooklyn. Our first task, walking the Brooklyn Bridge! 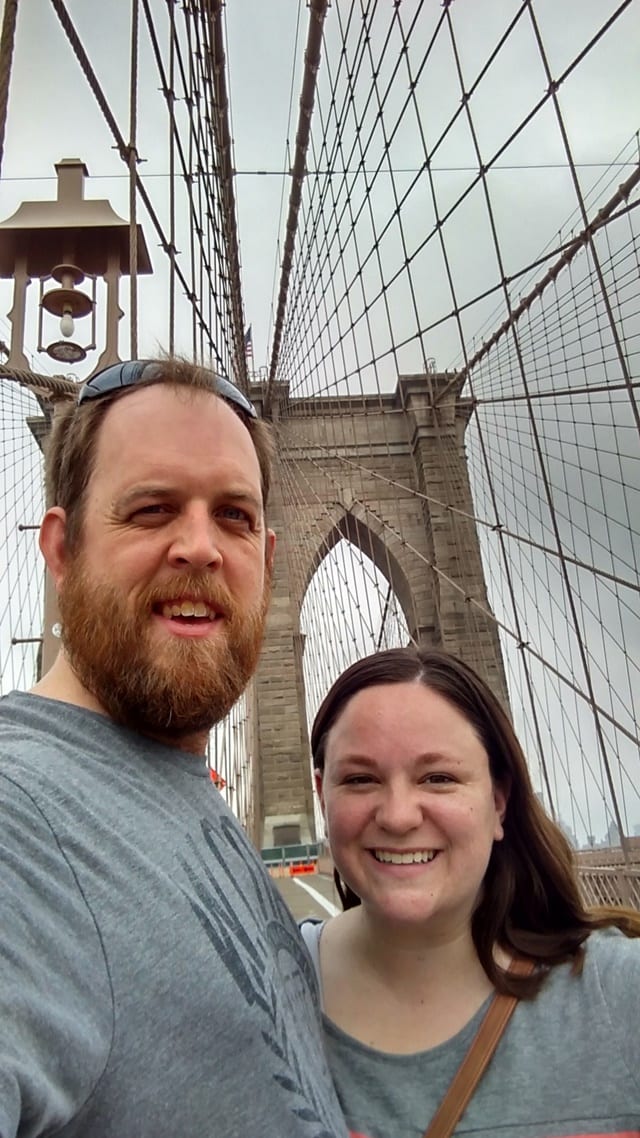 We crossed the bridge back to Manhattan, a nice little stroll. Daniel suggested we walk toward Manhattan rather than toward Brooklyn, because of the view of the skyline, which was smart.

Afterward we had plenty of time, and I suggested that we make the longer walk back uptown, rather than hopping back on the subway. The walk would have taken us through Greenwich Village, but before we got there, it started to rain pretty hard, so we got underground and took the subway the rest of the way to midtown. 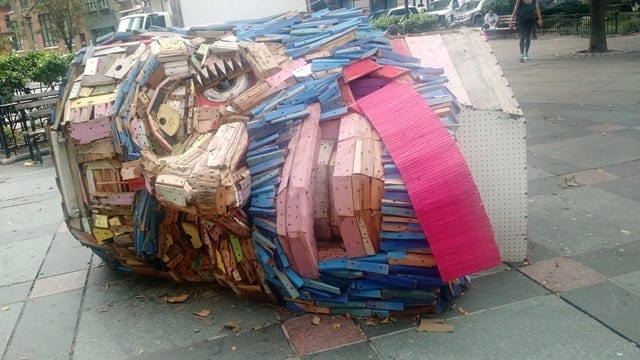 We had tickets to a matinee NYMF show, so we headed over to pick them up. NYMF is the New York Musical Theatre Festival, where new, original works are produced and performed. As a composer himself, Daniel was very interested in seeing as many shows as he could.

Before the show, we grabbed some hot dogs from a stand. We weren’t really hungry enough for a full meal, but we didn’t want to be hungry during the show. The hot dogs totally hit the spot! 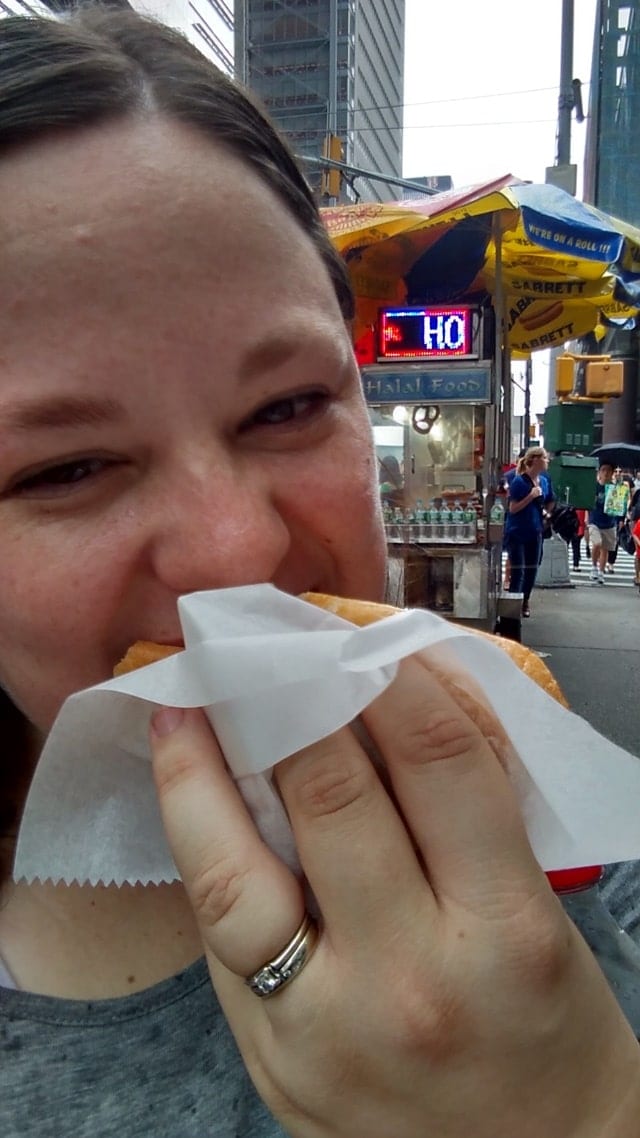 As for the show, it was fantastic. It was called Wearing Black, and was about a family and friends dealing with the death of a loved one. The music was outstanding, as was the singing!

After the show, we headed back to our hotel to check in. We had tickets for another show that night, and we definitely wanted to fit in a nap considering we only had about three hours of sleep on a plane the night before. We crashed for about an hour, and then got ready for the evening.

We had tickets for Sleep No More, which is a show based on MacBeth, but performed in a hotel, and danced rather than spoken. Confused yet?

The story is acted out through the characters movement, reactions and interactions with one another, as well as the props and ambiance in the hotel. Audience members wear masks and are not allowed to speak, but you are free to roam the several floors of the hotel and find what you may. I could go on at length, but the short story is that it was very cool and very unique.

Daniel and I ended up split up for most of the three hours we were in the Sleep No More hotel, so after it was over, we compared notes. I would really love to go again sometime, to see the scenes I missed, now that I have a better idea of how it all works.

On the way back to our hotel, we grabbed some desserts and talked about the show while we ate on our bed in our tiny room. Soon we crashed for the night and next thing I knew it was 9:45 the next morning!

For day #2, we had tickets for an 8pm show, and we planned on spending the first part of the day at the Metropolitan Museum of Art.  Daniel had visited the museum a few years back when he was there with a group of students, and he’s wanted to take me back ever since.

We had a little bit of a late start because we slept in, but we got to the museum at about 11am and stayed until about 3pm. We saw an authentic Egyptian temple, original Monets and Van Goghs, and we had fun discussing which artwork we liked. We also went up to the garden on the rooftop and admired the view of the skyline. 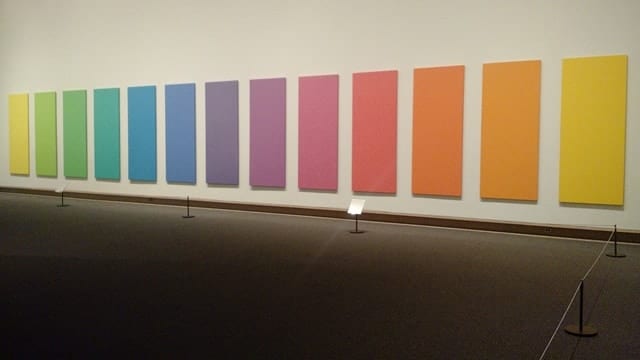 One of my favorites. It’s just so pleasing!

After wrapping things up at the museum, we started to walk back downtown through Central Park, and after a little bit of walking, we ubered the rest of the way into the theatre district and started looking for dinner.

Up until this point, we had just been eating from street carts and walk-up cafes, so we were ready to have a nice sit-down meal. Daniel let me pick, and I chose Bareburger, which we just found by walking down a street of restaurants. We both loved it! 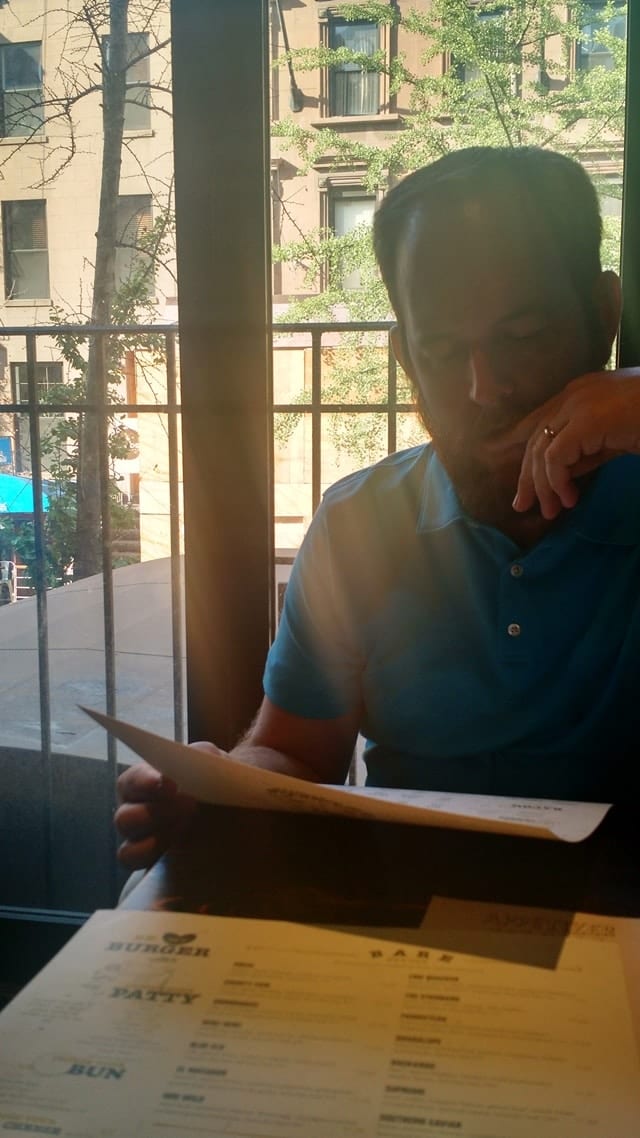 On our way to the show, who should we see but the Naked Cowboy. And of course I had mentioned to Daniel that I wanted to get my picture with him. So I did. 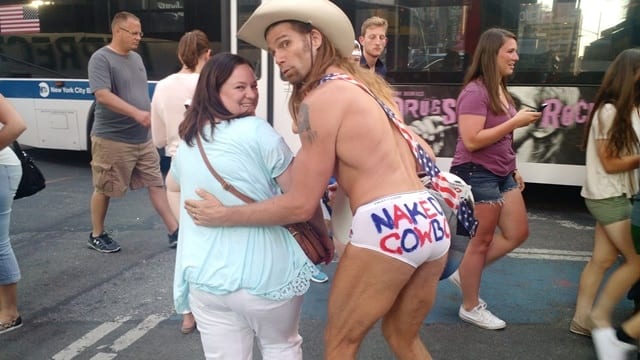 That night we saw another NYMF show, Summer Valley Fair, which was not as traditional as the one we saw the day before, but we were both rather captivated by it. It was…different, but in a good way. After it was over, we walked over to Times Square and sat on the TKTS steps to chat about it, then it was back to the hotel, exhausted after another busy day.

So those were our first two days in NYC. Three shows, a day at the museum, Brooklyn Bridge, Central Park, Times Square, and a naked guy with a guitar. We were busy!

Look for my “part two” post soon, about day #3, which we spent at Coney Island!

[…] Today I’m sharing part two of our recent trip to NYC. If you missed part one, check it out here: NYC Trip: Brooklyn Bridge and The Met. […]