A Day at LEGOLAND

When I attended Mom 2.0 in April, I had the opportunity to meet with a representative from LEGOLAND California Resort, who offered tickets for my family to visit the park. It just so happened that we were already planning a trip, so the timing was perfect, and on May 31st, we took LEGOLAND by storm! 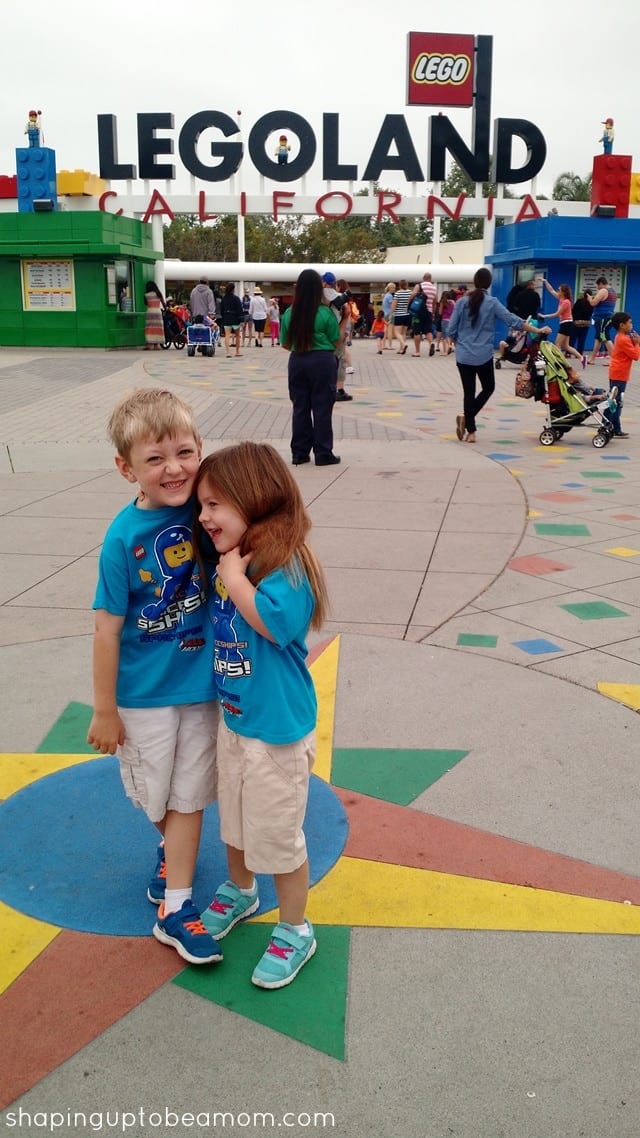 The kids were thrilled to find out we would be visiting the park, and we even did a LEGOLAND countdown as we waited for our trip. When the day came, we loaded up the troops and made our way to the land of awesome (because everything is awesome, didn’t you know?).

We had just one day at the park, since we had to return home that night, but if you’re planning a visit, I highly recommend two days. There were sections of the park we didn’t have time to visit, but a second day would have allowed us to hit all of the attractions, and probably to revisit favorites.

We had our littlest along, and since he was too small for a lot of rides, Daniel and I took turns riding with the older kids and waiting with Harrison. Luckily, some of the rides had waiting queues that surrounded LEGO play areas, which was perfect for wiggly kids. 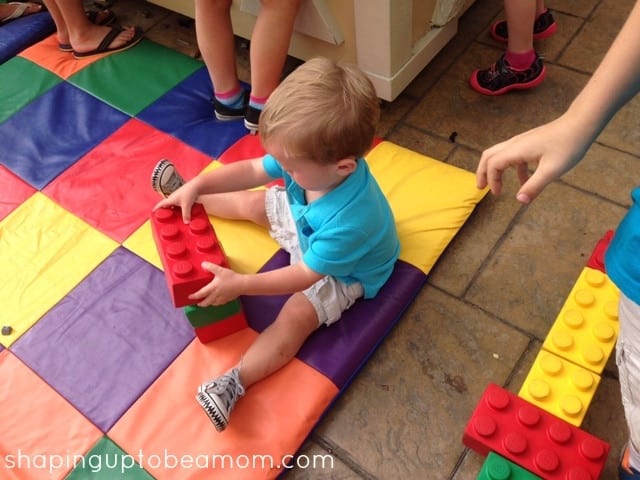 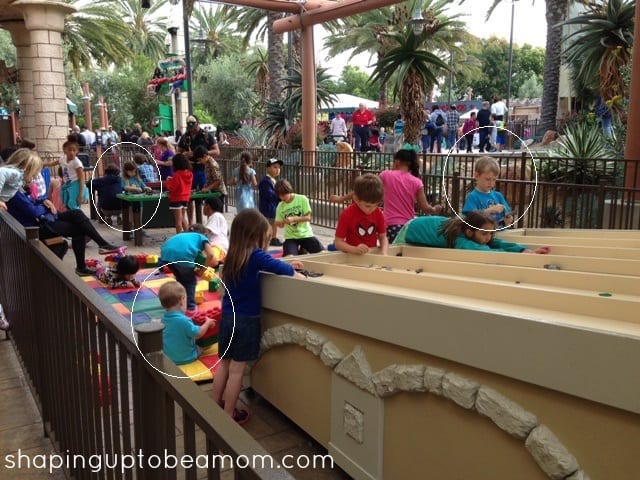 We also did several rider swaps, and the park employees were very helpful in assisting us.

As we entered the park, we headed left and skipped the first section, as many people were stopping there first. We went on ahead to find some shorter lines (although none of the lines were very long all day), and we found ourselves in the brand-new LEGO Friends Heartlake City! 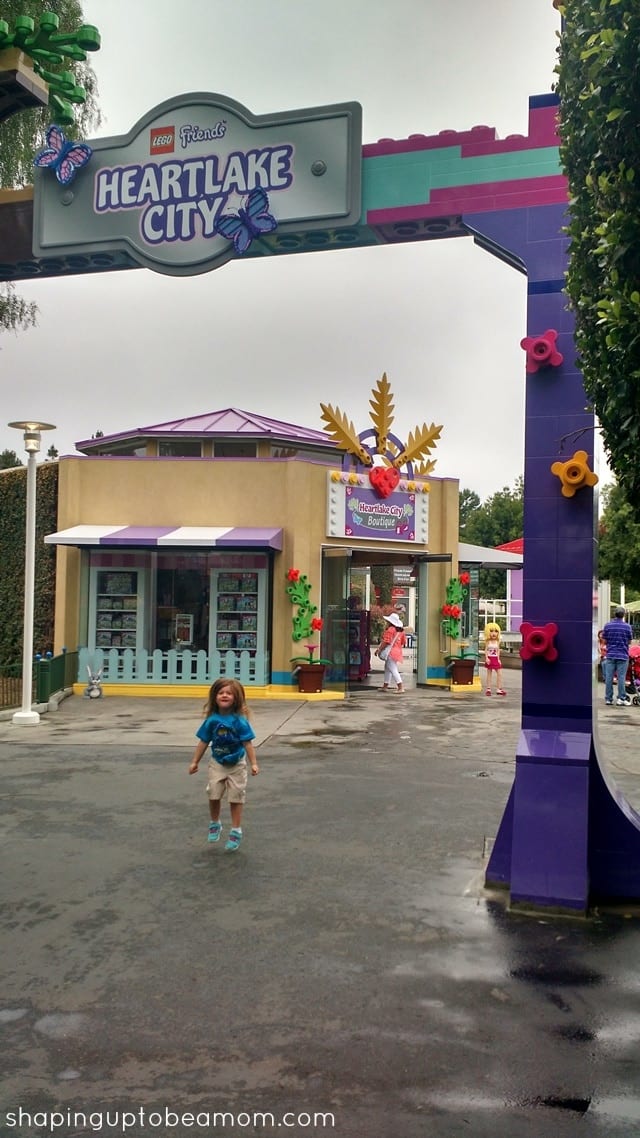 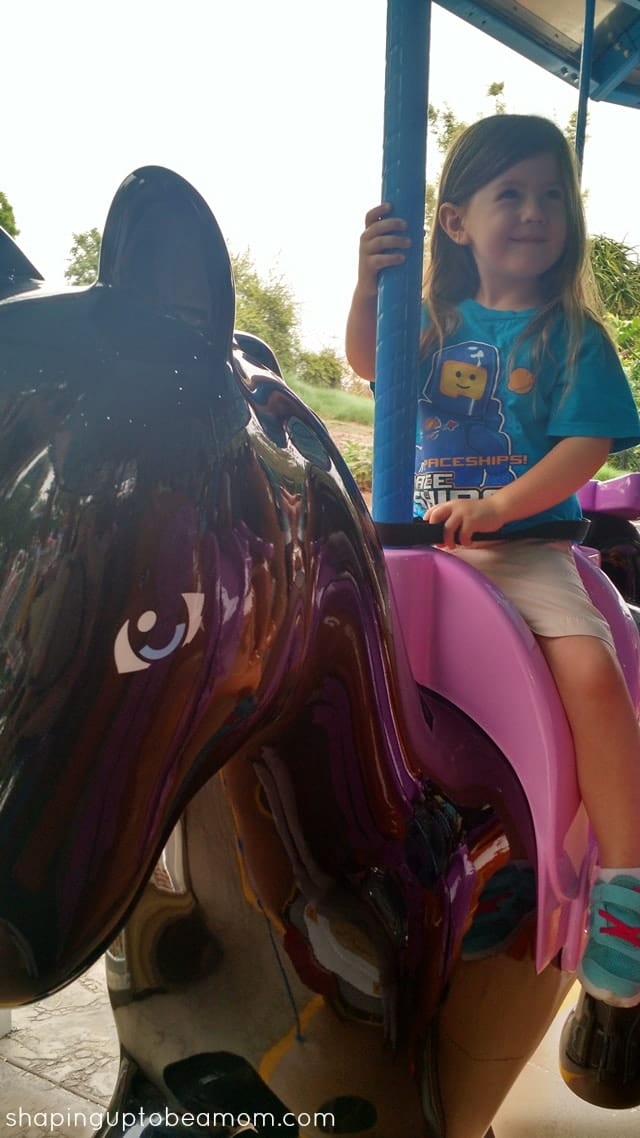 Then the kids found this cute LEGO kitty they all had to pet! 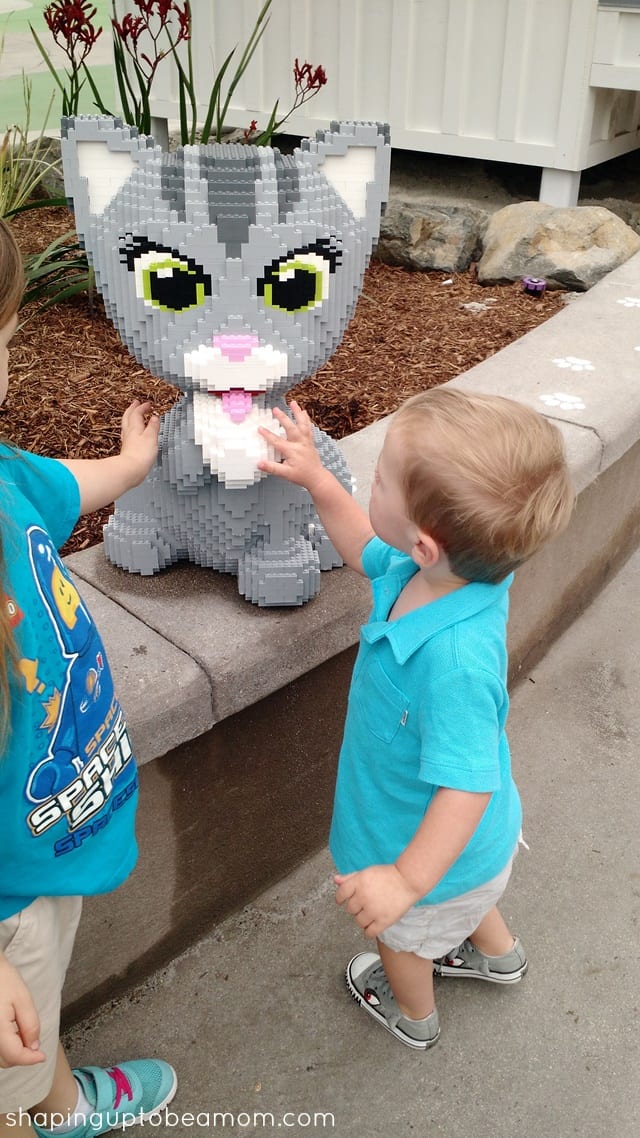 One of the awesome things that you can see at LEGOLAND right now is the movie set from The LEGO Movie! My kids are huge fans, so we had to check that out. 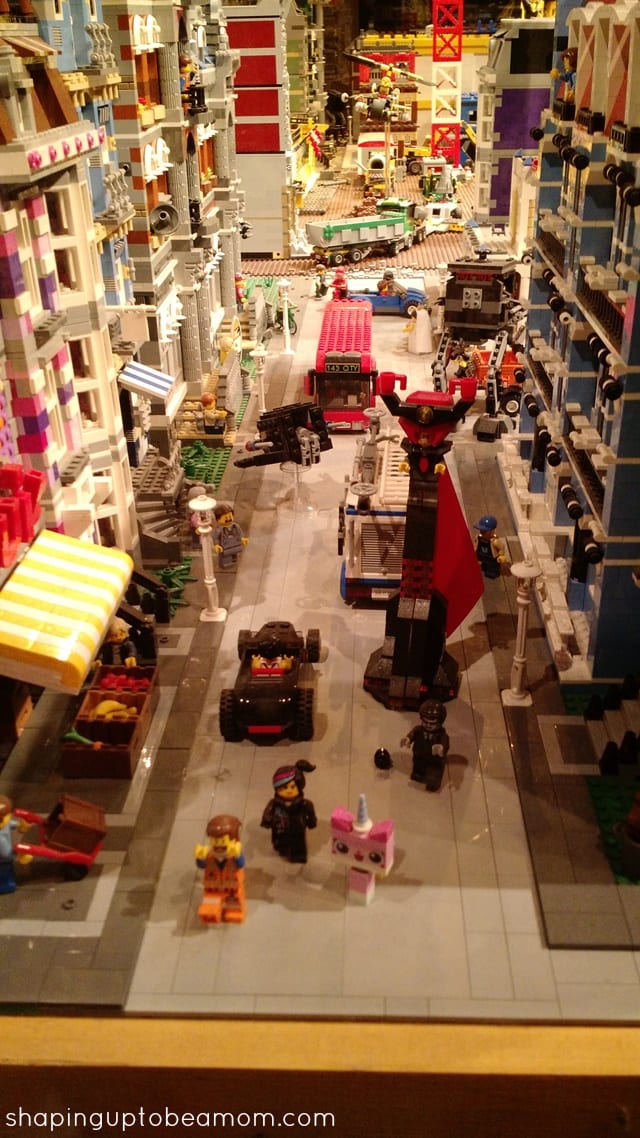 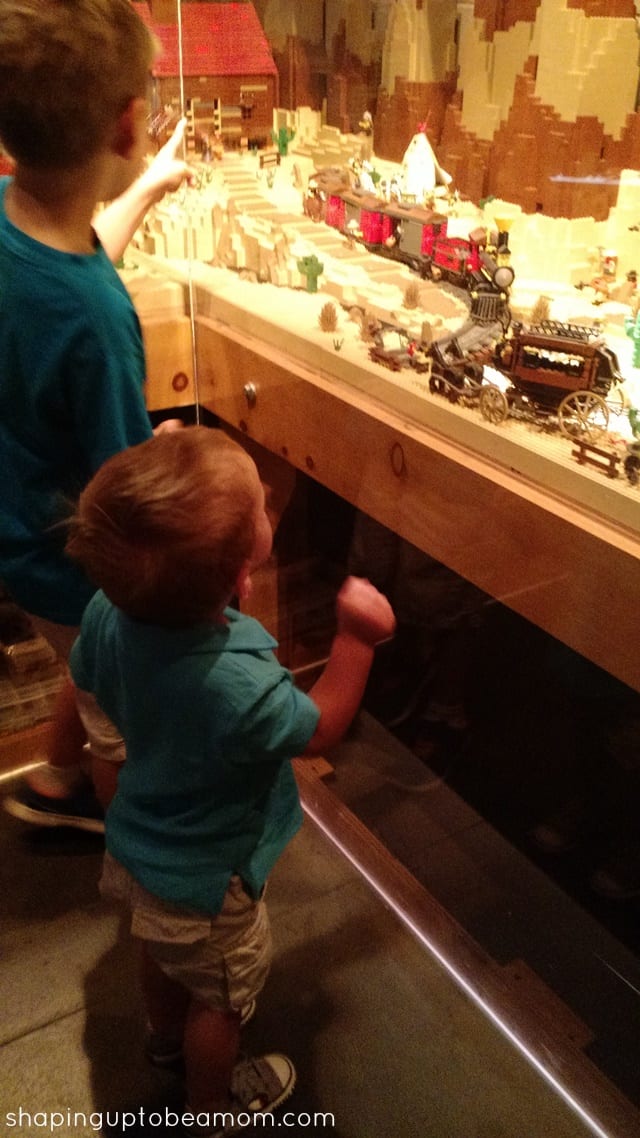 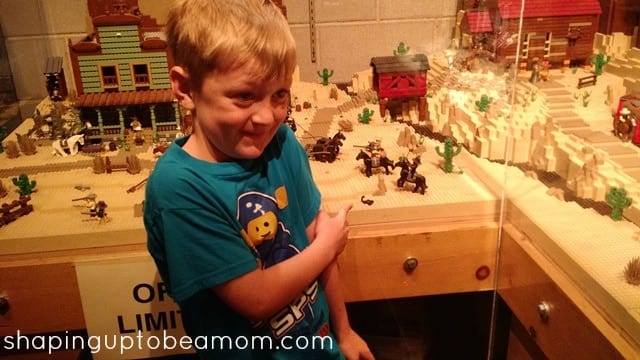 And Carter found a LEGO scorpion!

And we had to get a photo by Benny, since they were wearing Benny shirts! 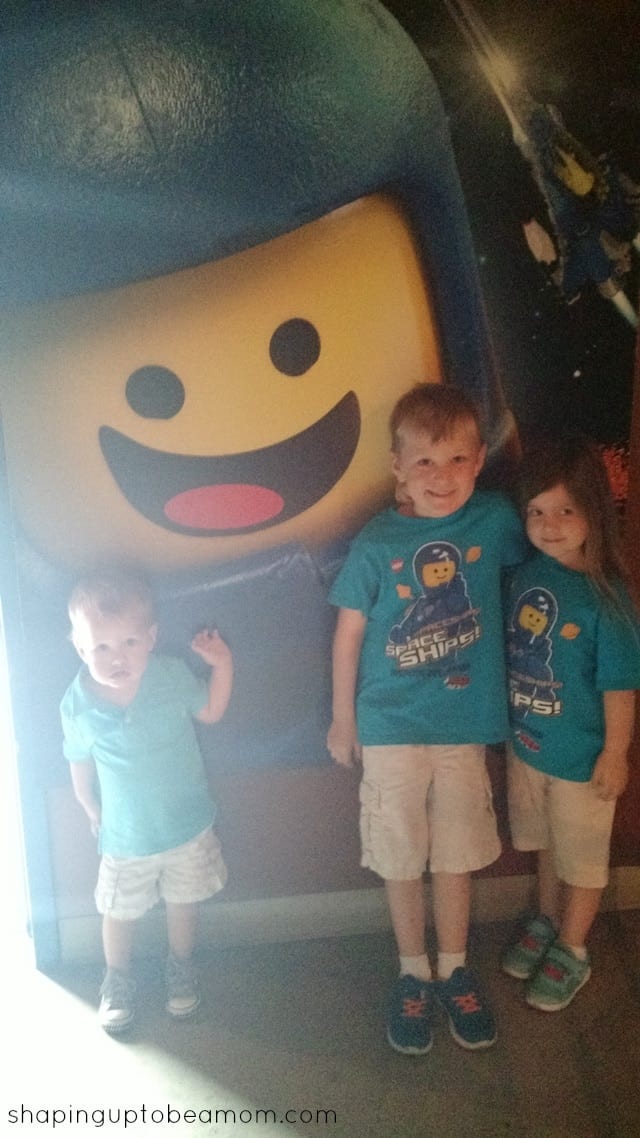 As we left the set, WyldStyle was outside, so we had to say hi! Harry went right up to her, touched her, and then ran away! A little while later we saw Emmett too! 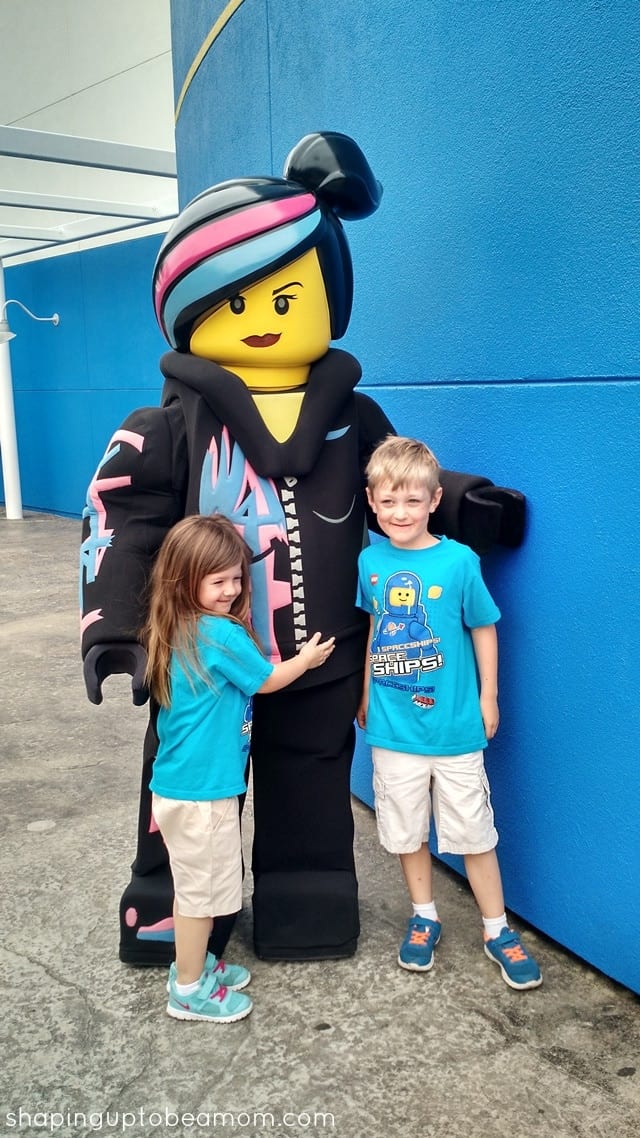 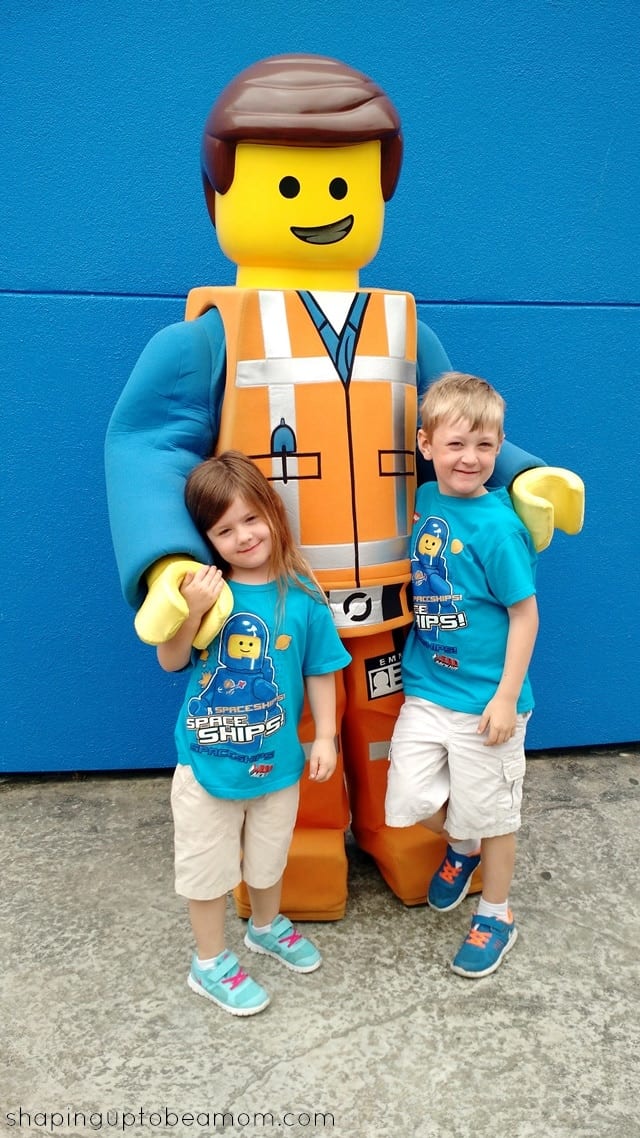 Next up, we ventured into Fun Town (which we find hilarious because Daniel and I met at a theme park called Funtown), and Carter did the Driving School. What a cute attraction- the kids get to drive all over just like mini adults!


Vanessa was the right age for the Junior Driving School, but she’ll need more practice before we let her near a real steering wheel!
After Driving School, we went back over to Heartlake City to catch the LEGO Friends show, but since we had some extra time, the kids played in the Duplo Playtown, and Harry (and I) rode the LEGOLAND Express. 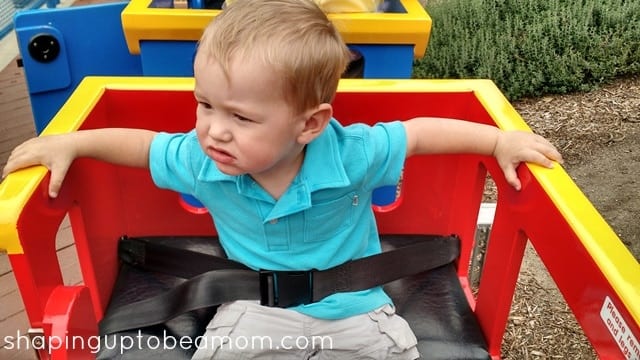 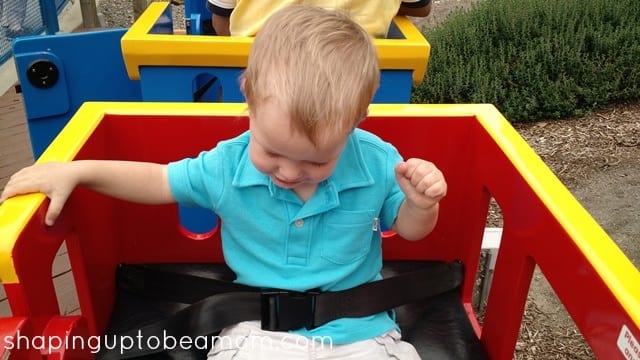 All three kids loved watching the LEGO Friends show, and it was nice to sit and relax for a few minutes. 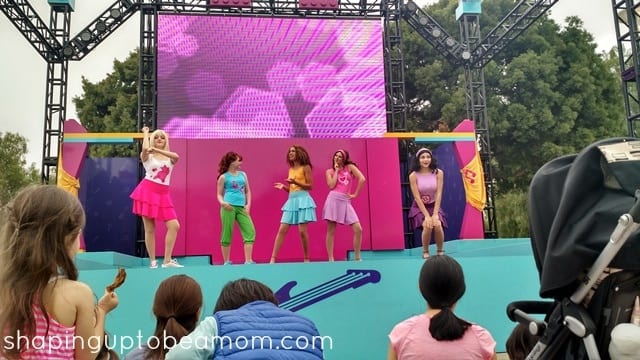 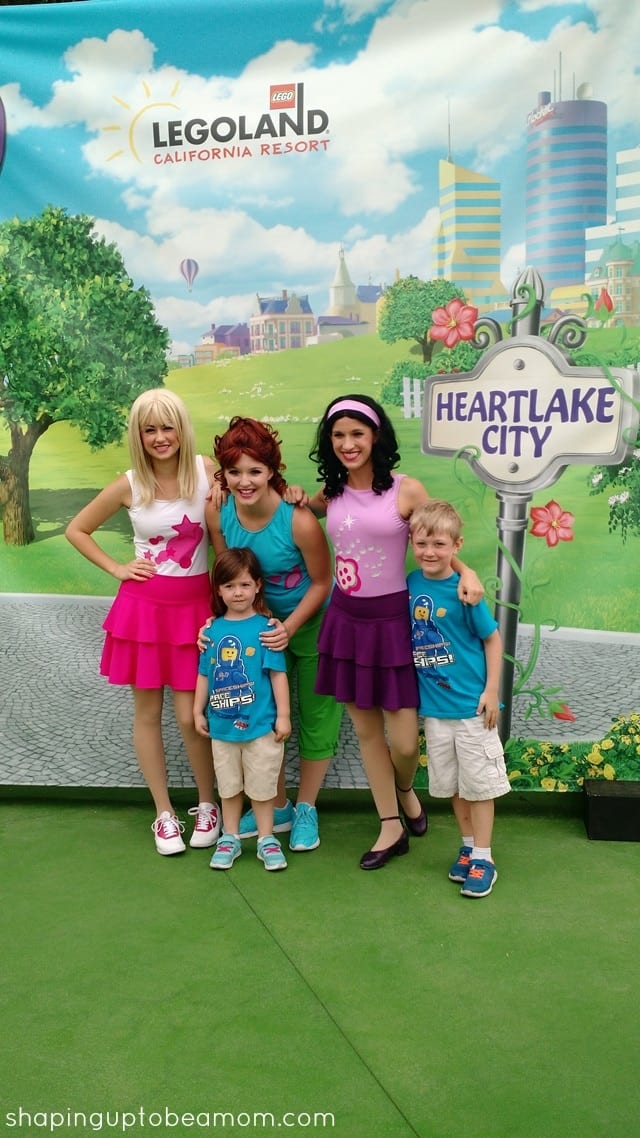 After grabbing some lunch, we found ourselves near Miniland USA, and we walked through an entire section dedicated to recreating scenes from Star Wars, LEGO-style. The newest addition is the huge LEGO Deathstar! 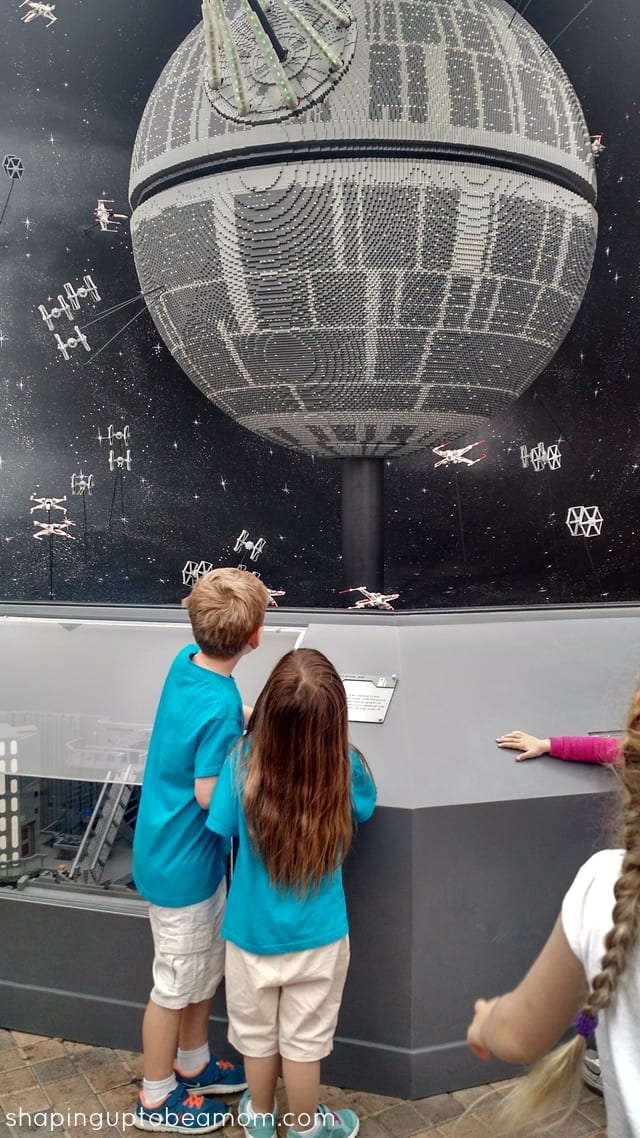 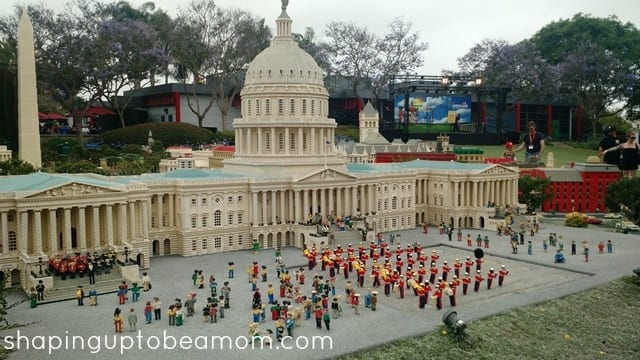 But I think my favorite was the mini LEGO Las Vegas strip! 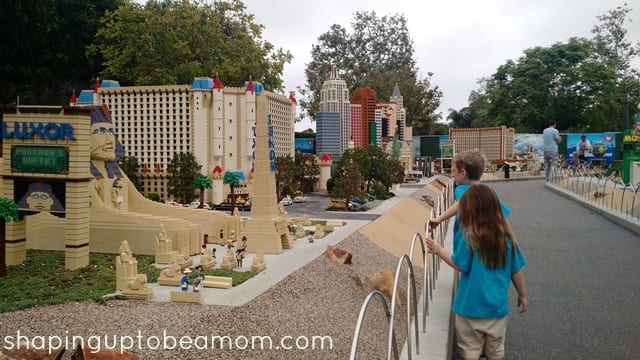 After marveling at the mini landmarks, we were ready for some more rides, so we walked over to Castle Hill. 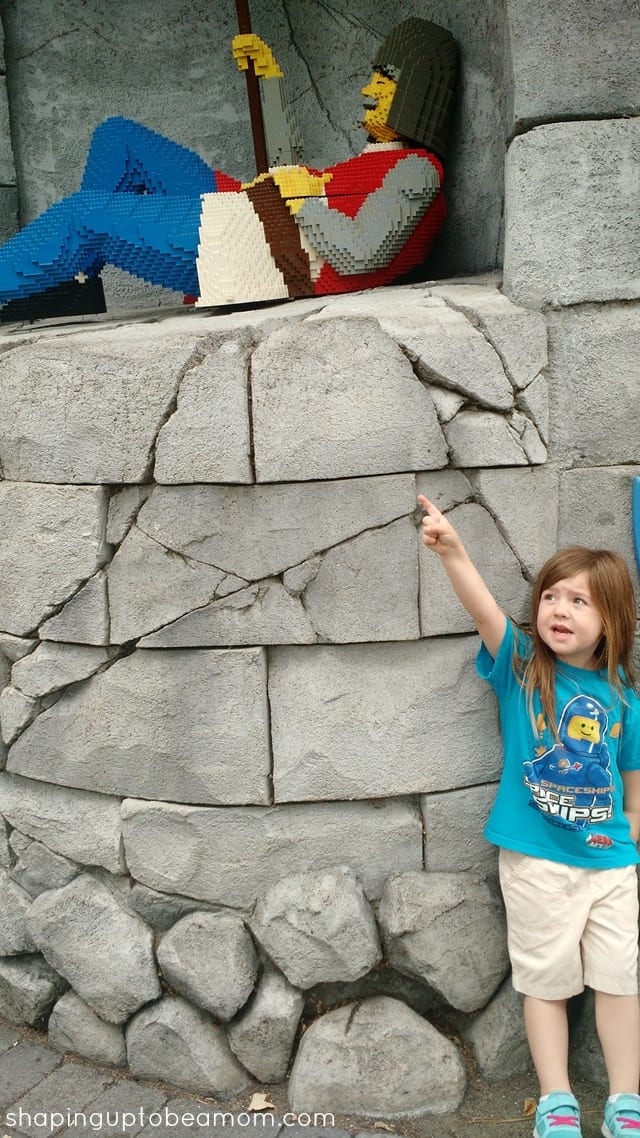 Vanessa: “My guard is sleeping!”

One of the cutest rides was the Royal Joust, where the kids get to ride their own horse around a track. 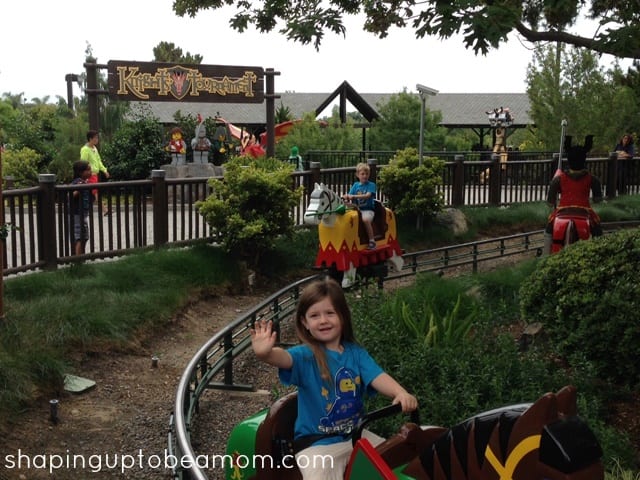 Our last area for the day was Land of Adventure, where Harry finally went on another ride, the Cargo Ace. He giggled every time the plane whipped around the corner! 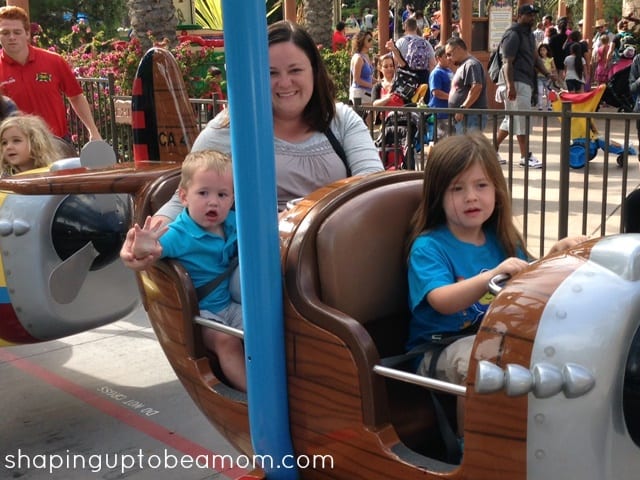 As it’s geared toward a young crowd, LEGOLAND closes earlier than some parks. We stayed until closing at 6pm, and then we made our way home. We had a great time visiting, and we plan on coming back to hit the rides and attractions that we didn’t make it to this time. 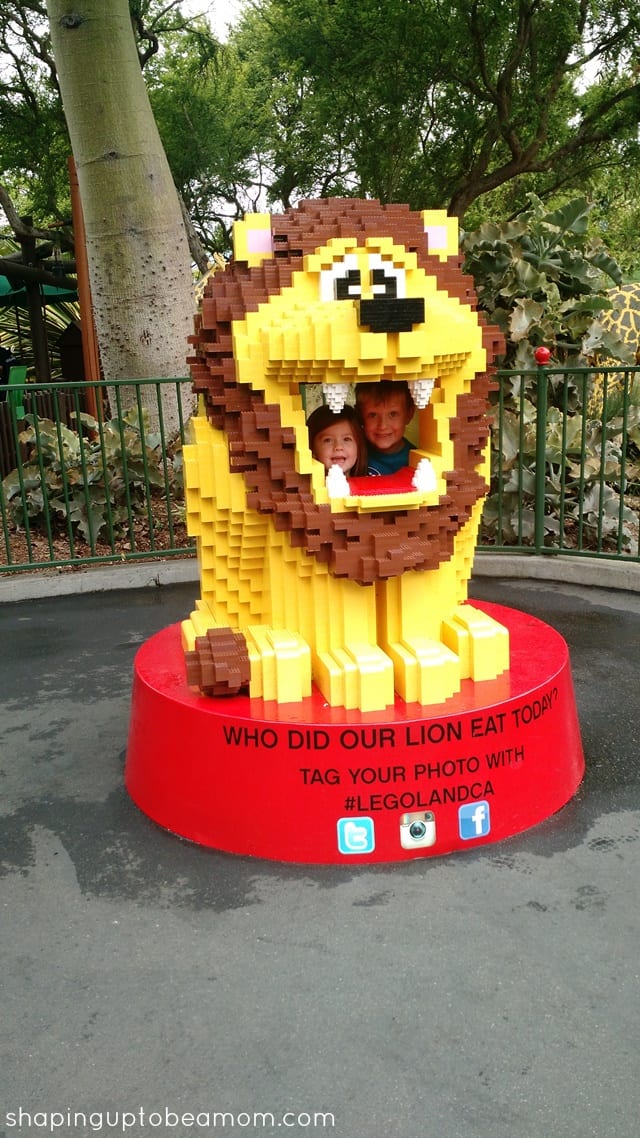 Thanks for a fun day, LEGOLAND!

The One Thing To Do Before A Blogging Conference

From Maybe To Baby: Our TTC Story

[…] Our summer was packed full of trips! We went to California at the end of May, where I attended my third Elevate Conference and we took the kids to LEGOLAND! […]

[…] out our first visit to LEGOLAND to see some other fun things to do there, and also check out our clever idea for a LEGOLAND […]

[…] busy as usual over here, but loving life. Since school ended we’ve been to California and LEGOLAND, the kids have completed a summer reading program (in one month instead of the two I thought it […]